Is The Crypto Market Too Optimistic?

There is optimism in the crypto market, despite more frequent corrective pullbacks after new highs. Are most people now having wishful thinking towards BTC? has lost 4% in the last 24 hours and is trading around $54K. For the week, it is down more than 14%. You could consider what is happening at the moment a consolidation, but after setting an all-time high of $65K, Bitcoin has continued to decline. This is not an impulsive panic decline but a consistent pressure on the value of the asset. 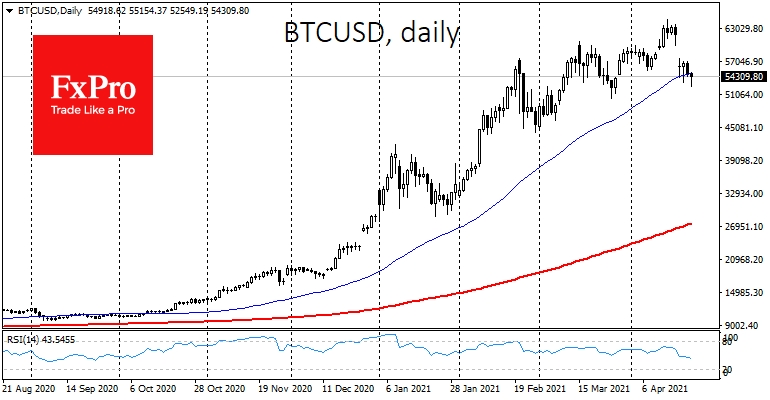 As far as technical analysis is concerned, Bitcoin's decline looks increasingly problematic as the price has fallen below its 50-day average. If it consolidates below that line at the end of the day, we could see an intensified sell-off as some short-term speculators rush to the exit in anticipation of further failure. It is likely that broad investor optimism in the late stages of the rally is keeping the market at fairly high levels.

Bitcoin's capitalization is holding above $1 trillion, while the total capitalization of the crypto market is struggling to hold around $2 trillion. Bitcoin's dominance index continues its moderate decline, but it is far from the lows we saw during the altcoin season in early 2018 when it reached 32%.

The sentiment of crypto market participants is supported by prominent analysts like Willy Woo, who believes that investors will not let Bitcoin's capitalization fall below $1 trillion due to the influx of new users and other factors. Nevertheless, logic suggests that it will run out of new buyers sooner or later. Current cryptocurrency prices are too high and risky for many investors to open new positions. The sense of fear is considerably reduced if investors are witnessing a relentless continuation of price increases, but that has not been the case for some time. As for early investors, current price levels can be quite acceptable for taking profits.

The final documents will work through all the controversial issues. Will a set of rules for cryptocurrencies become a benefit that will allow it to develop on the same scale that we have seen in recent months? It's unlikely. It is more likely that the sector's regulation will coincide with the launch of their own national digital currencies, which will be given full discretionary power to develop, suppressing unnecessary “competition”. And now the big question is whether independent cryptocurrencies will be able to defeat the states, as crypto-enthusiasts hope they will.