‘Just stay calm. It will go away’: A look back at Trump’s shifting stance on face masks and on the threat of COVID-19 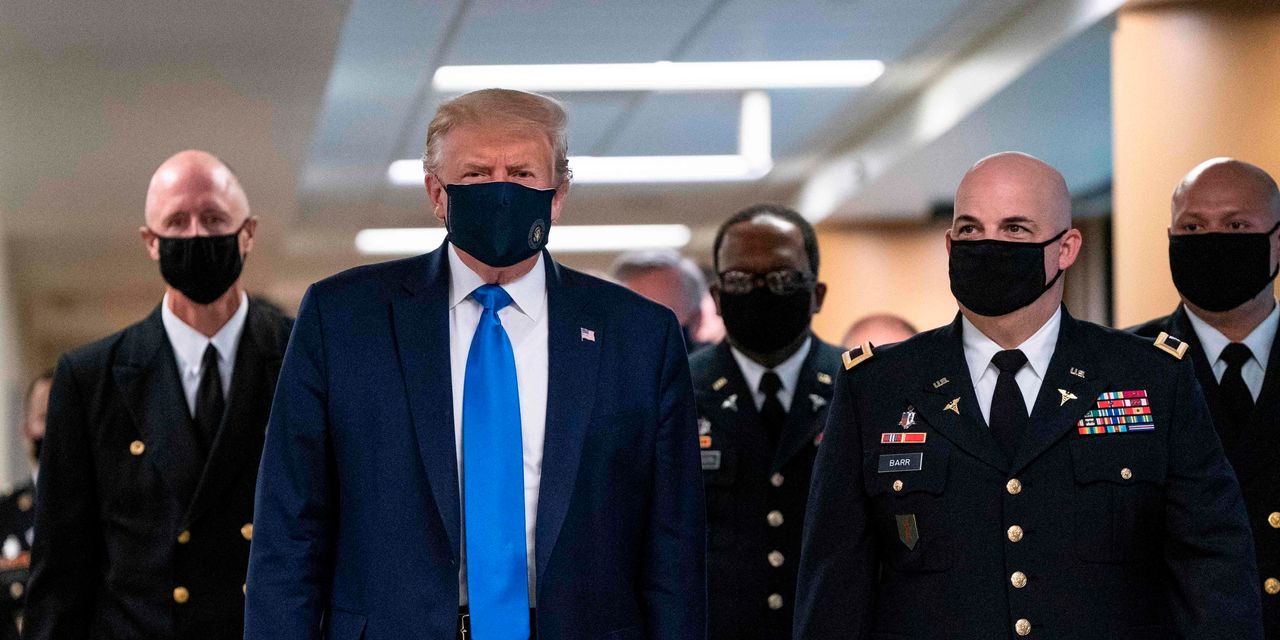 President Donald Trump was transported on Marine One from the White House to Walter Reed Hospital late Friday, the same day that he and first lady Melania Trump had tested positive for coronavirus.

Trump was given a dose of Regeneron Pharmaceuticals Inc.’s experimental neutralizing antibody cocktail, in addition to Gilead Sciences Inc.’s remdesivir, which highlights a challenge faced by the 7.3 million Americans diagnosed with the disease and many more around the world: Six months into the pandemic, there are still precious few treatment options available for patients with COVID-19, and if a vaccine becomes available, it’s unlikely to be readily available until 2021.

His diagnosis came hours after the White House announced that senior aide Hope Hicks tested positive for the virus after traveling with the president several times over the last week. Trump, 74, is at a higher statistical risk of serious complications from the virus that has killed more than 200,000 people in the U.S., analysis of hospitalization data in several countries has shown over the last six months. Being obese is another potential complication for the president.

It’s not yet clear whether the next two presidential debates with the Democratic candidate Joe Biden will go ahead; the president has canceled public engagements and campaign rallies.

Trump’s vitals over the past 24 hours were very concerning and the next 48 hours will be critical as he fights the coronavirus, The Wall Street Journal reported Saturday, citing a person familiar with the president’s health. The Associated Press attributed these comments, which contradict earlier comments made by the president’s physician, to White House Chief of Staff Mark Meadows .

Trump’s physician, Dr. Sean Conley at Walter Reed Medical Center in Bethesda, Md., where the president is staying, painted a more optimistic picture of the president’s condition. “The team and I are extremely happy with the progress the president has made,” he said. “He had a mild cough and nasal congestion and fatigue, all of which are now resolving and improving.”

Trump is at a higher statistical risk of serious complications from the virus that has killed more than 200,000 people in the U.S.

Before testing positive for coronavirus, Trump was planning to hold rallies in Wisconsin this weekend, even as the White House task force said people need to double down on social distancing “to the maximal degree possible,” the Washington Post reported. Two cities where the rallies were to take place, La Crosse and Green Bay, have been designated COVID-19 “red zones,” the paper added.

Trump has chosen not to wear a mask during most public engagements, and members of his family, including four of his children, were photographed not wearing masks during Tuesday evening’s presidential debate.

Trump has chosen not to wear a mask during most public engagements, and members of his family, including his children Eric, Don Jr., Ivanka and Tiffany were photographed not wearing masks during Tuesday evening’s presidential debate, in violation of the co-host Cleveland Clinic’s policy for the event. (It was reported by NBC News that a Cleveland Clinic doctor offered the Trump coterie medical-grade masks in hopes of persuading them to comply with the policy but was rebuffed.)

While the president had told people the virus would go away earlier in the summer, at one point even positing Easter marking the pandemic’s finish line, his position on COVID-19 and face coverings has shifted in recent months. As of Saturday, COVID-19 has now killed at least 1,030,667 people worldwide, and 208,731 in the U.S., according to Johns Hopkins. The U.S. still has the world’s highest number of COVID-19 cases (7,373,881), just ahead of India (6,473,544). The virus has infected at least 34,758,446 worldwide.

The U.S.’s mask policy has evolved in recent months. Last January, the Centers for Disease Control and Prevention said it did not recommend the general public wear masks. “The virus is not spreading in the general community,” Dr. Nancy Messonnier, director of the Center for the National Center for Immunization and Respiratory Diseases, said. “We don’t routinely recommend the use of face masks by the public to prevent respiratory illness.”

The president’s stance has shifted along with his administration’s on both the severity of COVID-19 and mask wearing.

Here’s a timeline of Trump’s comments:

February: During an interview with journalist Bob Woodward for “Rage,” a biography on the president, Trump told him that the coronavirus was “deadly stuff.”

Feb. 2: “We pretty much shut it down coming in from China,” the president tells Sean Hannity of Fox News.

Feb. 10: Trump tells a campaign rally in New Hampshire: “Looks like by April, you know, in theory, when it gets a little warmer, it miraculously goes away. I hope that’s true. But we’re doing great in our country.”

Feb. 26: Trump is asked what the U.S. is doing to boost production of masks. “Well, we can get a lot of it. In fact, we’ve ordered a lot of it just in case we need it. We may not need it; you understand that. But [just] in case — we’re looking at a worst-case scenario. We’re going to be set very quickly.”

March 9: Trump compares coronavirus to influenza, tweeting: “Last year 37,000 Americans died” from the flu. “Nothing is shut down, life & the economy go on,” he added. One week later, the president said, “Nothing would be worse than declaring victory before victory is won.”

March 10: “Just stay calm. It will go away,” the president tells reporters in Washington, D.C.

‘You don’t have to do it. I’m choosing not to do it, but some people may want to do it and that’s OK. It may be good. Probably will.’

March 16: The president announces new social-distancing guidelines: “My administration is recommending that all Americans, including the young and healthy, work to engage in schooling from home when possible, avoid gathering in groups of more than 10 people, avoid discretionary travel, and avoid eating and drinking at bars, restaurants, and public food courts.”

April 2: On the shutdown of businesses as the virus reached its peak, Trump says, “The sacrifices we make over the next four weeks will have countless American lives saved. We’re going to save a lot of American lives.”

April 3: Trump says his administration recommends wearing cloth face coverings. However, the president says he won’t wear a mask himself. “From recent studies, we know that the transmission from individuals without symptoms is playing a more significant role in the spread of the virus than previously understood,” Trump said, adding, “You don’t have to do it. I’m choosing not to do it, but some people may want to do it and that’s OK. It may be good. Probably will.”

April 24: Speaking of potential treatments, Trump tells a press conference: “I see the disinfectant which knocks it out in a minute. One minute. And is there a way we can do something like that? By injection inside for almost a cleaning? Because you see it gets in the lungs and it does a tremendous number on the lungs, so it’d be interesting to check that.”

“Supposing we hit the body with a tremendous — whether it’s ultraviolet or just very powerful — light and, I think you said, that hasn’t been checked but you’re gonna test it? And then I said, ‘Supposing it brought the light inside the body, which you can either do either through the skin or some other way?'”

(Trump later said he was being “sarcastic.”)

May 19: “When we have a lot of cases, I don’t look at that as a bad thing, I look at that as, in a certain respect, as being a good thing,” Trump said, on the rise in cases of coronavirus infections. “It means our testing is much better. I view it as a badge of honor.”

I wore one in the back area. I didn’t want to give the press the pleasure of seeing it.’
—President Trump speaking on May 21 about his decision to not wear a mask while visiting a Ford plant

May 21: On whether or not the president wore a mask while visiting a Ford factory, he said, “I wore one in the back area. I didn’t want to give the press the pleasure of seeing it.”

July 4: “We have tested over 40 million people. By so doing, we show cases, 99% of which are totally harmless.”

July 19: “I’ll be right eventually,” Trump said during an interview with Fox News journalist Chris Wallace. When Wallace laughed, Trump continued: “I said it’s going to disappear. I’ll say it again: It’s going to disappear — and I’ll be right.” When asked if such statements discredit him, Trump said no, adding, “You know why it doesn’t discredit? Because I’ve probably been right more than anybody else.”

On testing lagging behind the rise in cases, Trump adds, “Many of those people are young people that would heal in a day. They have the sniffles.” Trump will not change his position on masks. “No, I want people to have a certain freedom,” he said, adding, “I don’t agree with the statement that if everyone wears a mask everything disappears.”

July 20: Trump tweets a photo of himself wearing a mask with a presidential seal. “Many people say it is Patriotic to wear a face mask when you can’t socially distance.”

July 21: At the president’s daily presser, Trump said, “I have no problems with the masks. If you’re close together, I would put on the mask.” In response to a question about whether he’d experienced a change of heart on both masks and social distancing. “I’m getting used to the mask … I will wear it where appropriate. I’ve always agreed with that. I’ve never fought either one.”

Aug. 27: “The United States has among the lowest case fatality rates of any major country anywhere in the world.”

Sept. 16: In an ABC town hall, Trump responded to a question that he had played down the virus, given his comments in Woodward’s book. “Yeah, well, I didn’t downplay it. I actually, in many ways, I up-played it, in terms of action,” the president said.