Kusama Is A Cryptocurrency Success While Algorand Endures A Bumpy Ride

This article was written exclusively for Investing,com

The cryptocurrency asset class rose to a new high in April and May as the two leaders, and , rallied to over $65,000 and $4,400 per token, respectively. Other cryptos, even those that began as a joke like , experienced incredible and parabolic rallies that created massive profits for those with the foresight to tuck the tokens away in their computer wallets.

Nothing supports a burgeoning market like an aggressive bull market. The ascent of Bitcoin, Ethereum, and other cryptos has caused thousands of new tokens to burst on the scene. While many may have unique utility, the underlying force driving the token prices and growing interest is the opportunity for investors and traders to profit beyond their wildest dreams.

There are few, if any, investments in my lifetime like Bitcoin that offered the chance to turn $10 into over $10 million. Lotto-like returns have market participants mining and buying what could be diamonds in the rough that will deliver fortunes over the coming weeks, months, and years. Meanwhile, the vast majority of tokens will wind up as dust collectors in computer wallets. The top-tier tokens with substantial market caps offer the required liquidity for traders and are most likely to survive. (KSM) and (ALGO) are in the top 35, putting them in an exclusive club with only around one-third of one percent of all of the cryptos.

The leaders sit closer to the recent lows than the highs

A couple of tweets from Elon Musk at Tesla (NASDAQ:) announcing the decision not to accept Bitcoin for its EVs may have caused some selling in Bitcoin, but it was China’s ban, as it rolls out a digital yuan that caused the end to the parabolic move in the leading cryptocurrencies.

The number of new tokens continues to rise

The total value of the asset class reached a high of nearly $2.5 trillion in April and early May when Bitcoin and Ethereum reached their respective highs. The correction sent it back below the $1.6 trillion as of June 9. Meanwhile, Apple (NASDAQ:) is the world’s largest company by market cap, with a value of around $2.122 trillion. The bottom line is that the asset class remains relatively small even though the number of tokens continues to rise. The emerging cryptocurrencies are quenching the market’s speculative appetite as they represent new lotto tickets that attract buying.

There is a difference between trading and investing. In the world of cryptocurrencies, it is essential to make the distinction. Investments are passive, as speculators pay for a token and hold them on platforms or computer wallets, hoping they will deliver Bitcoin, Ethereum, or Dogecoin returns. Trading involves buying and selling cryptos for profit, which depends on liquidity that creates tight bid-offer spreads allowing for efficient executions of buy and sell orders. Only a handful of cryptos offer liquidity levels that make them potentially attractive to traders.

Kusama is the 29th leading crypto

Kusama ranked 29th in the cryptocurrency asset class on June 9 with a $3.937 billion market cap at the $466 per token level. KSM is a scalable network of specialized blockchains Substrate and almost the same codebase as (DOT), the ninth leading cryptocurrency with a $21.4 billion market cap. Substrate is a modular framework enabling the creation of purpose-built blockchains by composing custom or pre-build components or a library that helps build or craft custom logic. You can learn more about Kusama on its website. 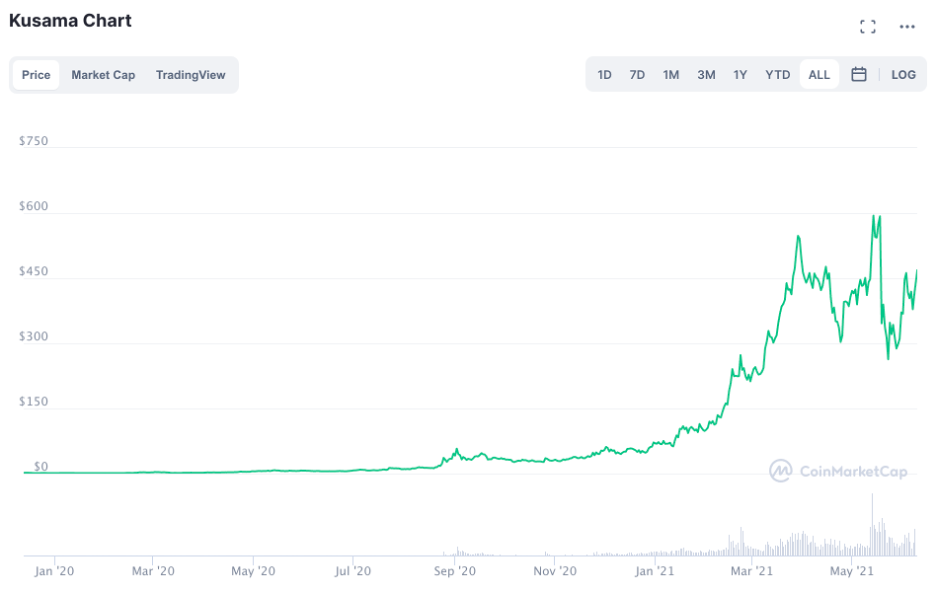 The chart shows that since late 2019, KSM appreciated from below $2 per token to a high of nearly $600 in May 2021. KSM is another success story for investors who got in on the token early. Daily trading volume of around $678.5 million allows for liquidity for buyers and sellers.

Algorand (ALGO) is 34th on the digital currency hit parade with a $3.275 billion market cap at $1.07 per token. The public version of the Algorand is a decentralized blockchain-based network that enables developers to create new applications fueled by cryptocurrency. The ALGO platform has real estate, copyright, microfinance, and other applications. ALGO’s website describes the protocol, vision, and mission in detail. 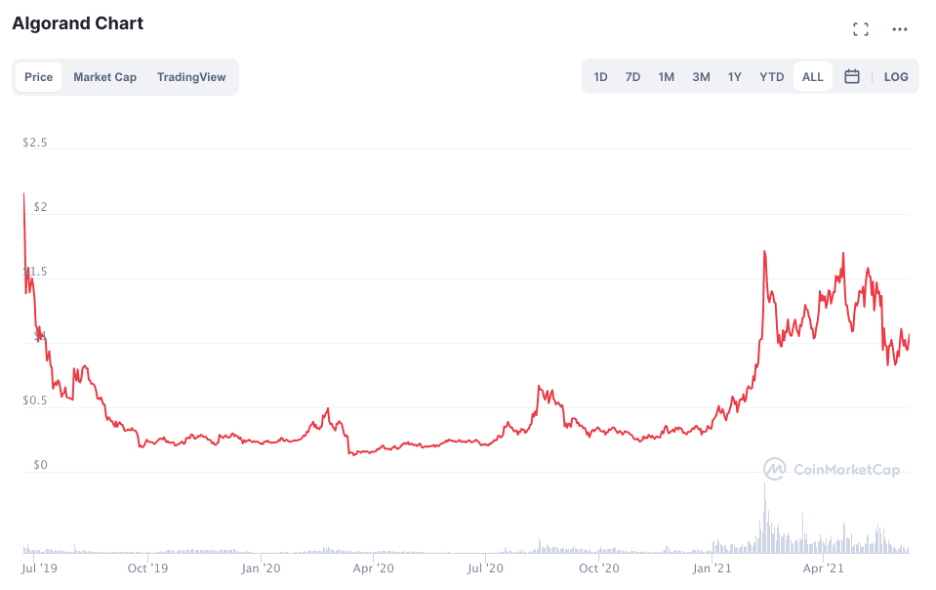 Only risk what you can lose

When buying any cryptocurrency from the most to the least liquid, the best advice is to only risk capital you are willing to lose. The high level of volatility and uncertainty of future regulations and government intervention makes any investment in the asset class a dangerous venture.

Trading is another story as liquidity is the most crucial factor. Trading requires executing buy and sell orders on a tight bid-offer spread. The most critical mass or higher the market cap, the better the liquidity for traders looking to move in and out of risk positions in the cryptocurrency arena.