May Mayhem Roils Bitcoin: Is Another Crypto ‘Winter’ Upon Us?

Essentially every major cryptoasset across the board has fallen precipitously over the last 24 hours, but traders will always focus on as the leader and most important component of the emerging asset class. While Tesla Motors (NASDAQ:) CEO Elon Musk’s recent criticisms of Bitcoin’s environmental impact are no doubt still weighing on the cryptocurrency, the immediate catalyst for the collapse was an announcement by China’s central bank that financial institutions should not offer clients any cryptocurrency services including currency exchanges, registration, trading, clearing, and settlement.

As a reminder, 75% of Bitcoin mining takes place in China and the CCP is keen to promote its own digital for payments in the Chinese economy. Adding insult to injury, many major crypto brokerages suspended trading amidst the ensuing volatility.

So does this confluence of bearish news and horrendous price action mark the end of the Bitcoin bull market and a new crypto “winter”? Time will tell, but we’re skeptical.

Any time markets are volatile, it helps to take a step back and review the historical data. While Bitcoin’s current plunge certainly feels terrifying for bulls in the moment, experienced “hodlers” know that Bitcoin routinely sees steep selloffs during bull markets. As the chart below shows, Bitcoin saw seven separate -30% pullbacks before finally peaking in its 2015-2017 bull market:

For reference, the current drawdown is “only” the third -30% pullback of the current bull cycle, though at -55% from the intraday peak to the intraday trough, it is larger than any of the selloffs seen in 2016 or 2017. It’s also worth noting that Bitcoin is trading below its 200-day EMA as we go to press, a level that was never broken in the 2015-2017 bull market.

As we noted in our review of Bitcoin’s price history last month, the price gains in the current bull market cycle are still below the historical average, raising hopes that the bull market remains alive and well, despite today’s big drop. Another ratio to watch is Bitcoin’s MVRV Z-Score, a measurement of Bitcoin’s market capitalization (market value) relative to the prices at which every bitcoin was last transacted (realized value).

At past bull market peaks, this ratio has always reached at least 11, whereas the peak for this cycle (so far) only rose to about 8: 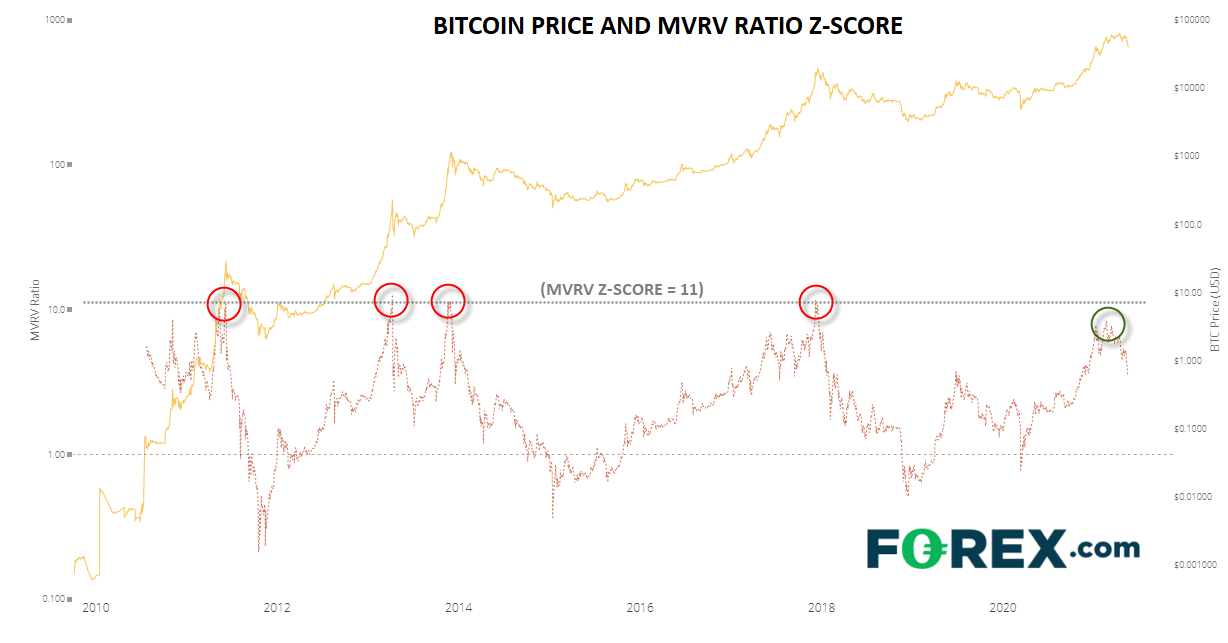 Of course, any historical analysis of a dozen year-old asset class can only tell us so much, but the above analysis suggests that Bitcoin’s current price action is not abnormal for a bull market cycle and that prices could still resume their recent uptrend before forming a longer-term peak.

In other words, long-term bullish traders shouldn’t necessarily get out their coats and hats in preparation for a crypto “winter” quite yet!