The popular wallet has reached 5 million monthly active users thanks to DeFi growth.

MetaMask has seen its usage stats grow significantly over the past six months, according to a report from ConSensys.

In the past six months, MetaMask usage has grown by a factor of five, as the Ethereum and DeFi wallet now has 5 million monthly active users (MAUs) on desktop and mobile.

It also says that accumulated transaction volume has doubled to $2 billion after hitting $1 billion last month. 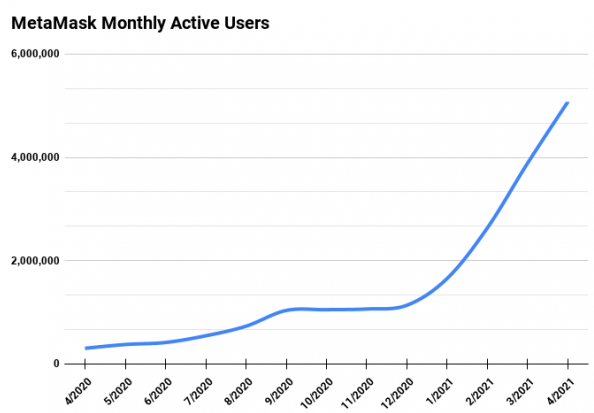 The availability of the mobile app in developing countries has contributed to growth. ConsenSys believes that MetaMask’s quick growth stems from interest in the Global South, with India, Indonesia, Nigeria, and Vietnam leading the way in terms of adoption.

ConsenSys suggests that its app is popular in developing countries because many users in those areas trust crypto over traditional banking services, or cannot access banking services at all. “Increasingly, [they] use MetaMask to earn a supplemental income or to make long-term investments,” ConsenSys says.

Other Uses For MetaMask

Global adoption is not the only factor driving MetaMask’s growth.

Additionally, MetaMask’s new swap feature is increasingly being used by traders to find the best rates across multiple decentralized exchanges. It charges a significant 0.875% service fee.

Finally, ConsenSys drew attention to the NFT boom, which has attracted users to tokenized artwork, game items, and collectibles. ConsenSys says that NFT transfers are the second most common use case for MetaMask after token swaps.