‘s price stability does not make crypto market participants happy at all. Such a lull is perceived as a harbinger of a storm. Bitcoin's high volatility has always been its characteristic feature, and the trend of rapid growth has attracted speculators counting on quick profits. Periods in narrow trading ranges often ended in severe selloffs. That is happening now as Bitcoin is locked in a narrow trading range with a sequence of lower highs.

Approaching the $30K could trigger an avalanche of sell orders

Approaching the $30K round level and its subsequent breakdown could trigger an avalanche of sell orders, while buyers may be in no hurry to help the benchmark cryptocurrency. This time, many crypto market participants are ready to see new lows on Bitcoin before new long-term purchases.

Bitcoin begins the work week—at time of writing—with a slight 1% decline and is trading around $32,000. Another worrying sign for the first cryptocurrency was the pause in hash rate growth. Miners are moving in after new activity from the Chinese authorities. And as this process unfolds, it is becoming apparent that it is significantly more complex and costly.

The Bitcoin network's hash rate has never recovered to its peak and is currently at levels of late October 2019. An automatic decline should soon follow this in complexity. It is accepted that Bitcoin's price follows the hash rate/complexity of mining, so the investment outlook is deteriorating for now.

A correction in the could negatively contribute to the short-term dynamics of the crypto market. In this case, a correlation of the benchmark equity index and Bitcoin may well show its full potential, as similar cautionary sentiment prevails in both markets.

On the positive side for the market, PayPal's (NASDAQ:) announcement of an increase in the weekly cryptocurrency purchase limit from $20K to $100K and the elimination of annual purchase limits. This applies only to U.S. users of the payment system. However, given the fundamental role of the U.S. in the formation of the cryptocurrency market, such news could well support the market globally. 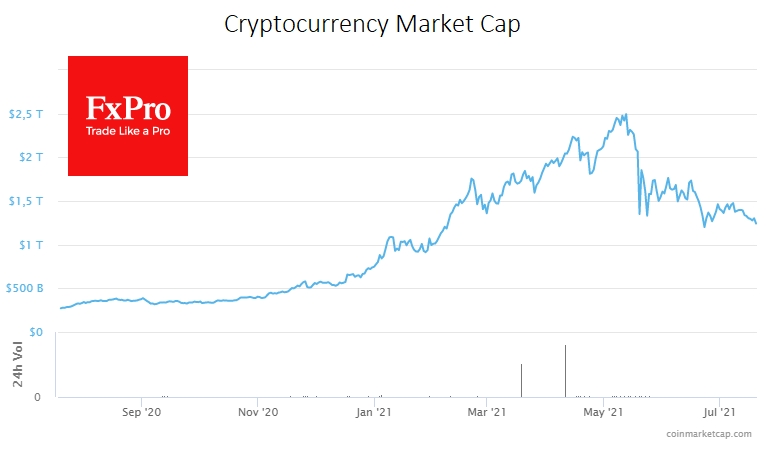 Crypto market capitalisation has halved from its peak

From this year's peak, the total capitalization of the crypto market has fallen by exactly half to $1.27 trillion. Without serious support, we will probably continue to see the crypto market decline down to values that would seem attractive to large investors to open large positions.