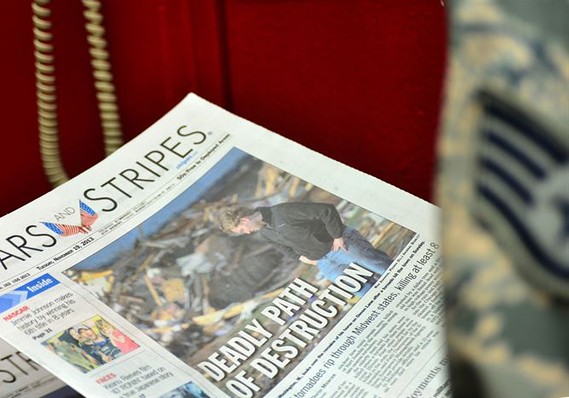 It was reported early Friday, initially in a USA Today op-ed, that the Pentagon was ordering the all but immediate shutdown of the military newspaper Stars and Stripes, going so far as to call on the publication in a recent memo to map out a plan “for vacating government owned/leased space worldwide,” but, by late afternoon, President Donald Trump was disowning his administration’s move.

“The last newspaper publication (in all forms) will be September 30, 2020,” wrote Army Col. Paul Haverstick Jr., director of defense media activity at Fort Meade, Md., whose signature appears on the Pentagon memo.

The op-ed bringing to wide public attention the Stars and Stripes decision had been the week’s third sharp blow to Trump’s political positioning as a champion of the military and veterans, having been published just hours after a firestorm erupted with the publication of an Atlantic story by Jeffrey Goldberg, the magazine’s editor-in-chief, depicting the president questioning why an intelligent person would serve in the military and disparaging American war dead as suckers and losers. That came just a few days after a Military Times poll showed Trump losing support among active-duty military.

Stars and Stripes, which would have marked its 159th anniversary in early November, recently reported that a bipartisan group of more than a dozen U.S. senators had appealed to Defense Secretary Mike Esper to continue funding the publication.

The House, according to the USA Today opinion piece, penned by University of Missouri free-press scholar Kathy Kiely, specifically sought to reverse the zeroing out in Trump’s proposed fiscal 2021 budget of the newspaper’s $15.5 million annual subsidy.

That sum, Kiely wrote in an echo of the senators’ letter, is negligible against the backdrop of the Defense Department’s overall budget of some $700 billion but is enormously impactful for the paper’s 1.3 million readers and “would eliminate a symbol of the U.S. commitment to press freedom.”

A sampling of reaction on social media to the report that Stars and Stripes would be shut down:

The Trump tweet that appeared to walk back the decision, promising that “under [his] watch” the Stars and Stripes funding would remain intact:

From the archives (February 2020):Military newspaper Stars and Stripes set to lose half its funding as Pentagon shifts budget priorities

Libra rebrands to Diem, hoping to shake off associations By Cointelegraph