The availability of ETFs in Canada is dissolving the premium.

Two Bitcoin ETFs in Canada by Purpose Investments and 3iQ added a total of 10,700.9033 BTC in February, more than two-thirds of Grayscale’s monthly inflow.

Grayscale is losing the number one spot as the most popular Bitcoin investment product for institutional investors.

The GBTC trust saw a net inflow of 6,599.9 BTC in February, as measured by Glassnode. The inflow was significantly less—about 85 %—than the previous month when the fund added 41,568 BTC.

The second Bitcoin ETF by the 3iQ fund saw an inflow of 485 Bitcoins, following the addition of 4,889.9 BTC in January.

According to J.P. Morgan’s analysis shared by media outlet The Block, the Canadian Bitcoin ETF is one of the two reasons behind a Grayscale premium drop.

The second reason is profit-booking by investors after the end of the six-month lock-up period. The inflows in August 2020, six-months prior to February, were around 31,900 BTC, according to data from Bybt. The fund, in turn, only added around 6,600 BTC. 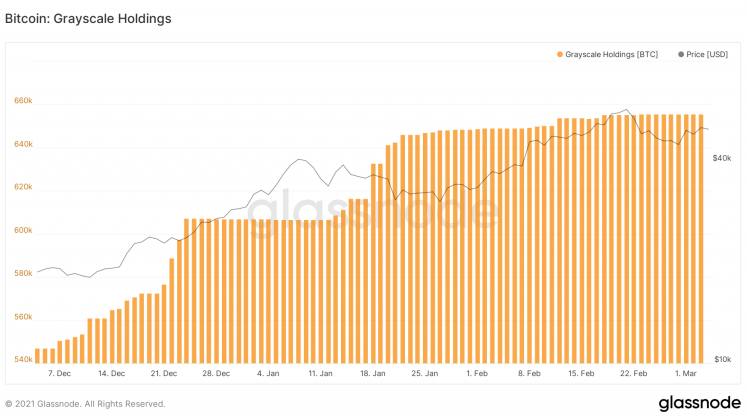 In their earlier report in January, the investment bank had stated that the introduction of an ETF in the U.S. would eat into GBTC’s premium and cause a downturn in Bitcoin’s price. J. P. Morgan’s analyst added this week:

“We had also argued that erosion of GBTC inflows and a collapse of its premium would likely have negative near-term implications for bitcoin markets given the flow and signalling importance of GBTC.”

Grayscale’s premium in crypto trust shares is driven by demand from investors on professional brokerages like Fidelity, Charles Schwab, TD Ameritrade, and others. The new Bitcoin ETFs do not come with a lock-in period. Thus, the supply of these products is not limited to the issuance of GBTC shares.

The premium for GBTC slid negative yesterday and is currently below the fund’s annual management fee of 2%—effectively a negative premium—at 1.82%.

Given that arbitrage opportunities drove institutional investment, the reduced premium alternates as cause and effect, starting to hurt the demand due to the reduced intensity of the “Grayscale effect.”