Q2 Cryptocurrency Review: It Was A Wild And Volatile Quarter; 4 Issues Ahead

The second quarter of 2021 was an incredibly wild ride in the cryptocurrency asset class. , which was at five cents per token eleven short years ago, rose to over $65,000. The price of the leading cryptocurrency exploded before imploding.

Bitcoin reaching its peak on Apr. 14, the day that Coinbase Global (NASDAQ:) listed shares on NASDAQ. The stock rose to a high of nearly $430, giving the trading platform an almost $100 billion valuation. At the high, COIN was worth more than the CME and ICE—two established trading platforms. Bitcoin and COIN halved in value following the spike and blow-off highs.

Investors and traders were drawn to the crypto asset class as the magnetic forces of the unprecedented parabolic price action are powerful. The rally ran out of upside steam, leading to price carnage.

As we head into Q3, the libertarian form of money faces challenges, but devotees believe that the price correction is nothing more than a speedbump that creates another buying opportunity. Some opponents continue to believe cryptos are dangerous. Charlie Munger, Warren Buffett’s 97-year-old partner, called them “disgusting and contrary to the interests of civilization.”

Notwithstanding Munger's opinion, when it came to performance, the multi-year bullish trend continued, but the asset class lost value in Q2.

New highs but a bearish quarter for cryptos

The leaders move in opposite directions

Bitcoin’s price explosion, that took it to a high on Apr.14, then turned into an implosion.

The selling began after Elon Musk decided miners were leaving too much of a carbon footprint, prompting his company, Tesla (NASDAQ:), to suspend accepting Bitcoin for the automaker’s EVs. However, furious selling came as China cracked down on mining and other activities as the country prepares to roll out its .

Bitcoin fell by just over 42% in Q2. While many other tokens followed the leader, moved higher in the second quarter, but not before halving in value.

The leading cryptocurrencies moved in opposite directions in Q2, but both settled closer to the lows than the highs over the period.

Dogecoin was no joke in Q2 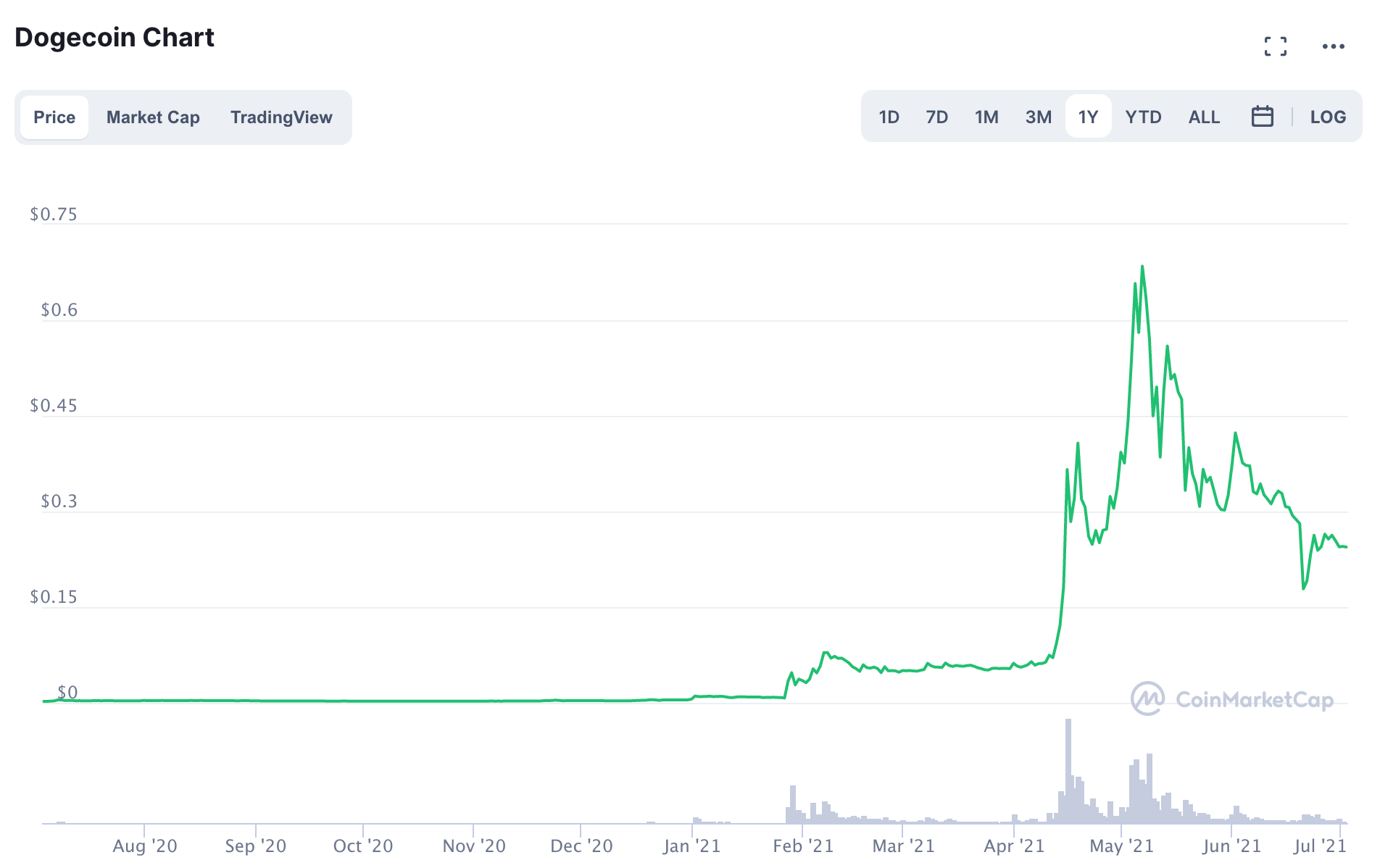 DOGE was no joke as Elon Musk and a host of celebrities embraced the cryptocurrency pushing the market cap to the $32 billion level and into sixth place above , , , and many other high-flying cryptocurrencies at the end of June.

Impressive rise in the number of tokens but dilution too

The number of cryptos continues to increase, prompting miners and speculators to throw money at new issues hoping to own a piece of the next token that will deliver returns seen in Bitcoin, Ethereum, Dogecoin, and many other leading cryptocurrencies.

Meanwhile, as the market cap declines, the constant flood of new entries dilutes the asset class. Many of the over 10,700 will wind up as dust collectors in computer wallets. However, the speculative fervor will continue until the memories of incredible riches fade into history.

What’s ahead for the cryptos?

As we head into Q3 and the second half of 2021, at least four issues will continue to plague the burgeoning asset class:

Custody, security, and carbon can be addressed by technology. Regulation and government control are another story. I expect these issues to mount as the asset class’s market cap rises over the coming months and years. As of the beginning of the second half of 2021, governments hope they will not have to address the issue as the market cap dropped. Do not expect them to sit idly by if it begins to rise at a rate seen until April and May 2021.

I see lots of value in blockchain and the cryptocurrency revolution. However, I think we will see it divided into two groups, cryptos and digitals. The cryptos will continue to embrace the libertarian view of money. Digital yuan, dollars, euros, and other currencies, along with a growing number of , will populate the digitals.

Meanwhile, expect lots of volatility in cryptocurrencies over the coming months as speculative interest will only increase.