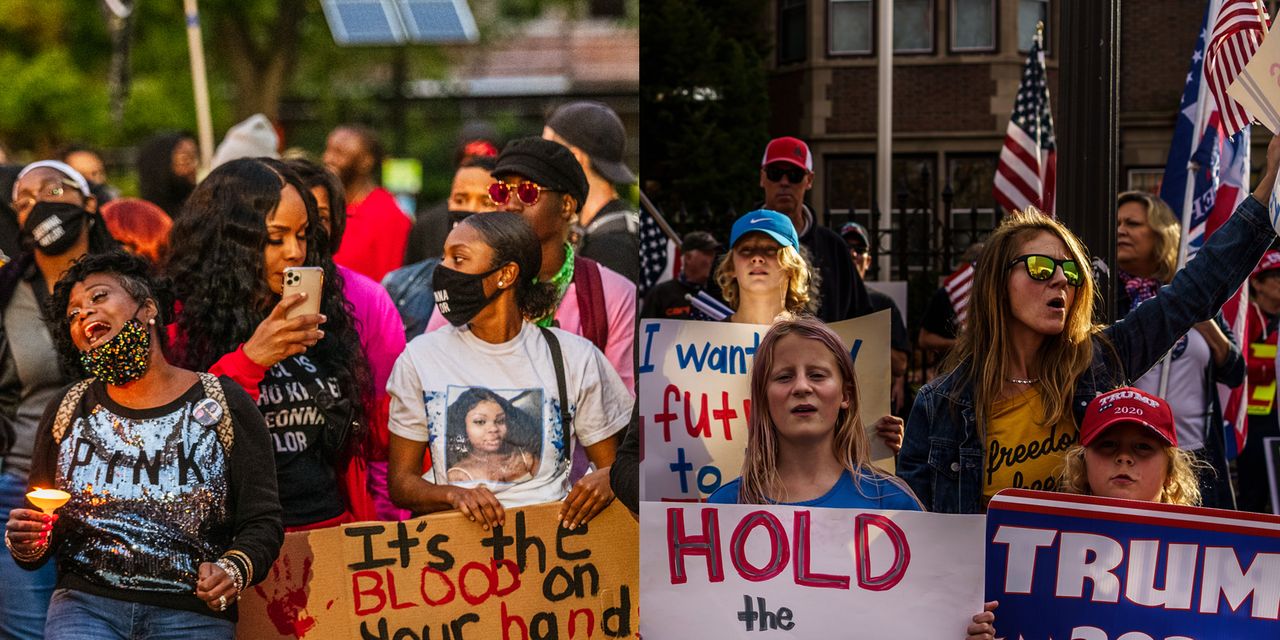 2020 has been a year of protests, with millions of people taking to the streets to express their views on racial injustice, pandemic shutdowns, and in the past few days, the results of the presidential election.

Lawmakers in some states have responded to this year’s wave of marches and rallies by creating harsher criminal penalties for demonstrators. In Tennessee, for instance, after months of racial justice protests outside the state capitol, the Republican governor signed a bill making it a felony to camp out on state property during a protest. People convicted of this crime will lose their right to vote.

In Florida and Texas, the results of the Nov. 3 election could help advance legislative proposals to rein in protesting from a new angle: the money side.

Republicans maintained majorities in both state legislatures, suggesting that the states’ Republican governors will be able to move forward with proposals they made in September to crack down on violent protests by creating new criminal penalties related to the funding of demonstrations.

In Florida, Gov. Ron DeSantis wants to create several new criminal offenses, including prosecuting “anyone who organizes or funds a violent or disorderly assembly” under the state’s anti-racketeering laws. In Texas, Gov. Greg Abbott proposed six new criminal offenses aimed at people who “hijack peaceful protests,” including one that outlaws “aiding and abetting riots with funds or organizational assistance.”

“Some people participate in riots without ever being there,” Abbott said when he announced the proposed penalties. “What they do is they aid and they abet riots with funds or organizational assistance. This will be a felony that will lead to jail time.”

“
‘No matter our political beliefs or philosophies, it should concern everyone when the government tries to infringe on our rights to protest.’
”

Both governors have said they support the First Amendment right to peacefully protest, but want to protect citizens against protests that devolve into destructive or violent riots. To move forward, both the Florida and Texas proposals will need support from state legislators.

Neither governor’s press office responded to requests for more detail on the proposed penalties, including questions on whether they could mean jail time for people who either work for or donate money to a nonprofit group that’s involved in a protest where violence breaks out.

‘Everyone can be held accountable’

That’s the scenario that worries Chas Moore, the founder and executive director of the Austin Justice Coalition, an Austin, Texas-based nonprofit that works to improve racial and economic equity.

“It seems as if, if people are a part of a protest, whether it’s physically or financially, and it goes the least bit [out of control], then everyone can be held accountable,” Moore said, referring to the Texas governor’s proposal to penalize those who aid or abet “riots with funds or organizational assistance.”

AJC was founded in 2015, and before this year, the group had taken a break from street protesting to direct energy toward other forums where it could affect change, such as city-council meetings, Moore said.

But after the death of George Floyd, the Black man killed in police custody in Minneapolis in late May, AJC joined with other community groups for a June march and rally that was peaceful, according to local news reports. In September, the group organized a march in solidarity with Breonna Taylor, the Kentucky woman killed by police.

AJC has also helped other community groups stage protests by providing supplies such as water and sound systems, Moore said.

“
DeSantis said that while the right to peaceful protest is one we cherish as Americans, his proposal would take aim at ‘professional agitators, bent on sowing disorder and causing mayhem in our cities.’
”

Moore said he’s worried that under Abbott’s proposal, his group — or its donors — could potentially be subject to criminal penalties if it were involved in a protest and “some knucklehead” showed up and “started doing crazy stuff.”

“I think [Gov. Abbott] is trying to take away the power of the community to be in the streets,” Moore said. He noted that Abbott’s proposal doesn’t specify what the difference between a protest and a riot is, and he worries about how law enforcement could apply that definition.

‘Who’s to know what the next protest movement may be about in our country?’

In Florida, ACLU of Florida staff attorney Jackie Azis said DeSantis’s proposal could potentially affect organizations like a local foundation in St. Petersburg that has supported racial-justice protests this year by providing signs. She called it “an outrageous response” that DeSantis is proposing using the state’s RICO Act — a set of anti-racketeering laws — to prosecute people who organize or fund disorderly or violent assemblies.

“Peaceful protesting is something we value as Americans. It’s embedded in our Constitution. No matter our political beliefs or philosophies, it should concern everyone when the government tries to infringe on our rights to protest,” she added. “The governor may not agree with police accountability; however, who’s to know what the next protest movement may be about in our country?”

“
‘The fear here is that it will have this really chilling effect. A group or a funder could be concerned that they’re going to be held liable or tied up in court just for funding a protest where unlawful activity then occurs.’
”


— Nick Robinson, a legal advisor at the International Center for Nonprofit Law

Azis said DeSantis’s proposal seems designed to “instill fear” in people who want to protest or provide money or other resources for protests. “The way it’s currently written, it appears that anyone could be on the hook for something like providing a sign for a peaceful protest,” she said.

When he announced the proposed legislation, DeSantis said that while the right to peaceful protest is one we cherish as Americans, his proposal would take aim at “professional agitators, bent on sowing disorder and causing mayhem in our cities.”

The latest in a wave of anti-protest laws

The Texas and Florida proposals are just the latest in a wave of attempts by both federal and state lawmakers to criminalize aspects of protesting. They appear to be the first to target financial supporters of protests.

Attempts to strengthen protest laws are often a reaction to high-profile activism, said Nick Robinson, a legal advisor at the International Center for Nonprofit Law, which tracks freedom-of-assembly laws.

For example, both state and federal lawmakers attempted to outlaw protesting near “critical infrastructure” after the 2016 battle to stop the Dakota Access Pipeline. New laws were also proposed after campus protests over controversial on-campus speakers, and in response to early protests in the Black Lives Matter movement.

Though the proposed laws in Texas and Florida have yet to be written, they appear to be part of the same “concerning trend,” Robinson said.

“The fear here is that it will have this really chilling effect,” Robinson said. “A group or a funder could be concerned that they’re going to be held liable or tied up in court just for funding a protest where unlawful activity then occurs.”

Robinson and Azis, the ACLU of Florida attorney, both noted that while Republican governors are behind these particular attempts to control protests, people of all political persuasions should take note when the government attempts to interfere with free speech.

“This isn’t a left or right issue at all,” Robinson said. “Protest is central to our political tradition. These proposed laws that could be used to go after funders of protests create a slippery slope that can then undermine all of our First Amendment freedoms.”