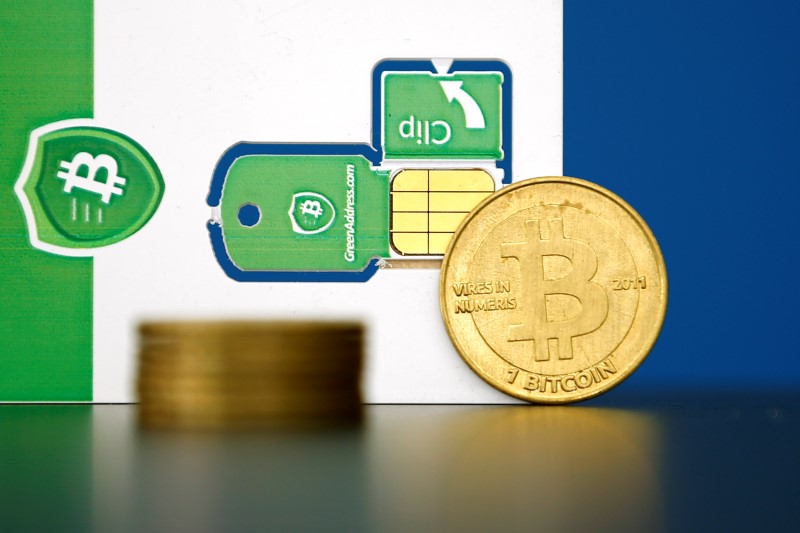 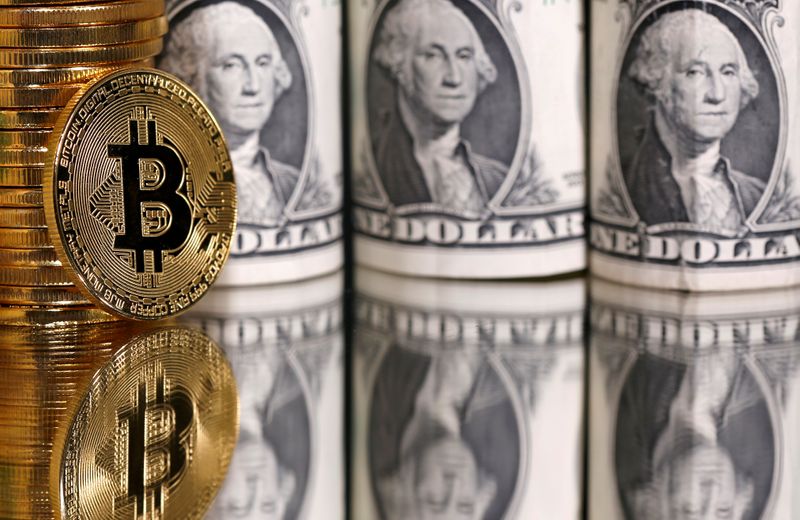 © Reuters. FILE PHOTO: Representations of bitcoin and U.S. dollar banknotes are seen in this illustration

LONDON/NEW YORK (Reuters) – When Elon Musk's Tesla (NASDAQ:) became the biggest name to reveal it had added bitcoin to its coffers last month, many pundits were swift to call a corporate rush towards the booming cryptocurrency.

Yet there's unlikely to be a concerted crypto charge any time soon, say many finance executives and accountants loath to risk balance sheets and reputations on a highly volatile and unpredictable asset that confounds convention.

“When I did my treasury exams, the thing we were told as number one objective is to guarantee security and liquidity of the balance sheet,” said Graham (NYSE:) Robinson, a partner in international tax and treasury at PwC and adviser to the UK's Association for Corporate Treasurers.

“That is the fundamental problem with bitcoin, if those are the objectives for treasurers, then breaking them could get them in trouble.”

Proponents of the cryptocurrency see it as a hedge against inflation at a time of unprecedented government stimulus, a falling dollar and record-low interest rates that make attractive high-yielding assets hard to find.

While the moves have prompted more boardroom discussions though, headaches from bitcoin's volatility to accounting for it and storing it are likely to preclude a big wave of companies holding large amounts on balance sheets in the short term, according to over a dozen financial officers, board members and accountants interviewed by Reuters.

“It will take more than a small handful of disruptive companies investing in bitcoin to impact the narrative in boardrooms,” said Raul Fernandez, an entrepreneur and investor who sits on the audit committee of the board of chipmaker Broadcom (NASDAQ:) Inc as well as other companies.

One problem could lie in the devil of the accounting detail in a bookkeeping industry that, like many others, is still taking stock of the nature of cryptocurrencies.

The Financial Accounting Standards Board, which sets accounting standards for U.S. corporations, does not have guidance specific to the accounting for cryptocurrencies. However, consistent with discussions among a separate U.S. trade body, companies apply existing FASB guidance on the accounting for “intangible assets”, which usually includes intellectual property, brand recognition or goodwill.

Under these rules, companies other than investment firms or broker-dealers cannot book gains in the value of holdings should the price of bitcoin rise – but must write down their investment as an impairment charge if it falls.

Furthermore, once a company writes down its holdings, it cannot record subsequent gains until it sells.

By contrast, companies periodically reflect the impact of fluctuations in traditional currencies in their financial statements.

The FASB has no immediate plans to review its treatment of bitcoin as the issue affects few of its constituents, according to a source familiar with the matter.

“I don't think it's the best accounting so far,” said Robert Hertz, a former FASB chairman. “I am hoping that if more mainstream companies get into bitcoin, the accounting standards board may revisit the accounting treatment.”

Outside the United States, cryptocurrencies are usually treated as intangible assets too. But in contrast to guidance under the FASB rules, writedowns can be reversed in future years. In certain cases, companies can record bitcoin at market value. See EXPLAINER:

Publicly listed companies together hold around $9 billion of bitcoin, data from the Treasuries website shows. Around 80% is held by Tesla and MicroStrategy, the latter with over $4.5 billion.

Square, which allows users to buy and sell bitcoin, said last month it had added an additional $170 million of the virtual coin to its coffers.

Of course, if the price of bitcoin rises, a company can always simply sell its holdings, thus realising some gains. Yet it is still a risky investment, given the cryptocurrency's record of wild swings.

About 5% of chief financial officers (CFOs) and senior finance leaders said they planned to hold bitcoin on their balance sheets in 2021, a survey of 77 executives by U.S. research firm Gartner (NYSE:) found last month.

Some 84% of respondents said they did not plan to ever hold it as a corporate asset, citing volatility as the top concern, followed by board risk aversion, slow adoption as a widespread method of payment and regulatory issues.

“I think for the most part you will find companies will avoid that sort of thing,” said Jack McCullough, president of the CFO Leadership Council and a former CFO.

“CFOs are likely to be very conservative in managing corporate treasuries. They're happy sinking money into very safe places with low interest. Their job is to help grow the company through its operations, and the treasury needs to be safe and secure.”

WHY PUT MY NECK ON THE LINE?

Cryptocurrency supporters, however, say the rationale for companies to buy bitcoin is clear, not least the decline of the dollar – the dominant reserve currency – which has fallen about 4.5% against a basket of major currencies in the past year.

“The value of the dollar over time is getting weaker and weaker,” said Dave Sackett, CFO of ULVAC Technologies Inc, the U.S. subsidiary of a Japanese vacuum equipment maker, and an active cryptocurrency investor.

“Bitcoin flips the script on that.”

Sackett pitched ULVAC executives on investing in bitcoin last April, suggesting they take a chance and then cash out with potential gains. They passed on the opportunity, he said.

Other potential headaches for executives include questions over how a company can safely hold a cryptocurrency, and how much it should disclose to shareholders about security precautions, said Tim Davis, principal in the financial and risk advisory practice at Deloitte & Touche, which advises firms on holding crypto on their balance sheets.

High-profile thefts from exchanges have highlighted problems over safely storing digital assets. The loss of passwords for digital wallets is also a risk. Offline or “cold” storage is widely seen as the best defence against hackers but there are few, if any, regulatory standards.

“Do you custody it yourself?” Davis said. “Do you have an exchange custody it? How much of it do you want to have in a hot wallet versus a cold wallet?”

Ultimately, experts added, the expansion into bitcoin by companies without existing ties to the cryptocurrency market may depend on the willingness of financial executives to take on risk.

“The general consensus among treasurers is that very few of them are going to follow this trend initially,” said Naresh Aggarwal at the UK's Association for Corporate Treasurers.

“As a treasurer, if I am right and the price doubles, the company may sell its holding and make a profit. Whilst the company may be worth more, it won't be reflected in my compensation,” he added.

“But if the price falls, I am pretty confident I will be fired. Why bother putting my neck on the line?”