SEC’s Gensler Will Spur Next Leg Up For Cryptocurrencies; Market Crisis Ahead?

Blockchain technology is changing the global financial system. As the parabolic move in the cryptocurrency asset class continues to take , , and many of the other over 9,430 tokens to new record levels. The threat to traditional currencies and means of payment is rising.

While governments continue to consider how they will regulate digital currency instruments, investments are pouring into the asset class. The market cap has increased to over the $2.3 trillion level, and the prospect is for much higher levels.

Bitcoin and the many other tokens are decentralized currency instruments that threaten the government’s control of the money supply. Since the and are the world’s leading reserve currencies, US and European policy and regulation will be a primary factor for the asset class’s future.

The new US Securities and Exchange Commission’s Chairman, Gary Gensler, will head the agency that decides if and when digital currency ETF and ETN products will appear on the scene. and futures are already trading on the CME futures exchange. The Coinbase (NASDAQ:) IPO has made the exchange a multi-billion platform for trading in crypto instruments.

While cryptocurrencies are becoming more mainstream by the day, the parabolic moves in the market are likely creating concerns. Market bubbles can lead to highly volatile periods and severe corrections when they burst. The larger the boost to the asset class’s market cap, the greater the chances of a correction that could have a systemic impact on markets across all asset classes.

New highs on futures and a pullback

The Coinbase listing sent the prices of Bitcoin, Ethereum, and many other digital currencies to new highs. 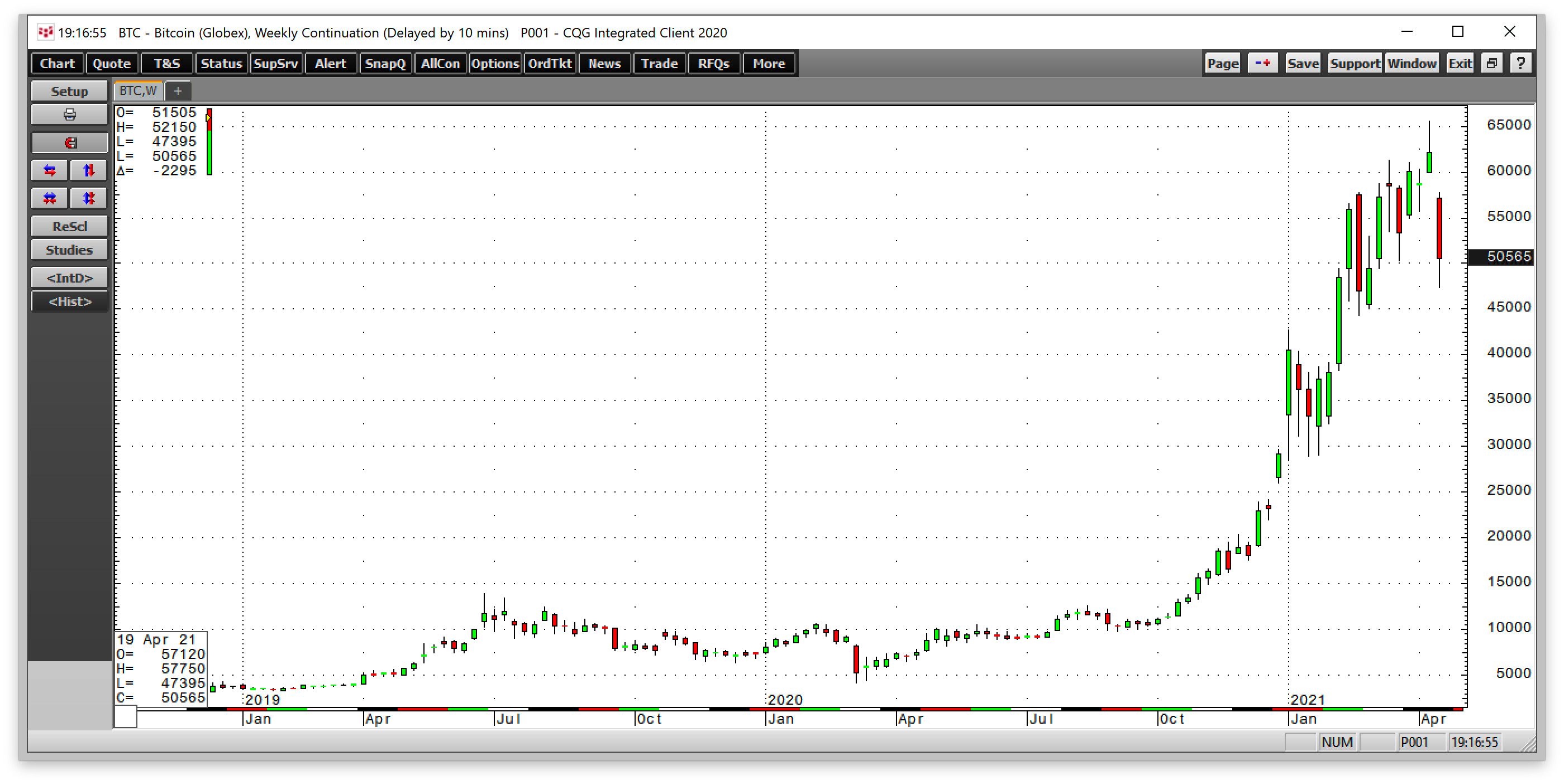 As the weekly chart highlights, Bitcoin reached $65,520 per token on Apr. 14, the day of Coinbase’s listing. The price pulled back to below the $50,600 level at the end of last week. 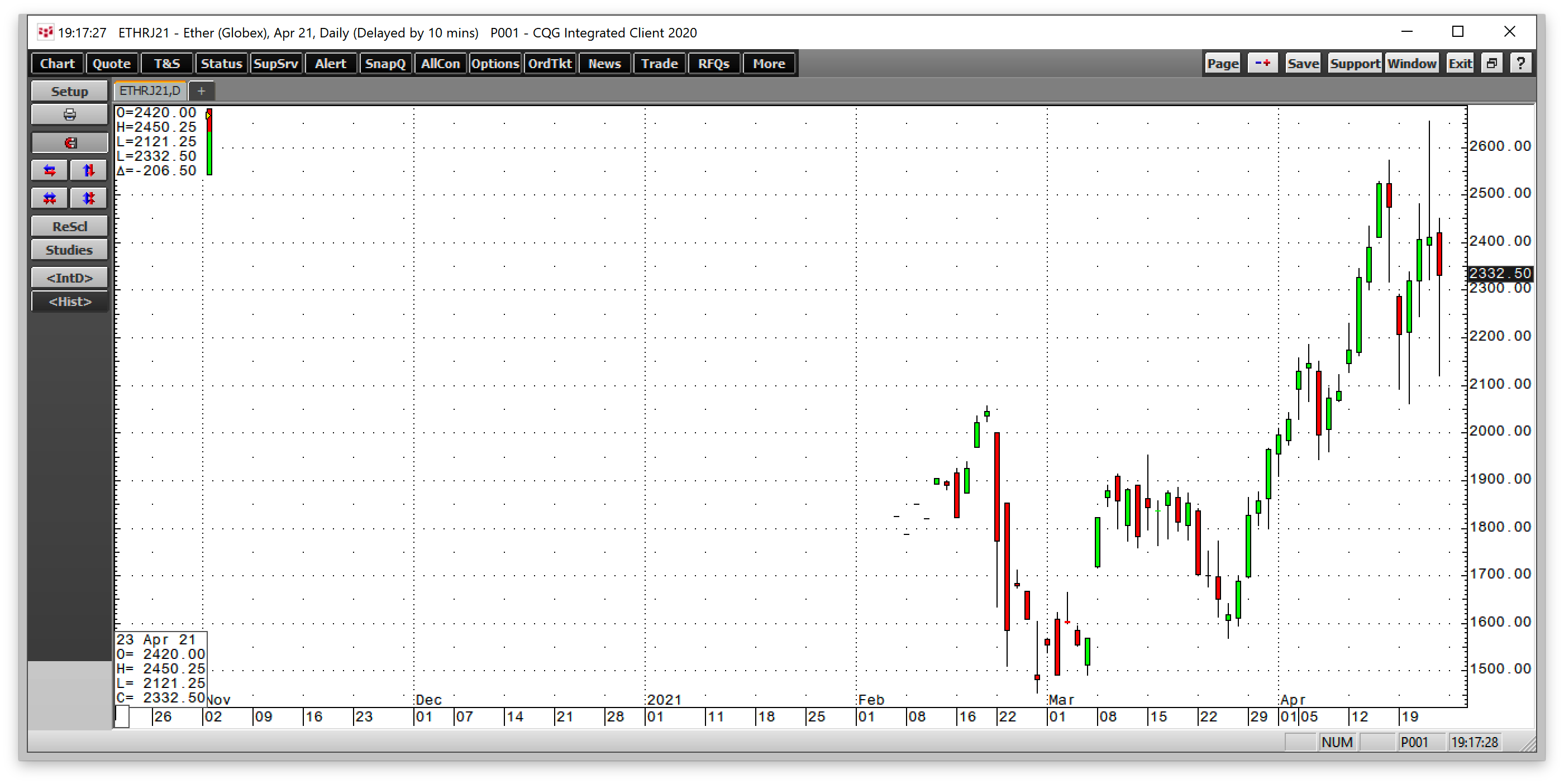 Digital currencies have been making higher highs on each new event that pushes the asset class towards the mainstream. Bitcoin first moved above the $20,000 level in late 2017 when the CME rolled out futures. Square’s (NYSE:) and Tesla’s (NASDAQ:) investments in Bitcoin and acceptance of digital currencies pushed prices to new heights.

The CME’s listing of Ethereum futures on Feb. 8, 2021, did the same. The latest event was the Coinbase listing, which led to higher highs in cryptocurrencies.

After each new high, the market experienced substantial pullbacks.

Higher highs on a pick-and-shovel play: the Coinbase rally

The Coinbase listing establishes a publicly-traded platform for trading and investing. Like the Chicago Mercantile Exchange (CME) and Intercontinental Exchange (ICE) that trade futures and other investment and trading products, COIN opens the door to a home for the burgeoning asset class.

On the first day of trading, COIN’s market cap reached the $100 billion level, which is now an upside technical target for the shares. At that level, COIN had a higher value than either the CME or ICE, which is a testament to the rising value of the cryptocurrency asset class.

Gary Gensler was the former Chairman of the Commodity Futures Trading Commission under the Obama administration. During his Chairmanship, the CFTC designated Bitcoin and cryptos as commodities, paving the way for the first futures market on the CME.

After departing the CFTC, Mr. Gensler taught a fintech class at the Massachusetts Institute of Technology. At MIT, his research and leadership honed his knowledge of the digital currency asset class and blockchain technology.

As a fintech expert, he has now taken over as Chairman at the Securities and Exchange Commission for the Biden administration.

One of Chairman Gensler's first assignments at the SEC is to examine the applications for ETF and ETN products on Bitcoin, Ethereum, and other digital currencies. These products will expand the addressable cryptocurrency market as they will bring trading, investment, and speculation via listed products on stock exchanges.

He will have the opportunity to develop the asset class’s regulatory environment, with far-reaching ramifications for the physical market. ETF and ETN products likely will increase liquidity as market participation grows. Custodial issues, government regulation, and cross-border arrangements for the international instruments will help the markets mature. One of the issues he faces is the libertarian ideology of the asset class that rejects government interference.

At the CFTC, Mr. Gensler was concerned with market abuses and protecting investors and market participants. His approach to the ETF and ETN products will reflect these concerns and should result in robust products.

When it comes to prices, ETF and ETN products will be bullish as more market participants will become comfortable with owning the assets. Nothing sparks interest like a bullish trend.

Bitcoin, Ethereum, and many other tokens have experienced parabolic moves over the past months. Another event that could spur buying may come from the CFTC and its designated contract market, the CME. Micro and mini futures contracts on Bitcoin and Ethereum could open the market to more participants as margin levels would be far lower for smaller contracts.

At $50,565 per token, the current Bitcoin contract has a value of $252,825, with a very high margin level given the high rate of volatility. A contract for a fraction of the five token CME contract would increase liquidity. However, it is ETF and ETN products that would likely do the most to ignite the market as they would open it to many more market participants.

More upside, but blow-off tops could be unprecedented

Bull markets tend to move to levels that most analysts believe are illogical, unreasonable, and irrational. When Bitcoin reached $20,000, some high-profile cynics said the market was a bubble the likes of which had not been seen since the Dutch tulip bulb bubble in the 1600s. Warren Buffett called Bitcoin “probably rat poison squared.” Jamie Dimon, the Chairman of JP Morgan Chase, said the market was a “fraud.”

Given the price action, growing acceptance, and increasing profile of digital assets, these financial luminaries were dead wrong. However, that does not mean we will not see a blow-off top with severe consequences. The price action at the end of last week was a reminder that parabolic moves often end dramatically.

One of the other risks facing the SEC, CFTC, and governments and regulators worldwide is, as acceptance grows, so too do systemic risks of a sudden price collapse. At the $1.879 trillion level, a sudden drop in the asset class’s value would not likely impact markets and the global financial system. However, as it grows over the coming months and years, the risk of systemic damage to the economy will increase.

Systemic risk, circuit breakers, and other regulatory issues face Mr. Gensler as he considers the framework for ETF, ETN, and other derivative products. All of the regulatory agencies in the US, Europe, and other financial hubs worldwide will need to work together to create a marketplace that is safe and robust. Cybersecurity is one of the most significant issues when it comes to custody.

Today, digital currencies could not cause the next financial crisis, but that may not be the case over the coming years as the asset class experiences substantial growth. SEC Chairman Gensler will be thinking about these issues as he reviews the applications for the new products that will likely turbocharge digital currencies to the next set of new highs.