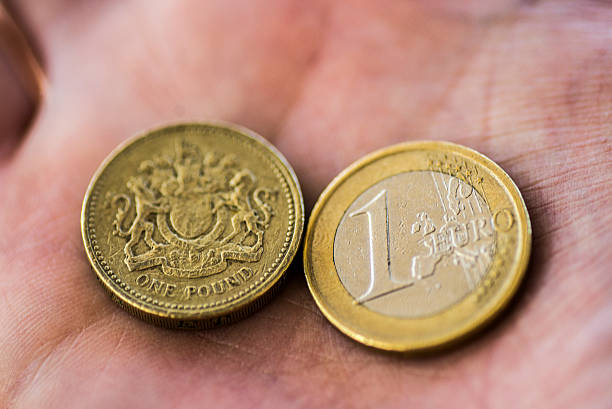 Sterling overtakes Euro as the strongest currency for today, as cross buying against the latter resumes after brief consolidation. However, Swiss Franc is clearly left behind and it’s trading as the worst performing one. Rallies in Gold and Silver are a factor pressuring the safe haven Franc. Yen is following as the second weakest currencies. Dollar and commodity currencies are mixed.

Technically, EUR/CHF surprised us by powering through 1.0849 resistance and it’s now targeting 1.0915 resistance next. While EUR/USD and EUR/JPY are both strong, EUR/GBP is extending the fall from 0.9175. GBP/CHF also accelerates upward today for 1.2259 resistance. Break will resume whole rise from 1.1102. 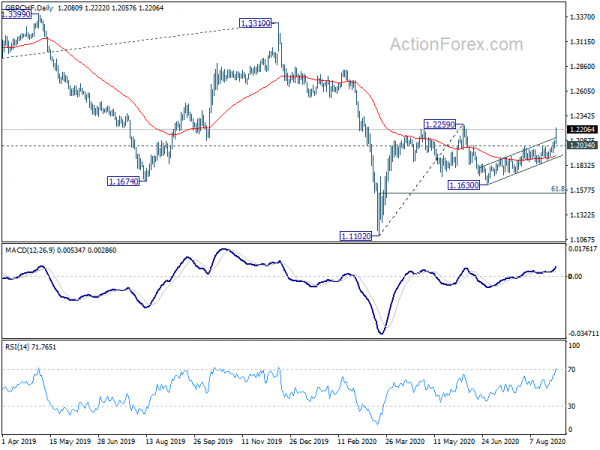 Eurozone PMI Manufacturing was finalized at 51.7 in August, slightly down from July’s 51.8. Markit noted marked gains in output and new orders. Also, confidence was highest for over two years but job losses continued at strong rate. Among the member states, Italy hit 26-month high at 53.1. Germany hit 22-month high at 52.2. But Spain, France and Greece are in contraction.

Chris Williamson, Chief Business Economist at IHS Markit said: “Eurozone factory output rose strongly again in August, providing further encouraging evidence that production will rebound sharply in the third quarter after the collapse seen at the height of the COVID- 19 pandemic in the second quarter. Business expectations for output in a year’s time also rose to the highest for over two years as prospects continued to brighten from the unprecedented gloom seen earlier in 2020.

“Caution is warranted in assessing the likely production trend… Worryingly, order book growth cooled slightly in August, and there are indications that firms are bracing for a near-term weakening of demand… Of note, a key theme of the latest survey is one of firms taking a cautious approach to costs and spending, notably in respect to investment and hiring… “In short, manufacturing is currently being buoyed by a wave of pent up demand, but capacity is being scaled back. The next few months’ data will be all-important in assessing the sustainability of the upturn.”

German Altmaier: At least for now, we’re dealing with a V-shaped development

German Economy Minister Peter Altmaier said that “the recession in the first half of the year turned out to be less severe than we had feared.” “Overall, we can say that at least for now, we are dealing with a V-shaped development,” he added.

UK PMI Manufacturing was finalized at 55.2 in August, up from July’s 53.3. That’s also the highest level in 30 months. Markit noted output and new orders rose at solid and accelerated rates. Input price inflation was also at 20-month high.

Rob Dobson, Director at IHS Markit: “The recovery of the UK manufacturing sector gathered pace in August. Output expanded at the fastest rate in over six years as new work intakes rose to the greatest extent since November 2017, led by an upturn in domestic demand and signs of recovering exports. Business optimism also remained encouragingly robust and close to July’s recent peak.

“However, companies report that the current bounce is mainly driven by the restarting of manufacturers’ operations and reopening of clients as COVID-19 restrictions continue to be relaxed. Backlogs of work fell at an increased rate, hinting at spare capacity, and the labour market remains worryingly weak, with job losses registered for the seventh straight month. The downturn in employment may have further to run as the government’s furlough scheme is phased out unless demand rises sharply.

“Given the fragility of demand and uncertain outlook, both in terms of COVID-19 and Brexit, policymakers may struggle to prevent a ‘surge-then-slump’ scenario from developing.”

RBA left cash rate unchanged at 0.25% as widely expected. The target for 3-year AGS was also kept at 0.25%. On the other hand, it decided to increase the size of the Term Funding Facility to around AUD 200B. Also, the access to facility will also be extended. It also pledged to maintain “highly accommodative settings as long as is required”. It “will not increase the cash rate target until progress is being made towards full employment and it is confident that inflation will be sustainably within the 2–3 per cent target band.”

On the economy, RBA reiterated that the downside is “not as severe as earlier expected”. But recovery is “both uneven and bumpy” with outbreak in Victoria having a “major effect” of the state’s economy. Unemployment and underemployment “remain high” and it’s “likely to be some months” before a meaningful recovery in labor market takes place. Wages and price prices pressures also “remain subdued” and “likely to continue for some time”.

RBA also acknowledged that “US dollar has depreciated against most currencies over recent months. Given this and higher commodity prices, the Australian dollar has appreciated, to be around its highest level in nearly two years.”

Australia AiG manufacturing dropped to 49.3, Victoria in contraction too

There was large divergence between larger manufacturing states. Victoria’s PMI dropped by -9.3pts and back into contraction at 44.0. New South Wales PMI also dropped -5.2 pts to 51.0. But South Australia PMI Rose 3.3 pts to 65.3. Queensland PMI also rose 9.7 to 47.1.

Japan capital spending dropped -11.3% in Q2, unemployment rate ticked up to 2.9% in Jul

Japan’s capital spending dropped -11.3% in Q2, much worse than expectation of -4.0%. That’s also the worst decline since Q1 2010, as coronavirus pandemic hit manufacturing and services investments.

PMI Manufacturing was finalized at 47.2 in August, up from July’s 45.2. Markit noted slowest falls in output and new orders since early 2020. Export sales also decline at weakest rate for seven months. There is modest drop in employment.

Annabel Fiddes, Economics Associate Director at IHS Markit, said: “The latest PMI data show that Japan’s manufacturing sector moved closer to stabilisation in August, as firms signalled weaker drops in output and orders… It is hoped that as economies around the world reopen and business operations normalise, this will feed through to firmer customer demand and a recovery of Japanese manufacturing activity in the months ahead.”

China Caixin PMI Manufacturing rose to 53.1 in August, up fro m52.8, above expectation of 51.3. Markit noted the sharpest increases in output and new orders since the start of 0211. New export work rises for the first time in 2020 to date. Employment also moves closer to stabilization.

Wang Zhe, Senior Economist at Caixin Insight Group said: “Overall, the post-epidemic economic recovery in the manufacturing sector continued. Supply and demand expanded with the pickup in overseas demand. Backlogs of work continued to increase. Both quantity of purchases and stocks of purchased items also grew. Companies’ future output expectations remained strong, reflecting a positive outlook for the manufacturing sector for the year ahead.

“Employment remained an important focus. An expansion of employment relies on long-term improvement in the economy. Macroeconomic policy supports are essential, especially when there are still many uncertainties in domestic and overseas economies. Relevant policies should not be significantly tightened.”

EUR/CHF’s rise from 1.0602 resumes through 1.0849 resistance and hits as high as 1.0876 so far. Intraday bias is back on the upside for 1.0915 resistance first. Firm break there will resume the rally from 1.0503 to 1.1059 cluster resistance. On the downside, break of 1.0721 support is needed to confirm completion of the rally. Otherwise, outlook will stay cautiously bullish in case of retreat. 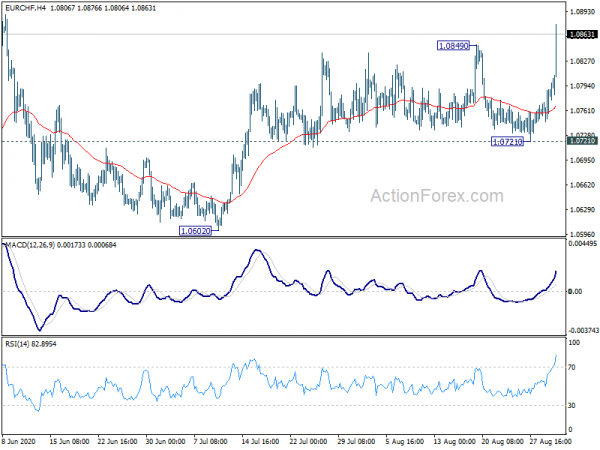 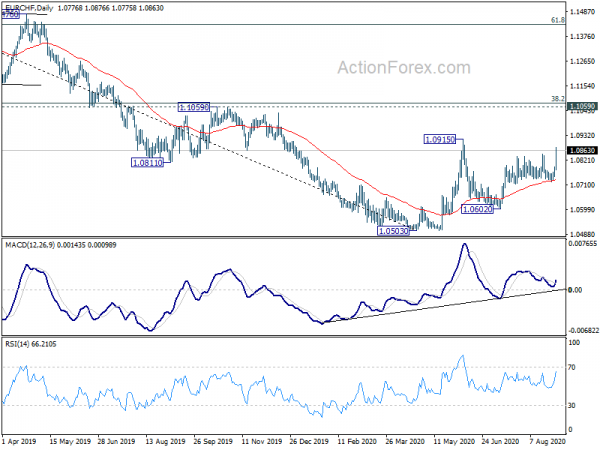