is winning. Period. In fact, it may have already won and the people arrayed against it, no matter how powerful, are finally beginning to realize this.

This week saw a slew of major announcements which all point in this direction.

Of course the big news was Elon Musk’s announcement of Tesla (NASDAQ:). having a $1.5 billion position in bitcoin.

But that news came on the heels of a lot of other news, like VISA saying it was ready to embrace bitcoin to help banks build crypto-payment and trading services.

VISA-backed debit cards have been around for a while now, like BitPay’s offering, but this announcement by VISA is different as it highlights the the futility of fighting the market when the market chooses something better.

And speaking of BitPay the most important announcement of the week, in my opinion, is Apple's (NASDAQ:) allowing BitPay’s Mastercard (NYSE:) to be added to ApplePay wallets. Google (NASDAQ:) and Samsung (KS:) are next.

Later in the week MasterCard followed VISA now saying it will allow a handful of cryptocurrencies to flow across its network.

Lest I forget that no less than three major pillars of the banking community gave up fighting the bitcoin wave.

But still there is no ‘use-case’ in the words of perma-skeptics like the venerable Peter Schiff who is becoming increasingly desperate to make his case while trashing his bona fides as an Austrian-style economic thinker. 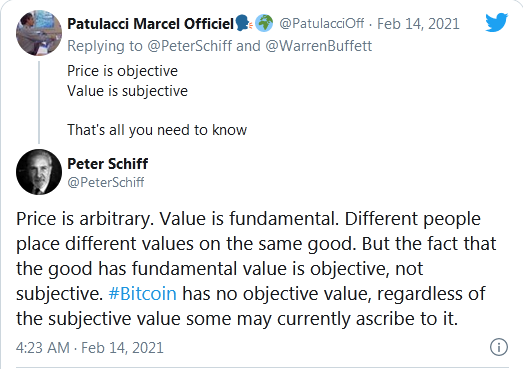 This tweet proves what I said about Schiff last fall.

To deny that Bitcoin has any value is to deny the fact that information is a commodity. And that’s truly facile when, at its essence, that’s all an economy actually is, information. The goods that move can only do so efficiently with good information about their production and distribution.

Price is the value of the information being transacted.

Peter Schiff makes his living getting paid to dispense opinions on markets. His entire life is built on the idea that information concentrated in one man’s mind is worth something to someone else who is ignorant of that information.

That people like Peter Schiff deny this simple process by which something acquires and builds commodity value through time is also irrelevant.

It means that while Peter studied Austrian economics he just didn’t understand it. 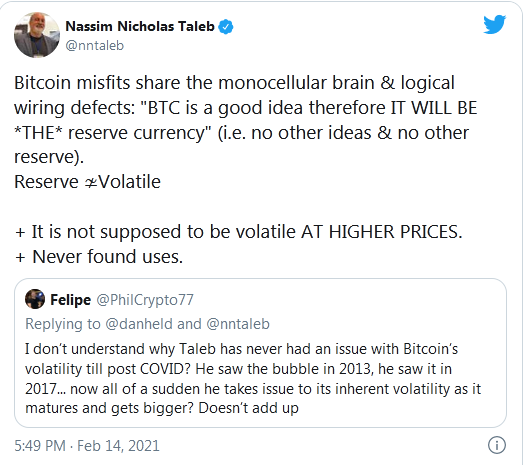 It must be the hypoxia. It eventually rewires everything. Because Mr. Antifragile himself continues to miss the reasons why humans desire antifragility and expects that to occur on his time schedule not theirs.

So, he falls back on insults defended by dubiously-applicable math rather than admit to the paradigm shift happening in front of his eyes.

Bitcoin’s volatility isn’t as much a bug in its design but a feature of its adoption curve.

Because in any appreciable sense when viewed against other major assets as a function of its price moves, Bitcoin isn’t really all that volatile.

Bitcoin’s price is volatile, certainly. More volatile than any of the other assets here when comparing the weekly range from low to high versus the standard deviation of that range… call it internal volatility.

But that volatility is a function of it being in a bull market, operating in far less mature trading platforms than these other assets and about twenty other variables that do not apply to Apple, , or the , making any statistical comparison between them, frankly, puerile.

Mr. Taleb should know comparing statistical data from sets with different boundary conditions is the height of intellectual weak sauce.

And yet, given those caveats, on a week-to-week basis, trading 24/7 without arbitrary halts like the others, bitcoin measured against itself is only slightly more volatile than any of these other assets with higher internal volatility.

It’s an asset rapidly expanding its userbase, it’s acquiring monetary character daily as more of the old monetary system sees the opportunity to make a vig, in VISA and Mastercard’s case, or provide explosive returns for investors looking to hedge against the chaos of a ruling class gone equal parts crazy and moronic.

It’s a growth stock that is just finding the sweet spot of its growth curve as conditions for its value proposition increases daily.

Which brings me to the following observation:

If you are an asset manager today and you saw the brazen display of incompetence, pettiness and cluelessness in Congress and the Senate…

If you are an asset manager today who sees the draconian and willful destruction of the U.K. economy by a Prime Minister who should literally be dragged out of 10 Downing St. by his hair and thrown into the Thames…

If you are an asset manager today and see the ruthless political shenanigans perpetrated on the major economies of Germany, France, Italy and Spain…

… and you aren’t buying the living shit out of bitcoin right now, you should lose all your business!

What argument can you make to pile up more dollar-denominated assets in your client’s portfolios in a world literally drowning in dollars and dollar liabilities, knowing the policy responses will be to create more dollars, undermine the confidence of the system and accelerate a fundamental shift in the monetary system?

Are you really that enamored by Christine Lagarde at the ECB? Jerome Powell at the Fed? Kuroda at the BoJ?

Are these the best and brightest the world has to offer us for stewardship of our future as a species?

Or are you finally willing to listen to what your clients are telling you and now have to pile in to save face?

Most of you have already missed the greatest wealth transfer from the rich to the middle class in history but, hey, past results don’t guarantee future returns, right?

The point is that bitcoin, and cryptocurrencies in general, are still assets in their infancy. But as technology anyone with an ounce of intellectual honesty can tell you where this is all headed.

And this week’s mass of announcements is the dam breaking down of adoption. It’s the clearest signal yet that the overreach and arrogance of the political class has reached its limit of power.

We don’t buy it anymore. And the whole system is now accelerating towards a catastrophic crisis of confidence.

Making arguments about historical volatility or intrinsic versus extrinsic value is, at best sophistry, and, at worst, egoism.

We’re reaching the inflection point that I’ve talked about before. It is the moment when a critical mass of people stop valuing their portfolios in terms of dollars but in terms of bitcoin.

Years ago, before bitcoin, when I was an advocate for the Liberty Dollar, I used to go everywhere with two one-ounce silver rounds in my pocket. And when I walked into a place where I could spend money I would reach in and hold them in my hand for a minute.

I asked myself one simple question each time, “Would I spend these coins to buy that thing.” And more often than not the answer was, “No.”

It was a great exercise in teaching myself fiscal restraint. Today people are doing the same thing with bitcoin. They’ll spend their dollars or but they are HOLDing their bitcoin because they KNOW it’s more valuable to them than those dollars or euros. 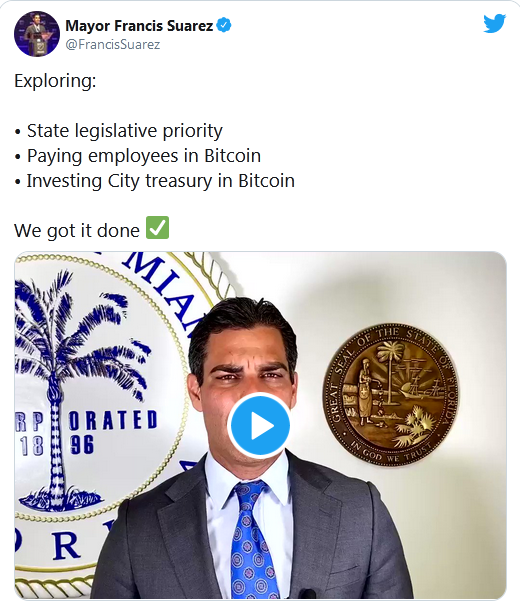 Christine Lagarde called bitcoin, “Funny business money,” in her latest attempt at both wit and to warn us what her plans were. It failed to impress us on both fronts.

Because Lagarde, like Schiff and Taleb, believe they know what real money is. They think because they have the power (Lagarde) or the pulpit (Schiff and Taleb) that they can define for the market what money is or what it will be in the future.

These aren’t dumb people, but they are being dumb here. Because, at least for Taleb and Schiff they are supposed to know that the market is bigger than any one person or group of people.

Lagarde will learn this lesson in the hardest way imaginable.

Bitcoin will rise to some new, seemingly astronomical high that will be “unthinkable.” Eventually, sentiment will get so out of whack and supply will balance demand.

That will set off a correction of major proportions, think 50-60%, maybe more.

That’s fine. Been there, done that, got the alt-coins to prove it.

And I’ll do what I’ve been doing for four years now, calling them losers.

An Honest Reflection By DailyCoin

An Honest Reflection By DailyCoin