Tesla Sends Bitcoin To The Moon

Over the weekend, once again reminded crypto market participants of the likely continuation of its growth. The coin was able to overcome the important round level of $40K, but as it approached $41K, sellers' pressure intensified. 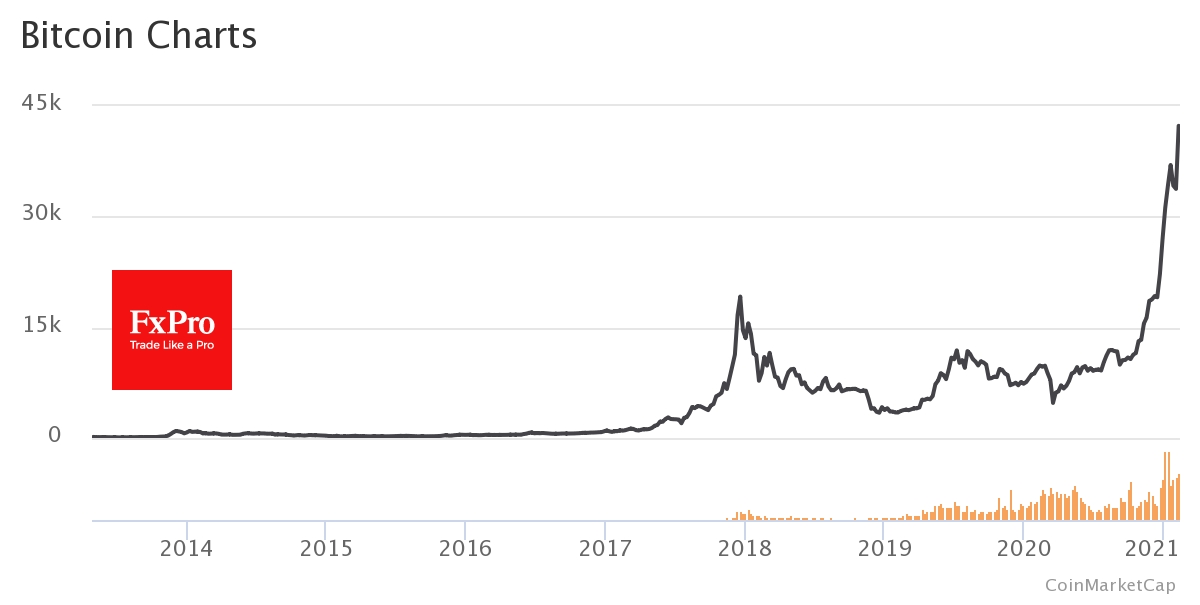 For some time, the bulls and bears have been playing tug-of-war around this round level, but eventually, both sides decided to take a break while waiting for more triggers.

And then the trigger came. Tesla (NASDAQ: suddenly announced that it had previously bought $1.5 billion worth of bitcoins, pushing the price to update historical highs of $43K. Even more optimistic is the announcement that the company will consider accepting bitcoin as payment.

The total capitalization of the crypto market now exceeds $1.25 trillion. Although Bitcoin's dominance index fell dramatically by almost 9% during the month, market participants consider this great news, as it indicates a high interest in altcoins amid the overall capitalization growth. Indeed, most of the top 100 coins are now in the green zone. 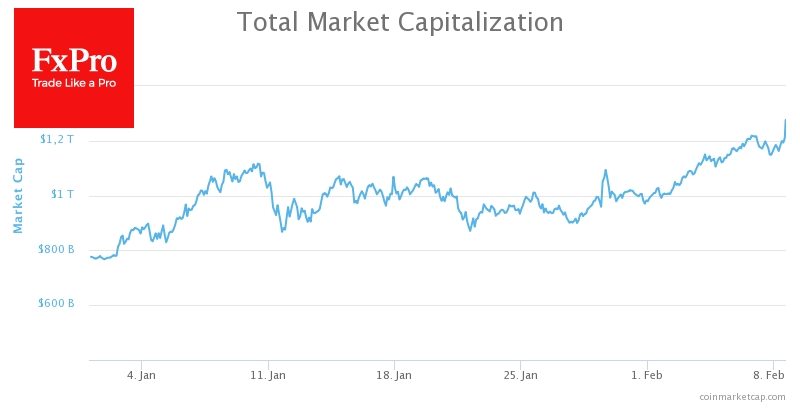 he total capitalization of the crypto market now exceeds $1.25 trillion

The current phase in the crypto market can be compared to periods in stock markets when small-capitalization companies overtake giants in growth rates. Such periods occur well before the end of strong growth.

Bitcoin's new growth outbreak is related to the speculation that more companies may follow Tesla's lead, kicking off an accelerated widespread adoption of cryptocurrency as a means of payment. Positive moves in this direction have led to growth in the crypto market before, but at this stage, the correlation between the traditional market and cryptocurrencies may be particularly strong.

The recent growth in the price of , which was able to break its all-time high and consolidate around $1,600, led to an increase in online commissions to $25. Miners' revenues have risen on the back of increased demand, and they are also the first to execute those transactions for which there is a higher fee.

This again led to one of the fundamental problems in the Ethereum blockchain, when the cost of transactions in the ETH ecosystem became exorbitant. At this time, crypto market participants are starting to turn their attention to competitors, including , and . In addition, ETH futures are set to launch today on the CME. The event is highly anticipated, as, in the past, the launch of Bitcoin futures led to a sell-off.

DeFi summer 2.0? ‘Gen 2’ tokens on a tear amid wider market slump By Cointelegraph