The Central Bankers Are Coming … For Your Bitcoin

One of the oldest arguments against , and cryptocurrencies in general, is the Central Banker Attack. Anyone who’s spent more than fifteen minutes inside the crypto-world will have heard this one.

That’s the argument where the person tacitly admits Bitcoin isn’t a scam or vaporware but then says, “Well, if it gets too big, they’ll just make it illegal.” What’s most baffling to me is that this argument is mostly made by those who swear by their holdings while simultaneously swearing at the central bankers for ruining the world.

I get that it’s mostly a coping mechanism for watching crypto go ballistic while gold languishes under the control those same central bankers. And, in the past, I had a lot more sympathy for that perspective than I do now. Because today, at a total valuation around $2 trillion, we’ve arrived at that moment where the bankers and politicians are coming for Bitcoin and cryptocurrencies and they are coming hard.

Since last week’s Coinbase (NASDAQ:) IPO, Bitcoin has been under constant and persistent attack. Bitcoin pushed through its former peak at $61,800 and since then there have been massive, coordinated dumps to push the price back down. 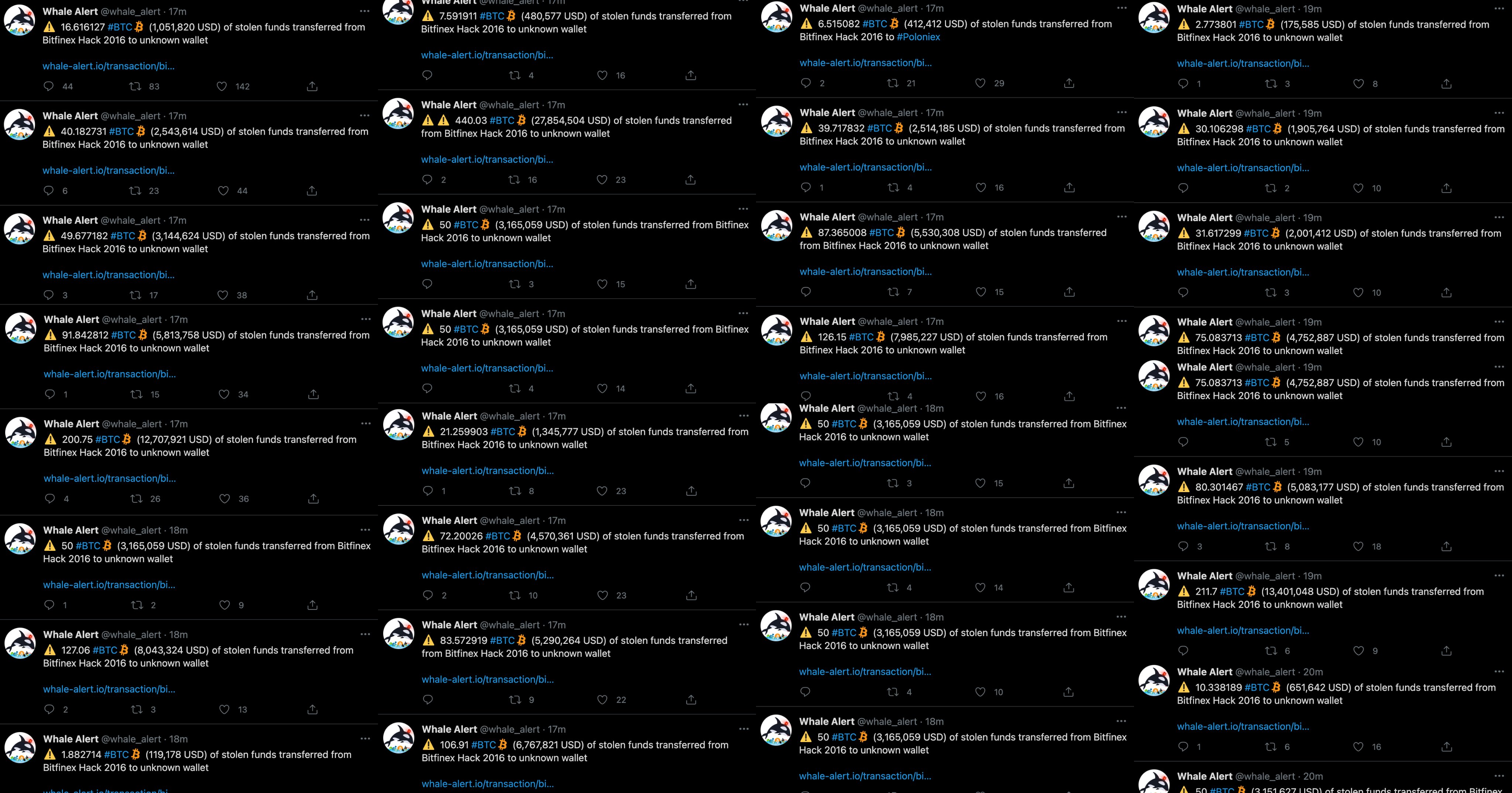 That pushed Bitcoin back below it’s previous high and COIN’s tumble from an overpriced IPO didn’t help matters.

Then Turkey announced on Friday it would, like India, ban the use of cryptocurrencies as payments.

At nearly the same time, however, China announced it was allowing Chinese banks to import up to 150 tonnes of gold for retail distribution for the first time since 2019. This led some to speculate about a ‘gold-backed ’ but I don’t think that at all.

This was simply another counter-move to the ones made against the cryptocurrency markets. Like the Archegos Capital tac nuke that is still creating aftershocks throughout the financial system, China’s announcement sent gold, which was firming but still very vulnerable to the downside, through near-term resistance to close the week above the magic $1760 level. 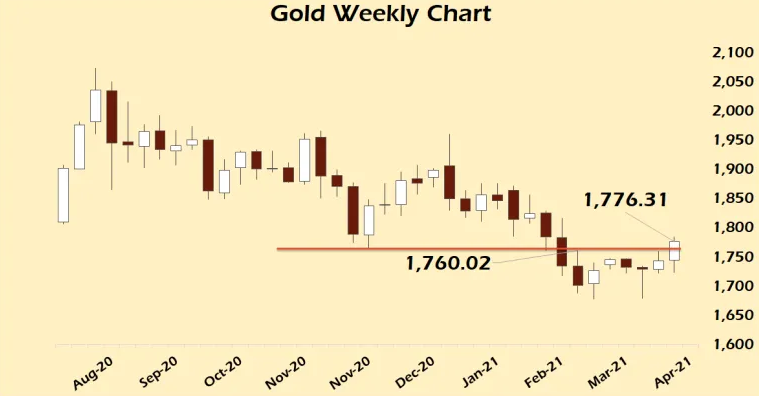 So, when casting your eye around the market landscape who are the people, other than the bitter gold-only bugs, most bearish about Bitcoin and cryptocurrencies? The ones who made/make their living off the U.S. dollar-based system.

Between them and those that have a kind of monetary policy Stockholm Syndrome there’s still a massive number of people who just can’t or won’t get involved at this point. At a minimum, many pros are simply waiting for a real correction they can get behind to finally take the plunge.

But bull markets, real bull markets, are brutal to people who refuse to get on board and the longer it goes on the more strident in their opposition they become. Hence the constant sniping and backbiting by people who should know better amplifying the truly clueless takes on the situation.

Thanks to the Chinese on Friday a simultaneous wipeout of both gold and Bitcoin was avoided with gold breaking out and Bitcoin mostly holding serve, throwing no technically significant bearish signals into the weekly close. 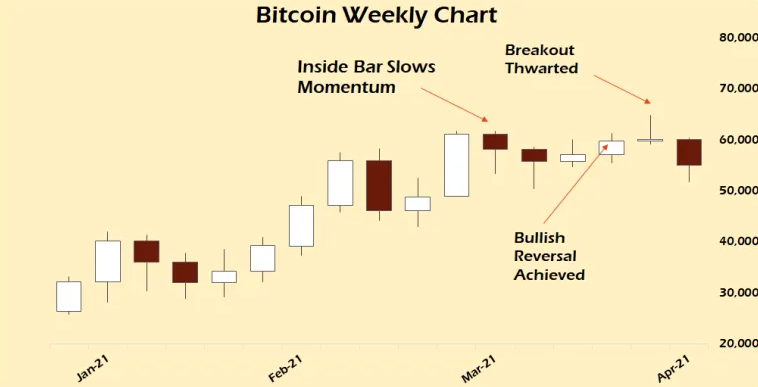 Averting a weekly close above the March high helped set up what happened on Sunday early morning.

These attacks were honestly not terribly successful until a series of uncorroborated rumors of the SEC going after Bitcoin account holders for money laundering emerged on Twitter this weekend.

From Zerohedge on this:

Whereas this account traditionally blasts Reuters or Bloomberg headlines, in this case there was no such underlying report from either Reuters or Bloomberg, and Bloomberg even said that “several online reports attributed the plunge to speculation the U.S. Treasury may crack down on money laundering that’s carried out through digital assets.”

Furthermore, in comments just earlier this week, regulators refused to take a position on Bitcoin either way, even as speculation of a crackdown against Bitcoin by the US government is ever present – indeed, the rumor of a “crackdown” against money laundering has always been present, which is why said tweet merely poured gasoline on an already jittery market.

Then there were the blackouts in China which took a huge amount of hashing power offline for a few hours this weekend. 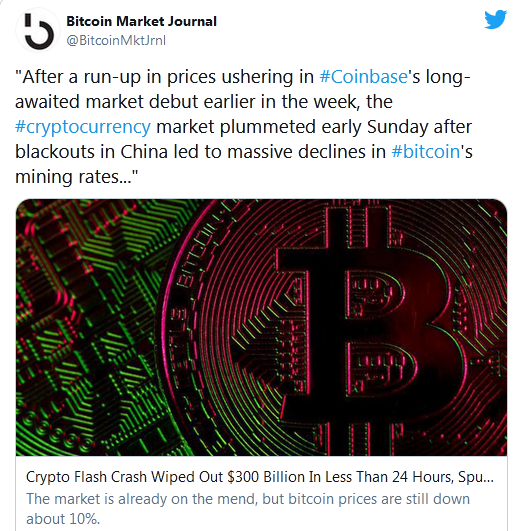 But, honestly, this kind of bearish price action into Sunday morning is normal. I do a report for my Patrons every Sunday morning and there is always shenanigans while I’m asleep Saturday night. I go to sleep and everything is fine and I wake up the next morning and Bitcoin is off some amount. Sometimes it’s technically scary, like this week and sometimes it’s just sad.

Now, Zerohedge is right that the market should be jittery, certainly. Any asset that climbs 20x in a year is one that is very overbought. However, Bitcoin’s unique problem for mean reversionists is it is just beginning to climb the broader adoption curve while it’s supply continues dwindling.

And that’s why these attacks had to happen this week. Another bull wave up would have done real damage to the credibility of the central banks right at the same time that China seemingly put in the floor beneath gold prices at around $1670.

Remember, it was last year where gold and Bitcoin came off the Coronapocalypse in safe haven lockstep, both rallying hard into August. Bitcoin’s fundamental supply and demand mismatch and a spate of institutional adoption announcements touched off its rise in November to break out of the three-year consolidation at the quarterly level. 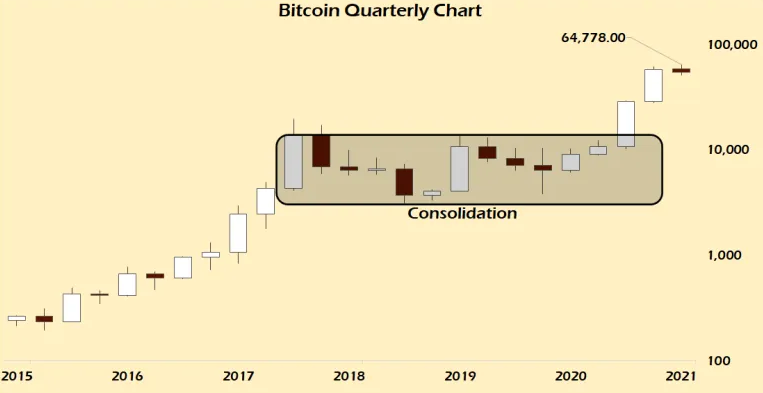 Gold, still being the plaything of the central banks continued its decline to this day. Even Friday’s technical breakout is only a short-term life preserver given that the longer-term charts are bearish. Gold has a lot of work to do to regain the market’s confidence.

And that makes Bitcoin’s correction all that much more dangerous all around because the two assets moving down together now will only make those skeptical of Bitcoin that much more cautious and respectful of the awesome power of the central banks.

The liquidations in Bitcoin that began over the weekend continue today. The usual suspects will be out saying, “See! I told you so!” And I’m looking at my portfolio saying, “Told me what, that I’m only up 350% since the start of the year versus 400%?”

Cry me a frickin’ river.

Moments like this quite possibly become inflection points in a market’s history, no doubt about it. And it’s clear that there is a coordinated effort by those with power to manipulate events to their satisfaction. It’s completely expected. If they didn’t counterattack I would actually be less bullish on cryptos because I’d now be looking for the dead rat in the cupboard because something wouldn’t smell right.

That said, China confirmed my analysis of their Friday announcement on gold by today reversing their stance on cryptocurrencies after years of opposition to it.

Industry insiders called the comments “progressive” and are watching closely for any regulatory changes made by the People’s Bank of China.

“We regard Bitcoin and stablecoin as crypto assets … These are investment alternatives,” Li Bo, deputy governor of the PBOC, said on Sunday during a panel hosted by CNBC at the Boao Forum for Asia.

“They are not currency per se. And so the main role we see for crypto assets going forward, the main role is investment alternative” he added.

This confuses some people, but it honestly shouldn’t.

I’ve made the point in the past that if you really thought China was against Bitcoin then how do you explain the amount of energy consumed by the Chinese electrical grid in mining it? 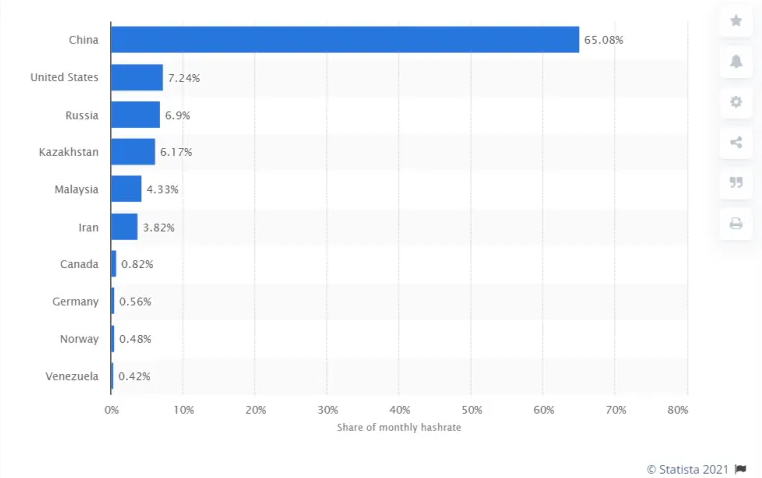 I’m no fan of central planning but really do you think something like this happens without the CCP knowing about it because they have a Hayekian pretense to knowledge? Or do you think, maybe, just maybe, China is more than happy to allow this to go on knowing the bind it ultimately puts the Fed, the ECB and the SNB?

Do you really think that China doesn’t understand that Bitcoin and other cryptocurrencies can become more of a near-term threat to the U.S.’s dominance of the global financial system than anything it does today or tomorrow with the digital yuan?

Even if that argument doesn’t persuade you, the idea that China wouldn’t nurture Bitcoin as a weapon to use against an increasingly hostile and sanctions-happy U.S. as a kind of monetary shock troop brigade is terminally naïve.

Moreover, do you think China’s government didn’t just give out a stern warning to the miners there not to get too many ideas? If Jack Ma can get taken down a few pegs, so can AntPool. Moments like this only confirm for me that the Bitcoin hashing power will become more democratized now that there are real investments in the U.S. on the line.

Expect hashing power to migrate away from China while at the same time more attempts made to bring the Bitcoin supply more under control of authorities here in the West. The beauty of crypto, of course, is that spinning up another blockchain is easy, building trust over time is important and altcoins which one may consider shitcoins today may be the saviors of the entire industry tomorrow.

Highs are made when the supply of buyers is overwhelmed by the supply of sellers. Bottoms are the reverse of this, where sellers are overwhelmed by a flood of buyers. I find it fascinating that this knock down of Bitcoin hasn’t done much to dampen the enthusiasm for other high-quality store-of-value style coins. Once Bitcoin retreated from its new high we saw big breakouts in coins like , (XMR), (DCR) and (BCH).

Heck, even a duds like (ZEC) and (BTG) joined the parry.

But once Turkey made its announcement and the SEC rumor hit the markets what really saw a move was the ultimate privacy coin, Pirate Chain (ARRR). It doesn’t take a 200+ IQ to figure that one out. Pirate Chain has been quietly building momentum all year and exploded in a 10x move that made even (DOGE) look tame. Moreover, there seems to be no slowing it down, because this isn’t a trade, it’s a defensive move.

Since ARRR doesn’t really trade on any major exchanges liquidity is non-existent and holders of it have no intention of letting go just because the central banks are coming. If the SEC is worried about money laundering with a fully transparent blockchain like Bitcoin or ethereum, what will they do when the world wakes up to the complete anonymization of capital coins like ARRR and XMR are capable of delivering?

With the central banks and The Davos Crowd making their moves on the entire crypto-space it validates what I’ve been saying about the futility of their actions trying to maintain their power and control. They are putting a premium on anonymity and privacy in a world increasingly under surveillance. China’s statements and actions on Bitcoin are putting a premium on wider, shallower mining and alternatives to blockchain security.

It may be time to light three lanterns in the window because the central banks are coming both by land and by sea but nothing worth having was ever gained by not fighting for it. We’ll soon find out who has the stones and the fortitude to stick it out to the end.

And if the crypto-revolution ultimately dies on the digital vine then there’s always gold right?