The total capitalization of the crypto market has stopped at around $1.5 trillion, and investors are braced for the new triggers. At the moment, the prospects are quite ambiguous, as surrendered important price levels and failed to return to them quickly.

The total capitalization of the crypto market has stopped at around $1.5T

During the day, the coin also broke through an important support level at $35K, but so far, buyers have had enough strength to bring BTC back higher. A long tug of war not for $40K but already for $35K may result in bears gaining the upper hand and start pushing the coin below $30K.

The Crypto Fear & Greed Index fell to 10 over the weekend and rose to 18 today, remaining in “extreme fear” mode. In this mode, we may get a consistent and very prolonged decline. The RSI index for the pair on the daily chart fluctuates near the oversold territory, signalling that there is room for growth. 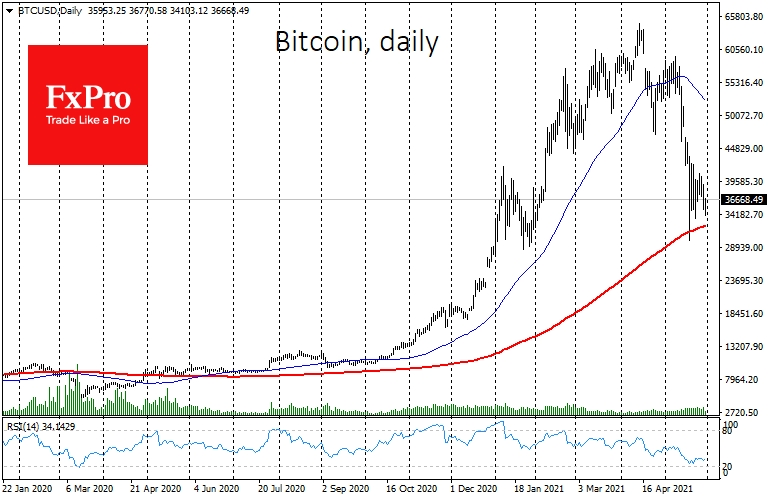 The RSI index for the BTCUSD pair on the daily chart fluctuates near the oversold territory,

Regulatory risks remain among the clear deterrents. While the ECB and the Fed are not being overtly negative on Bitcoin at the moment, we can still see how much the race to create national digital currencies is accelerating. The ECB recently issued a report ruling that cryptocurrencies pose “limited risks” to the financial stability of the system at this stage. It's all about the volume of transactions, which at this stage is not much of a concern for regulators.

In their actions, they are guided by simple principles. The real threat to the monetary monopoly was posed by projects with global reach from Facebook (NASDAQ:) and Telegram. In both cases, we saw that in case of urgent need, the authorities of the countries act lightning-fast and in a very coordinated manner.

At the very least, this can be considered good news: while central banks are developing their own national cryptocurrencies, the classic crypto market will be allowed to exist, as long as it does not exceed the regulators' comfort levels. These levels vary widely from country to country. As it turns out, they are too big for Chinese regulators and a number of smaller countries, while they are still too small for EU and U.S. regulators.