The election is being fought on social media amid the pandemic 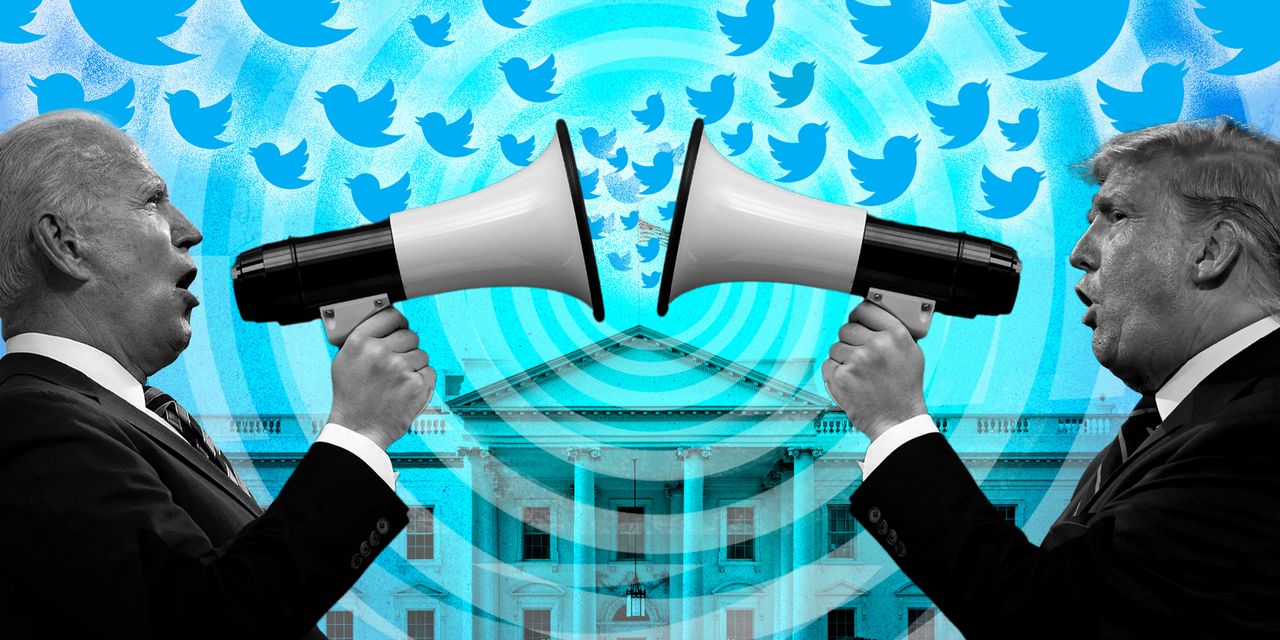 The day after a widely panned debate performance in late September, President Donald Trump turned to a tried-and-true strategy: Scathing ads on Facebook Inc.’s social-media platform stoking false claims about immigrants that were quickly taken down.

Eight days later, during the vice presidential debate, a wayward fly landed on the head of Vice President Mike Pence, prompting the Biden-Harris campaign to make light of it with a $10 blue fly swatter inscribed “Truth Over Flies” on the handle and Biden-Harris 2020 logo. The fly swatter quickly sold out, with sales going to the campaign.

Such are the contrasting uses of social media between the two major parties as the election nears. While conservatives have generally turned to Facebook Inc.
FB,

to push their talking points and organize the masses through highly sophisticated statewide operations in swing states, liberals have used a lighter touch while microtargeting supporters to raise money and gather data on voters.

Trump’s ads on Facebook eviscerated his opponent, former Vice President Joe Biden, with misleading and inaccurate claims about COVID-19 and immigration. Facebook quickly removed the 216 ads that claimed “despite the health risks [of] COVID-19 Joe Biden will increase refugees” from Somalia, Syria and Yemen.

Donald J. Trump for President Inc. paid $10,000 to $15,000 for the 15-second video messages that started to run Sept. 30, according to the Facebook ad library for the Donald J. Trump Facebook page, which lists ads purchased by the Trump campaign.

Don’t miss: Here’s where Biden and Trump stand on antitrust, social media and other tech issues

“We rejected these ads because we don’t allow claims that people’s physical safety, health, or survival is threatened by people on the basis of their national origin or immigration status,” a Facebook spokesman told MarketWatch.

At the same time, Trump’s campaign also published dozens of ads on Facebook and Instagram featuring doctored images showing Biden wearing earbuds with a bar of text asking, “Who’s in Joe’s ear?” Those ads, too, were removed by Facebook, which also owns Instagram.

Social media is part of the blueprint for Trump’s re-election push, after the platforms helped him win election in 2016. The president has used his massive followings on Twitter (87.2 million) and Facebook (31.9 million) to amplify his views and fire up his base, but the platforms have removed or censored some of his posts they deemed misleading or inaccurate.

“The campaigns operate on social media just as you would think,” PJ Howland, vice president of industry insights at digital marketing agency 97th Floor, told MarketWatch. He looked at both, and in the “2020 Election Marketing Report,” concluded “Trump is grandiose while Biden is tactical and focused on the issues.”

While Biden favors togetherness and issues, Trump is about branding the Trump name and raising funds through merchandising, according to Howland, who said Trump outspent Biden on Google
GOOGL,

ads from June through August by $42.1 million to $27.8 million. Biden is pursuing state markets, while Trump has opted for a national push – which seems to counter conventional thinking and the approach that helped Trump win in 2016.

The coronavirus pandemic has forced most campaign events to go virtual this year, but social media was always going to be a large part of the election approach.

Read more: Zoom could play an outsize role in campaign with Trump sidelined by COVID-19

“The left likes to think it owns the internet, but conservatives are much stronger on social media,” sociologist Jen Schradie, author of “The Revolution That Wasn’t: How Digital Activism Favors Conservatives,” told MarketWatch.

“Remember, the Tea Party had already started a movement online, and Trump captured it and took advantage of it,” says Schradie, who points to Sister Toldjah, a conservative activist in North Carolina, as a strong media voice. She has 38,800 Twitter followers.

Strategies largely break along party lines. Republican candidates emboldened by Trump’s theories have leaned on Facebook to advertise, raise funds and — most important — organize and mobilize groups of supporters. Democrats have pinpointed supporters with issues-based email and texts, in aggressive reminders to make contributions and volunteer time to campaigns.

During and following the chaotic debate, Biden’s team highlighted his best sound bites and offered fact checks of Trump’s numerous false claims. It also tried to seize on potentially viral moments, and quickly came up with a link to buy a T-shirt with the line, “Will you shut up, man.”

A wild card in the mix this political season is The Lincoln Project. Republican operatives who created the Lincoln Project more as an anti-Trump vehicle than a pro-Biden operation, have developed a new hybrid of political brinkmanship. They create devastating ads overnight, distribute them across all forms of social media, and then follow up with targeted email and texts to raise funds from outraged voters.

“The Lincoln Project is using the president’s tactics against him,” Jason Mollica, a lecturer in the School of Communication at American University, told MarketWatch. “It has been especially good at activating people to go to the voting booth.”

“We are serving into Republican voters who have a reasonable chance of changing votes,” Ron Steslow, co-founder of The Lincoln Project, told MarketWatch. “Our message of COVID and chaos, the theme of the final days of the campaign, are being shared through Facebook, [streaming media services], Google and Instagram.”

Steslow hinted a future attack line might be over the Trump campaign’s massive effort to knock on the doors of voters, what he calls a “super-spreader organization.”

The Lincoln Project’s deftness and prodigious budget make it an outlier. Most political campaigns during the pandemic are relying on regular live streaming on Facebook and Instagram to interact with would-be voters, rather than talk at them in a traditional public event.

See also: If the Democrats win the Senate, Big Tech better be ready for a bigger fight

For example, Rep. Anna Eskamani, D-Fla., has extensively used Facebook Live throughout the pandemic to keep voters informed about unemployment benefits, among other things. Sen. Elizabeth Warren, D-Mass., used her Instagram account to chat live with supporters who made small contributions – often between $5 and $100 – to her presidential campaign. Rep. Alexandria Ocasio-Cortez, D-N.Y., is generally agreed upon as the best politician on the left in her use of social media.

“You don’t have to have the big money, big bucks, big fundraisers, big supporters to be able to communicate on Twitter with your constituency,” says Pinar Yildrim, assistant professor of marketing at the Wharton School and Senior Fellow at the Leonard Davis Institute at the University of Pennsylvania.

More important, effective use of social media has allowed candidates to “get around the gatekeepers” in the media, David Jackson, a political-science professor at Bowling Green State University, told MarketWatch. President George W. Bush did interviews with local TV stations to avoid national networks, President John F. Kennedy did the same with the networks to sidestep newspapers, and President Bill Clinton turned to MTV, Arsenio Hall and other pop culture touchstones to message voters.

“Trump is merely using another form of media, like previous presidents, to shape his story,” Jackson said.

Rep. Dan Crenshaw, R-Texas, a former United States Navy SEAL officer, often mixes in stories about his military career on social media to build his brand. U.S. Sen. Chuck Grassley, R-Iowa, has channeled his inner cranky personality on Twitter. Staffers, for example, explained to Grassley who the Kardashians are on the microblogging service.

“He’s embraced the angry old man, shaking his fist at the [computing] cloud,” Jackson says. “It shows the need to take risks, be authentic, do not set off bullshit meters.”

And, if there is one lesson to be learned from content, it is be quick to the punch, aggressive, bold and humorous. Democrat Joel O’Dorisio, who is running for the state senate in Ohio, gained more traction via a Sept. 21 tweet that tweaked his Republican opponent. In it, O’Dorisio poked fun at his opponent, sitting without a mask and not social distancing at a Trump rally in Toledo. “See you there, Theresa. But I’ll be outside protesting.” The tweet drew 16,314 impressions.

“It was timely, biting, and funny,” O’Dorisio told MarketWatch. “With social distancing, candidates are trying to figure out ways on how to reach more people. This worked really well.”