Commodities were once considered the most volatile asset class. However, the emergence and popularity of cryptocurrencies moved the raw materials asset class to the side when it comes to price variance.

Price appreciation and wild volatility are magnets for traders and investors. The potential to turn a small investment into a fortune is a powerful motivational tool. In my over four decades of trading and investing in markets, no asset provided the returns seen via , the leader of the cryptocurrency asset class.

In 2010, BTC traded at five cents per token. On Apr. 14, 2021, the price of the digital token hit its most recent peak at over $65,500. It is hard to imagine that a $10 investment in Bitcoin in 2010 would be worth a cool $13.1 million in mid-April. Bitcoin may have halved in value since Apr. 14, but it remains a compelling market with lots of potential for incredible price volatility.

A bearish trend since April 14

The CME’s June contract reached a high of $66,450 per token on Apr. 14. The high occurred on the day of the Coinbase Global (NASDAQ:) listing on NASDAQ. Bitcoin peaked that day, just as it did when the CME rolled out futures in late 2017, which pushed the price over the $20,000 per token for the first time.

Since the COIN listing and the most recent high, Bitcoin fell sharply on the back of concerns over its carbon footprint, and a as that nation rolls out its digital yuan.

As the chart highlights, Bitcoin futures plunged to a low of $30,275 on May 19. Since then, the June futures made marginally higher lows, with the price reaching $30,915 on June 8 and $31,715 on June 21. At around the $32,500 level on June 21, Bitcoin remains near the recent lows, with the leading cryptocurrency trading in a bearish trend.

Consolidation mode or a falling knife?

Time will tell if Bitcoin will continue to consolidate between the $30,000 and $42,500 level, the price range that has contained the crypto since late May. This goes for Bitcoin and the other, over 10,500 tokens floating around in cyberspace.

As the price sits within striking distance of the May 19 low, the potential for even lower lows remains high. Cryptocurrencies evoke lots of emotions today.

Proponents expect Bitcoin to rise to $100,000 and higher. Opponents expect it to become worthless. Some opponents, like Charlie Munger, Warren Buffett’s filter-less partner, recently called Bitcoin and other cryptos “disgusting and contrary to the interests of civilization.” In the past, Mr. Buffett said Bitcoin is “probably rat poison squared.”

The one thing supporters and detractors would likely agree on are that price variance will remain at a sky-high level over the coming weeks and months.

The fund has 31 crypto-adjacent holdings, of which the top three businesses are MicroStrategy (NASDAQ:), Coinbase and Marathon Digital Holdings (NASDAQ:). BITQ has $51.264 million in assets under management, trades an average of 115,851 shares each day, and charges an 0.85% management fee.

The ETF is new and began trading on May 12, almost one month after Bitcoin hit its high and Coinbase shares burst on the scene via a NASDAQ listing. 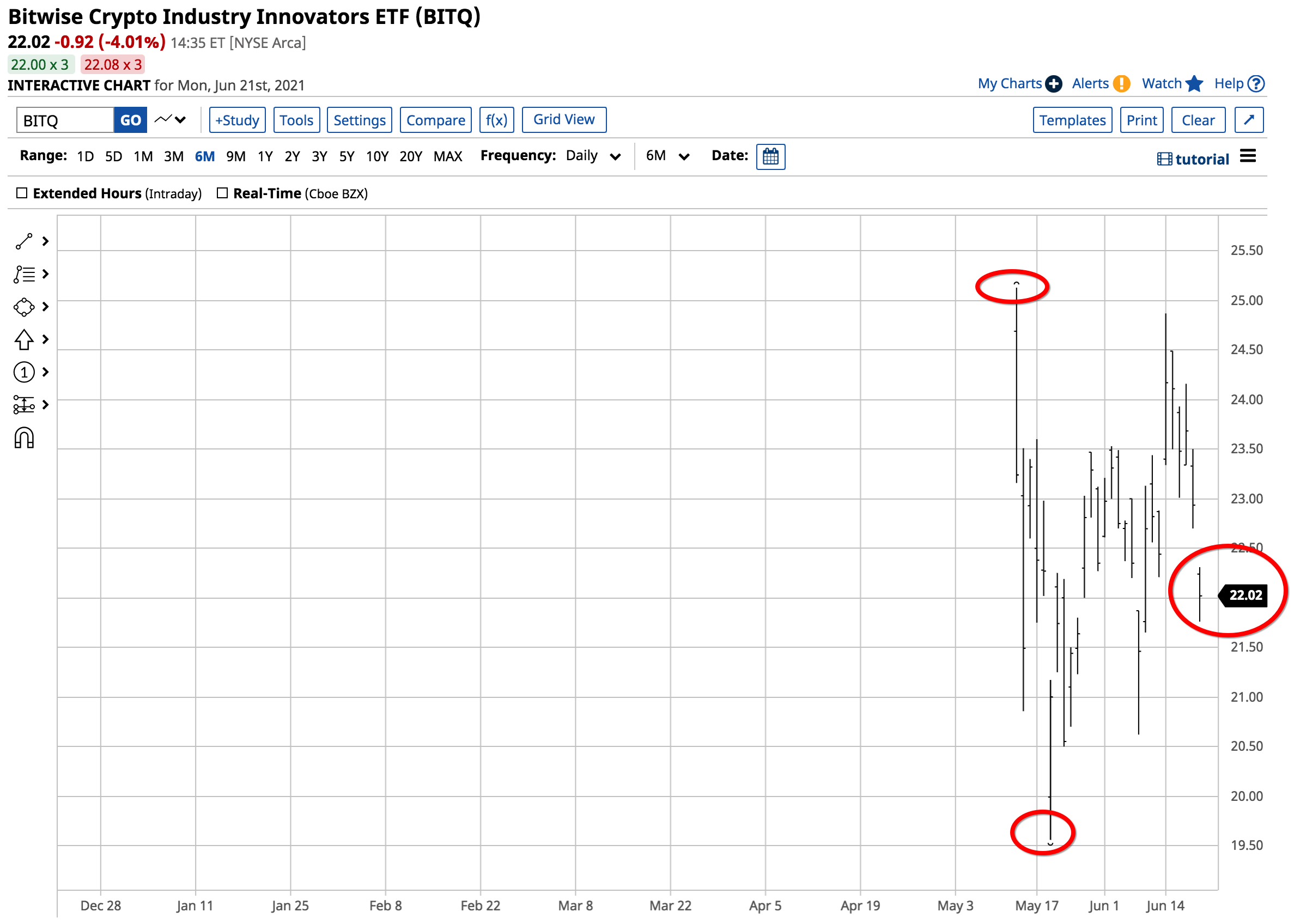 BITQ may not track Bitcoin’s price on a tick-for-tick basis, but the ETF has been correlated with the leading cryptocurrency and could be an adequate proxy for those looking to use a stock market product to replicate Bitcoin’s price performance.

The introduction of BITQ notwithstanding, a robust ETF product that tracks Bitcoin’s price, addresses the custody issue and provides investors and traders with a liquid tool that will increase the cryptocurrency asset class’s profile. However, the SEC has been dragging its feet on the approval of products for a variety of reasons.

SEC Chairman Gary Gensler is a fintech expert, having taught a course on the subject at MIT after he departed from the Commodity Futures Trading Commission (CFTC), where he served as Chairman during the Obama administration.

Aside from the nefarious uses of cryptocurrencies cited by many opponents, the potential for price manipulation is another issue facing regulators considering the approval of ETF products. Moreover, the overriding governmental concerns likely center around the control of the money supply.

The more Bitcoin and other cryptocurrencies replace traditional fiat currencies as a means of exchange in the global financial system, the more they threaten the government’s power, which comes from controlling the purse strings.

Until an actual Bitcoin ETF product comes on the scene, BITQ seems to provide a reasonable correlation with the cryptocurrency’s price action.