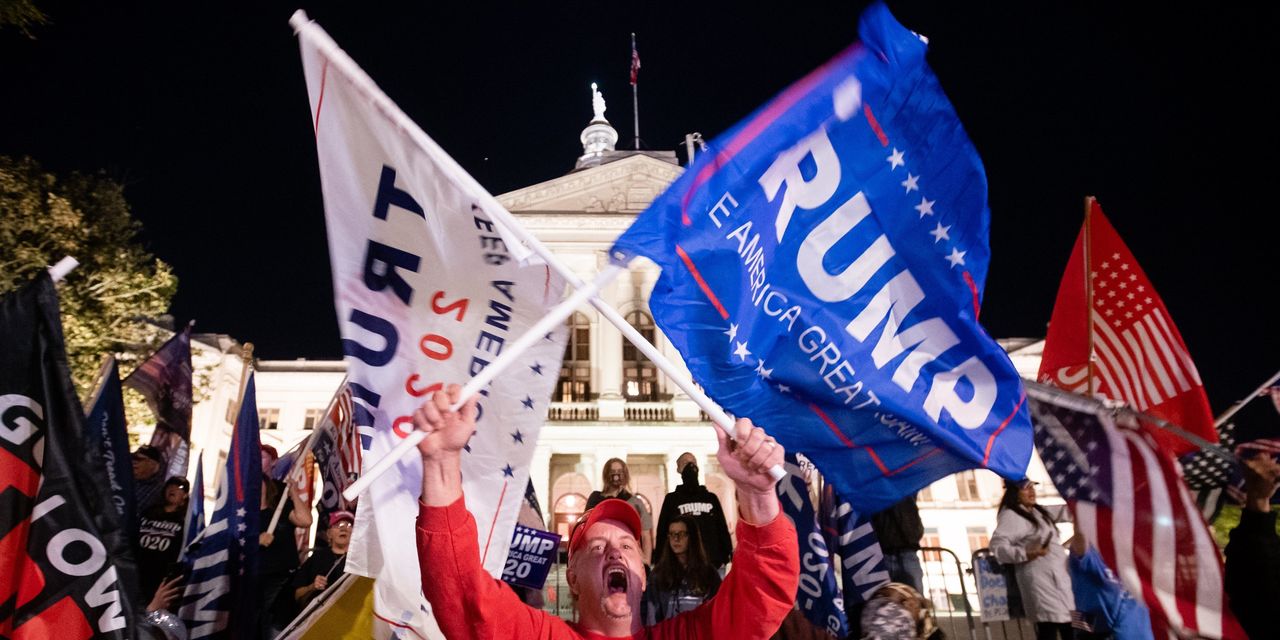 Donald Trump on Sunday tweeted his first tacit acknowledgment of former Vice President Joe Biden’s election victory — beginning a tweet with the words “He won” — but continued to claim the election was “rigged” and fraudulent without providing any evidence.

Federal agencies have deemed the voting process, conducted amid a protracted public health emergency, among of the most secure in U.S. history.

As Twitter users pondered the degree to which that initial tweet constituted the concession that Trump has withheld since the election was called in Biden’s favor eight days ago, Trump followed up: ‘He only won in the eyes of the FAKE NEWS MEDIA. I concede NOTHING!”

Biden’s victory was projected last Saturday by a number of news organizations, having determined that the Democrat’s wins in Pennsylvania and other key states had foreclosed all avenues to a Trump re-election.

Biden’s lead in the Electoral College math stands at 290-232, with strong indications that Biden will reach 306 electoral votes once Georgia’s audit is completed and that state called in the former vice president’s favor.

Trump’s win in the Electoral College over Hillary Clinton in 2016 was by the same count: 306-232. Clinton beat Trump in the popular vote by a shade fewer than 3 million votes, while Biden is poised to have received nearly 6 million more votes nationwide than Trump.

See: Biden says Trump’s failure to concede election is ‘not of much consequence’

Twitter has tagged both Trump tweets as “disputed,” as it has designated a number of social-media messages from individuals and organizations that are deemed to contain misleading or disputed information, without evidence, representing the stricter policies employed by social-media platforms in recent months.

Trump’s reiteration of his claim of “rigged” voting came after a recent statement from the Election Infrastructure Government Coordinating Council, GCC, Executive Committee and the Election Infrastructure Sector Coordinating Council, which confirmed the security of the vote process that came amid the backdrop of the COVID-19 pandemic, which saw a historic number of mail-in ballots.

“The November 3rd election was the most secure in American history,” read the statement from the GCC and election council.

Trump’s Sunday tweet also follows a gathering of thousands of supporters of the 45th president, who assembled in downtown Washington, D.C., on Saturday to protest the results of the election.

Brandishing U.S., Trump and other flags and symbols and chanting “four more years,” the protesters repeated unfounded allegations that the election had been marred by fraud.

On Friday, Trump, in remarks in the White House’s Rose Garden meant to address progress on vaccines to fight the novel coronavirus causing the disease COVID-19, continued to refuse to concede the White House race to Biden, but seemed to imply the possibility that his administration may not be victorious in the end.

“Whatever happens in the future, who knows which administration it will be — I guess time will tell, but I can tell you this administration will not go to a lockdown,” Trump said as he discussed “Operation Warp Speed,” the public-private partnership that aims to accelerate development of a COVID-19 vaccine.

Trump didn’t respond to reporters’ shouted questions about conceding the election on Friday.