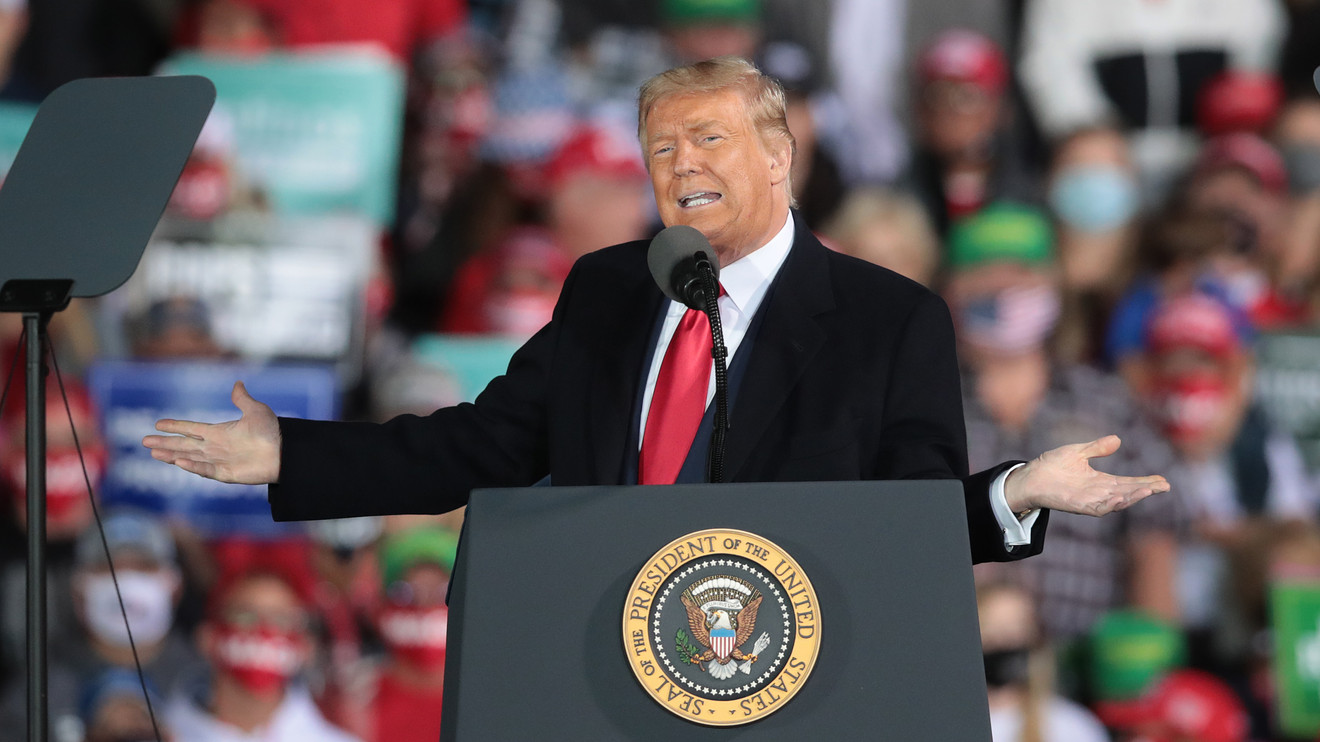 Thousands of Americans see their tax returns audited every year — but it’s safe to say none have seen an audit go on as long as President Donald Trump’s.

Since he first launched a run for the White House in 2016, Trump has declined to release his tax returns. One reason he commonly cites as to why he can’t — including during Thursday’s town hall event on NBC — is that he is undergoing an audit.

“It’s very routine, in many ways, but we’re under audit,” President Trump said Thursday in response to a question from the town hall’s moderator, Savannah Guthrie. He later added that he “would love to release” his taxes and will do so when the audit is complete.

Yet experts interviewed by MarketWatch said that it’s far from routine to see an audit last as long as Trump’s has.

“An audit definitely can drag out,” said Francine Lipman, a law professor at the University of Nevada, Las Vegas, and a certified public accountant. “But not 10 years. That doesn’t pass the smell test.”

Why is President Trump being audited?

investigation, which reported that Trump only paid $750 in federal taxes the year he entered the White House, provided more details regarding that audit, albeit not a complete picture.

The Trump campaign noted that the Times story has no allegation of wrongdoing against the president. The article is based on “incomplete documents and is “inaccurate as the President has paid tens of millions of dollars in taxes,” a spokesman said. However, on Thursday night, Trump referred to the $750 figure as being “a statutory number” and a “filing number,” before saying that he did not know if that’s all he paid.

Trump paid $70.1 million in income taxes from 2005 to 2007, the Times story said. It also noted that in the 2016 and 2017 tax years, Trump paid a total $5.2 million, but those payments were “rolled forward to cover potential taxes in future years” while the president tapped tax credits to address his tax liability.

The audit centers on Trump’s 2010 tax return, through which he claimed and received a refund totaling $72.9 million, according to the report. That amount includes all of the federal tax he had paid from 2005 until 2008 plus interest. The refund was made possible through some $1.4 billion in losses that Trump claimed for his core businesses in 2008 and 2009.

Given the size of the refund, Trump’s audit is very much unlike what the average American would experience if their return were to come under scrutiny from the Internal Revenue Service. But even among high-net worth individuals, an audit like Trump’s is highly unusual in many ways, experts said. The Trump Organization did not respond to request for comment on the audit.

How long do most people’s audits last?

People who make more money are more likely to be audited, there’s an exception to that rule: People who claim the Earned Income Tax Credit.

This tax credit is targeted toward low-income Americans. And in terms of numbers, the IRS processes far more audits of these taxpayers than it does for any other group of people. Of the roughly 681,000 returns that were examined in fiscal year 2019, more than 301,000 were for individual returns where this tax credit was claimed, according to IRS data.

These audits are highly automated affairs, but that doesn’t mean they go by all that quickly. Experts say that the typical audit takes anywhere from three to nine months to be resolved.

On its website, the IRS notes that a statute of limitations generally limits the amount of time to assess additional tax on a return to three years from when that return was due or filed. However the agency can request an extension if an audit is not resolved.

(The IRS did not immediately provide comment when asked for data regarding the average duration of audits.)

“People have this conception of an audit that the IRS is going to knock on your door and talk to you,” said Michelle Drumbl, a professor and director at Washington & Lee University School of Law’s Tax Clinic. “The majority of audits would be done by mail.”

Mail-based audits are also known as correspondence audits. In many cases these audits are triggered when the IRS’ system flags a return for some issue, whether it’s a question about a taxpayer’s qualifying for the EITC or something as simple as a math error. The agency then sends the taxpayer a letter informing them that they’re being audited.

The language of these letters can leave taxpayers confused, experts told MarketWatch, which can draw out the process if they don’t respond expediently. It’s “very common” for taxpayers to not even understand that they’re under audit, Drumbl said. “The notices are very boiler-plate, catch-all.”

Typically, the letter will request documentation to clarify the perceived error or justify the claiming of a tax credit. Taxpayers then send those materials to a specific IRS campus to be processed to determine if enough documentation was provided.

While a taxpayer can respond on their own, IRS agents have little leeway in what they can accept. And taxpayers are not always aware of the required documentation, especially when it comes to providing proof that you have children in your household for the EITC.

Low-income taxpayers may have access to pro bono attorneys who can help them with their audit. Even then though, there are limits to what a lawyer can do to speed up the process in most situations beyond helping their client come up with the right paperwork.

“I have no ability as a lawyer to cut through the red tape,” Drumbl said. Taxpayers can call the IRS for clarification, but when they do they can expect long waits on hold. For these audits, though, the IRS doesn’t assign an examiner to a specific audit, so multiple agency employees will handle a case. That can make getting clear answers over the phone more difficult.

“
‘I have no ability as a lawyer to cut through the red tape.’
”

And because everything with correspondence audits is handled by mail, it can take weeks for new documents to be received and processed, even before COVID-19 slowed down matters. In that time, the IRS may send out repeat notices, which can confuse taxpayers, Lipman said. In even worse scenarios, the time lag can lead to taxpayers’ amounts due being sent to collections even though documents responding to the audit are still in transit.

“The agency is overworked and understaffed, and there are a lot of taxpayers,” Drumbl said.

Tax experts interviewed by MarketWatch noted that when high-net-worth individuals like President Trump face an audit, their legal or financial counsel can take steps to an extend an audit to ensure a more beneficial outcome.

“If you’re represented by counsel, you just turn this over to your accountant or lawyer and they handle it,” Lipman said. “Donald Trump isn’t interacting directly with the IRS at all.”

When audits are performed on sizable returns or in scenarios where a taxpayer owns multiple businesses, an office or field examination may occur where the taxpayer or their representative meets in person with an IRS agent to go over materials.

“That elevates it to a much more sophisticated level,” Lipman said. “You’re working one-on-one with someone, which very much humanizes it. It beats people answering the phone.”

“
‘The slow, steady situation for represented taxpayers benefits the taxpayer because they can slowly wear down the audit.’
”


— Francine Lipman, a law professor at the University of Nevada, Las Vegas

What it doesn’t do, however, is speed up the process. A taxpayer’s lawyer in this case can choose to dispute different elements of the audit to purposefully slow matters down. They can also appeal to higher-ranking officials within the IRS. If a taxpayer is unsatisfied with the agency’s final determination, they can then choose to take the case to court.

“The slow, steady situation for represented taxpayers benefits the taxpayer because they can slowly wear down the audit,” Lipman said. “It’s actually a human being that’s the auditor, and they’re motivated to close the cases.”

Trump cited his lawyers during Thursday night’s town hall as advising him not to release his tax returns, since doing so could complicate a possible deal with the agency. “No person in their right mind would release, prior to working out the deal with the IRS,” he said.

Furthermore, in many cases where the government is set to pay a refund of more than $2 million, the return will be reviewed by the Joint Committee on Taxation. This committee is nonpartisan and composed of 10 members, five from the Senate Finance Committee and five from the House Ways and Means Committee. The committee’s staff attorneys review these reports, and the body will either choose to clear a return for a refund or issue a recommendation to the IRS of a different outcome.

As of 2016, in most situations, the committee’s cases were closed within 45 days of receiving them from the IRS.

The IRS stipulates that the individual tax returns for the president and the vice president “are subject to mandatory examinations.” The policy has been in place since the Watergate scandal — meaning that every president since Richard Nixon has had their income tax returns audited.

The IRS handbook stipulates in detail how these audits are performed. Specific personnel are assigned to the audit, and the agency works with representatives for the president and vice president during the review. Personnel are even required to keep the returns locked in a secure drawer and kept in an orange folder.


— Steve Rosenthal, a senior fellow at the Urban-Brookings Tax Policy Center, on why President Trump hasn’t settled his audit

The manual further notes that the returns “require expeditious handling at all levels to ensure prompt completion of the examinations.” Because presidents are regularly audited, tax experts expressed concern with the president’s claims that some of his past returns are still under review.

Rosenthal expressed concerns that Trump might be purposefully extending out the audit he’s facing, noting that because he appointed the officials in charge of the IRS there are also conflicts of interest at play.

On top of that, Trump himself has admitted to aggressively seeking out deductions and write-offs to limit his liability. In many cases, another person in the president’s situation might opt to simply accept the IRS’ determination and pay whatever money they might owe.

“I can’t say I’ve seen anyone who’s aggressive on such a sustained basis as Trump,” Rosenthal said. “He’s not inclined to write a check — and I’m not sure how much money he actually has to write a check.”