Trump storms South as Biden racks up wins in Northeast — but Florida, Pennsylvania too early to call 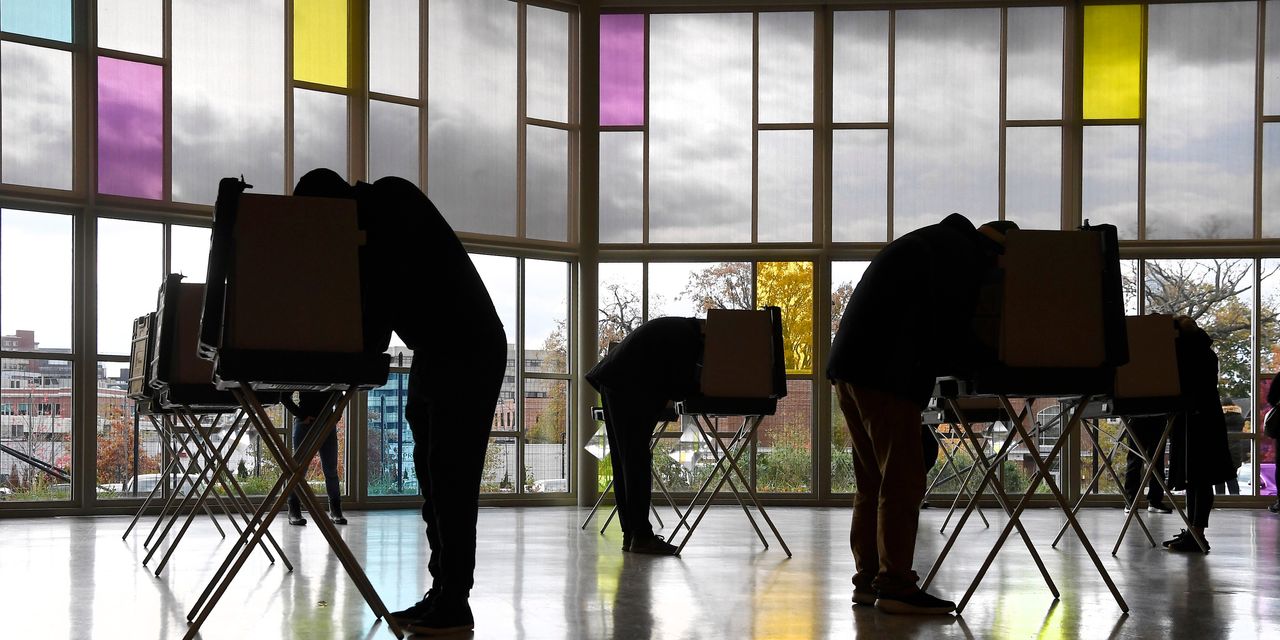 President Donald Trump racked up wins in the South as his opponent, Joe Biden, won states in the Northeast, but big battleground states were too early to call on Tuesday night as polls were closing across the country.

After a bitter election campaign fought over the damage wrought to the economy by the coronavirus pandemic, Biden won states including Connecticut, Delaware and New Jersey, as well as scoring victories in Illinois and Virginia.

Trump won Alabama, Kentucky, West Virginia and other states in the South, the Associated Press projected.

But there were no calls made yet for the critical battlegrounds of Florida and Pennsylvania, two states that could decide who wins the White House this year.

Braving the lingering threat from the virus, voters cast ballots in person around the nation, reportedly facing long lines in states including Connecticut, New York and Pennsylvania, though Americans had already smashed early-voting records, a sign of the fervor around the Trump-Biden contest.

The first polls closed at 6 p.m. Eastern in Indiana and Kentucky, with others including Florida and Georgia following at 7 p.m. Alaska’s are the final polls to close, at 1 a.m. Eastern.

As Election Day dawned, Biden had a clear lead over Trump in national opinion polls and a smaller edge in surveys of the battleground-state voters who are likely to decide the election.

-related predictor was pointing to a Biden victory, even as Trump consistently warns that the Democrat would cause equities
DJIA,

Biden spent the morning attending a church service and visiting his birthplace of Scranton, Pa., while Trump appeared on “Fox & Friends” and asserted he’s got a good chance of winning the race.

U.S. stocks finished sharply higher on Tuesday as investors awaited the outcome of the presidential race, as well as a possible shift in Senate control to the Democrats.

Trump and Biden crisscrossed the country in the final days of the campaign, driving home disparate messages about the challenges facing the nation and remedies to fix them.

“I think we have a very solid chance” of winning, Trump said on the Fox program. The president has aggressively campaigned in person despite rising cases of coronavirus in many states.

Speaking at his campaign headquarters in Virginia, Trump said, “winning is easy.” But he added, “losing is never easy, not for me it’s not.”

Biden told voters he would “restore the soul of the country,” repeating a frequent line from his campaign. At a separate appearance in Philadelphia, he said, “we’re going to rebuild the middle class.”

Though Biden has appeared at many in-person events, he has held many more virtual ones, and frequently wears a mask, in contrast to his GOP opponent.

Senate control also hangs in the balance in Tuesday’s election, with Democrats battling to reclaim the chamber from Republicans. Should Biden win the White House and Democrats take the Senate while holding the House of Representatives, the party would have an easier time enacting major economic aid or tax increases.

Competitive Senate races in Alabama and Maine were not yet called by the AP as of around 8:30 p.m. Eastern. Senate Majority Leader Mitch McConnell, meanwhile, was re-elected to his seat. The Kentucky Republican defeated challenger Amy McGrath.

As MarketWatch has written, continued Republican control of the Senate if Biden wins may limit the size of any new coronavirus aid bill.

Read: Don’t count on a ‘blue sweep’: Markets are starting to get jittery over the possibility of another divided government in Washington post-election.

The Senate is now controlled 53-47 by Republicans. To win control, Democrats need to net four seats, or three if Biden wins the White House. There are more than a dozen competitive races, including in Iowa, Maine and South Carolina.

Key states to watch Tuesday include Florida, Pennsylvania and Wisconsin. As the Associated Press writes, both Trump and Biden each have a path to the 270 Electoral College votes needed for a White House win, but Biden’s is wider. With Biden now competitive in the battleground states Trump carried in 2016, and putting others in play, Trump’s hopes are on Florida and Pennsylvania.

Calling a winner is by no means a given on Tuesday night or early Wednesday. Pennsylvania’s chief election official warned last weekend that the outcome of the race there likely won’t be known on election night. And if Florida’s vote is close, it could be days or weeks before results are certified, Susan MacManus, a professor emerita at the University of South Florida, told MarketWatch.

Now read: Could Election Night 2020 drag on for days, or even weeks? These states may offer clues.

Also see: 5 things to do on election night instead of freaking out. ‘Worry isn’t going to get the election result that we want.’

The 2020 campaign has played out amid the crushing blow dealt by the coronavirus to the U.S. economy. By most measures, as MarketWatch has written, the country remains in a deep recession even as the economy has recovered faster than expected from the pandemic. Unemployment is near 8%, more than twice the pre-crisis level but down sharply from 14.7% in April.

Read: Here’s where the economy stands as the U.S. chooses between Trump and Biden.

With U.S. coronavirus cases past 9 million, Biden has hammered Trump for what he says is the mismanagement of the crisis, while Trump has claimed the country is “rounding the corner” on the pandemic. Trump himself was hospitalized for three days with the virus, and frequently lays blame for it on China, where it emerged late last year.

In debates with Biden, Trump has stressed that the U.S. economy shouldn’t be shut down again. Biden has said he won’t rule out shutdowns but has emphasized that he’ll “shut down the virus, not the country.” The former vice president has spoken of the need for a nationwide mask mandate, while Trump touts his “Operation Warp Speed” effort to develop vaccines.

Trump has also talked up a middle-class tax cut if he wins another term, while blasting Biden’s own ideas. The former vice president’s plans include raising taxes on those making more than $400,000 a year, to fund increased spending on infrastructure, health care and education. Trump floated a middle-class tax cut two years ago, but a plan never materialized, though corporate tax rates were cut.

Biden, 77, is making his third run for the White House. The former vice president has framed the contest as a battle for the “soul of the nation,” telling voters he’d heal a deeply divided country.

Trump frequently cast the race in economic terms, arguing without evidence that Biden’s tax plans, for example, would cause an economic catastrophe for the country and decimate investors’ portfolios.

If elected Biden will inherit a struggling economy and huge governmen budget deficits, as well as face pressure from the left wing of the party to pursue a progressive agenda.

The 74-year-old Trump is hoping for a come-from-behind victory on Tuesday. On the stump, the president frequently touts stock-market records, replacing or abandoning international trade deals he believes are bad for the U.S., and the appointment of three Supreme Court justices.

Trump is facing voters who have negative views of his overall performance. In the latest Wall Street Journal/NBC News poll, more voters viewed Trump unfavorably than favorably, even as they gave him higher marks for his handling of the economy. On his management of the pandemic though, 57% disapproved.

Canadian Dollar in Spotlight, With Eyes on BoC and Oil Price