The social media website teased seven pieces in a series of tweets from its official account Wednesday. In the initial post announcing the drop, Twitter’s team wrote that it would be releasing “140 free NFTs for 140 of you, besties.” 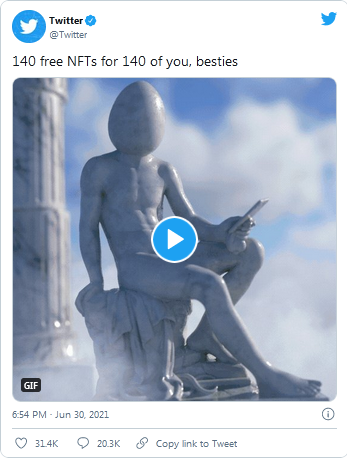 Twitter’s official account, which has over 59 million followers, also amended its bio to read “dropping NFTs all day.”

The seven pieces are listed on Rarible, a popular marketplace for trading -based NFTs (the listings note that the pieces are “Not for sale.”)

The pieces are heavily themed on the social media platform: one makes reference to Jack Dorsey’s first-ever tweet, while another shows the evolution of the Twitter logo.

NFTs, otherwise known as non-fungible tokens, are a type of asset that have their own accompanying data recorded on a blockchain. They can encompass digital art, music, tweets, and just about any other type of content, and are useful for proving the owner and scarcity of an asset. Most NFTs are digital items, though they can also be used for physical pieces such as paintings.

Jack Dorsey, Twitter’s founder and CEO, has experimented with the technology in recent months, releasing a tokenized version of his first tweet via the Cent platform. Yesterday, he also alluded to his interest in the space in reference to Tidal, the music streaming platform he runs with Jay-Z. Those comments came after he affirmed that his main interest in crypto is with (though NFTs can exist on Bitcoin, Twitter’s pieces have been minted on Ethereum).

Twitter is one of the world’s most popular social media apps, used by about 200 million daily active users.