U.S. counts record of almost 4,000 COVID-19 deaths in a day as virus continues to wreak havoc 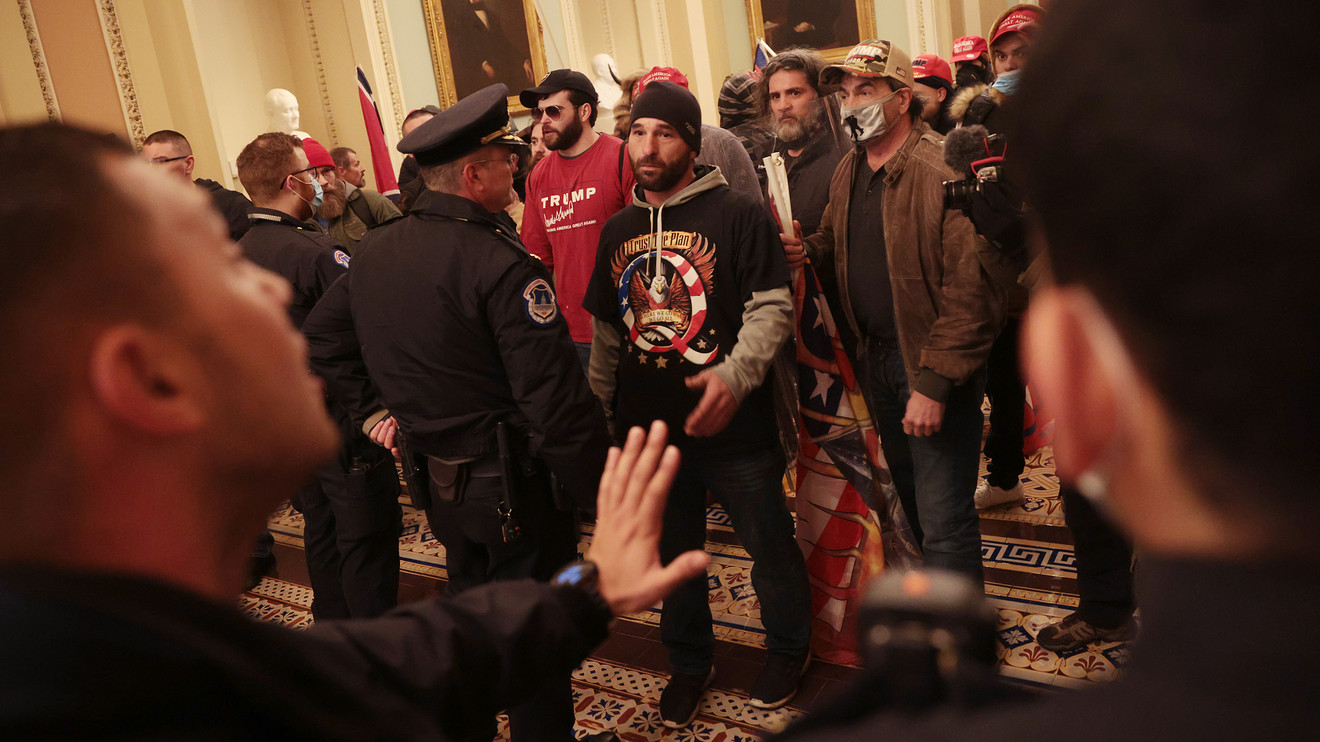 As the political drama unfolded in Washington, D.C. on Wednesday, COVID-19 continued to wreak havoc in the U.S., claiming a record of almost 4,000 American lives, the most in a single day since the start of the outbreak.

There were at least 3,963 COVID-19 deaths, according to a New York Times tracker, and another 255,730 cases were diagnosed. The U.S. has averaged 230,610 cases a day for the past week, numbers that are higher than the worst case scenarios envisaged by experts early in the crisis.

Several states, including New Hampshire, Oklahoma and Pennsylvania, set single-day records for deaths, and Illinois joined four other states — California, New York, Florida and Texas — which have reported more than a million cases.

The U.S. continues to lead the world by cases, at 21.3 million, and deaths, at 361,297, according to data aggregated by Johns Hopkins University, or about a fifth of the global totals. The U.S. has more than double the number of cases as India, at 10.3 million, the second highest tally in the world.

The mob that stormed the U.S. Capitol building likely created a superspreader event during and after the event also, as few wore face masks, according to experts. Such superspreader events are expected to increase given the highly infectious new variant of the virus that first emerged in the U.K. and is deemed to be 40% to 70% more transmissible than the original virus.

Rep. Susan Wild, a Pennsylvania Democrat, told CBS that members of Congress who were placed in a secure location during the riot with 300 people to 400 people, also created a superspreader event as many lawmakers refused to wear a face mask.

“It’s what I would call a COVID super spreader event. About half of the people in the room are not wearing masks, even though they’ve been offered surgical masks,” Wild said on CBS. “They’ve refused to wear them.”

Wild said Republicans were the main refuseniks, with some freshman Republican congressmen “openly flaunting” the fact that they would not wear a mask.

“It’s exactly the kind of situation that we’ve been told by the medical doctors not to be in, you know, close proximity, especially with people who aren’t wearing masks,” Wild added. “We weren’t even allowed to get together with our families for Thanksgiving and Christmas, and now we’re in a room with people who are flaunting the rules and are very much crowded in here.”

Meanwhile, the U.S. vaccination program continues to make painfully slow progress. The Centers for Disease Control and Prevention’s vaccine tracker shows that as of 9.00 a.m. ET Wednesday, just 5.3 million people had been dosed, and 17.3 million doses distributed, far below the most recently revised promise of 20 million by end-December. The federal government had originally promised 100 million doses would be delivered in that time frame.

President Donald Trump has left it to states to administer the vaccine program — tweeting that it was “up to the states to administer” and then calling some states “very slow” — meaning that stressed state health departments, which have already had to deal with testing, contact tracing, public information campaigns and deciding when or whether schools or businesses should be open or closed, are now tasked with handling the biggest public health effort in decades.

Dr. Nancy Messonnier, director of the CDC’s National Center for Immunization and Respiratory Diseases, said Wednesday that part of the delay is due to the fact that the vaccine program was launched during a holiday week.

“I think because of that, many jurisdictions had planned for slightly measured initial weeks of rollout to get them comfortable with the vaccine and, again, to account for it being the holiday week. Now that the holidays over I except this program to continue to escalate and actually escalate really quickly,” she told reporters on a call.

See now:CDC officials say people with history of allergic reactions should be monitored after receiving a COVID-19 shot

“I continue to believe that the risk of COVID and the risk of poor outcomes, especially in senior citizens, makes it imperative that people go ahead and get vaccinated as soon as it’s available to them,” she said.

• A new report suggests the U.S.’ high numbers are vastly understated. The cross-sectional study, which was published Tuesday in JAMA Network Open, examined under-reporting for infections, hospitalizations and deaths related to COVID-19 in the U.S., estimating that there were roughly 46 million cases, including 28 million symptomatic infections; about 950,000 hospitalizations; and 305,000 deaths through Nov. 15. The researchers say case counts, hospitalizations, and deaths are likely much higher because many people with symptomatic infections as well as most asymptomatic people did not seek medical care and were not tracked in the health system. “There remains a substantial gap between the estimated proportion of the population infected and the proportion infected that is required for herd immunity,” which is thought to be around 60%, the researchers concluded.

• The COVID-19 vaccine candidate being developed by Johnson & Johnson
JNJ,

subsidiary Janssen Pharmaceutica could be granted emergency authorization by U.K. regulators within weeks, boosting the country’s mass immunization program amid a surge of coronavirus cases, MarketWatch’s Lina Saigol reported. John Bell, regius professor of medicine at the University of Oxford and an adviser to the U.K.’s Vaccine Taskforce, told the Daily Telegraph: “My prediction is that it’ll work well, although we need to wait for the trial results.” He added: “I think they will have supplies available for the U.K. in a time frame that would allow it just to catch the mid-February target of getting the numbers up. I think it may well have a material impact on what we can do in the U.K. to get more people vaccinated.”

• The World Health Organization’s regional head for Europe Hans Kluge is warning that more needs to be done to deal with the new variant of the virus that is racing across the continent. Kluge told reporters at a briefing that the new strain is “a tipping point” in the course of the pandemic. “This is an alarming situation, which means that for a short period of time we need to do more than we have done and to intensify the public health and social measures to be certain we can flatten the steep vertical line in some countries,” Kluge said.

• Russia passed a grim milestone on Thursday of more than 60,000 deaths from COVID-19, The Moscow Times reported. Official figures showed 506 new deaths and 23,541 new cases in the past 24 hours. Russia has had 3.3 million confirmed cases of the deadly illness and 60,457 people have died.

Don’t miss:Telemedicine provides people with a lifeline during the pandemic — but once again highlights the divide between rich and poor

• German Chancellor Angela Merkel said the country is facing a far longer lockdown if states do not make a greater effort to implement tough restrictions, the Guardian reported. The number of confirmed coronavirus cases in Germany rose by 26,391 in a day to 1.84 million, the Robert Koch Institute for infectious diseases said on Thursday. The overall death toll rose by 1,070 to 37,607. In an effort to slow the spread of the virus, Merkel and the leaders of Germany’s 16 federal states on Tuesday agreed to extend a nationwide lockdown until the end of the month and introduce tougher restrictions.

The number of confirmed cases of COVID-19 worldwide climbed above 87.3 million on Thursday, the Johns Hopkins data show, and the death toll rose to 1.9 million. About 49 million people have recovered from COVID-19.

China, where the virus was first discovered late last year, has had 96,432 confirmed cases and 4,788 deaths, according to its official numbers.

The number of Americans who applied for jobless benefits fell slightly in the first week of the new year, but unemployment is still extremely high and unlikely to fall much until the record coronavirus pandemic recedes, MarketWatch’s Jeffry Bartash reported.

Initial jobless claims filed traditionally through the states fell by 3,000 to a seasonally adjusted 787,000 in the seven days ended Jan. 2, the government said Thursday. The prior week’s number was revised up by 3,000 to 790,000.

Another 161,460 applications were filed through a temporary federal-relief program, but that was barely half as many as in the prior week.

The decline likely stemmed from a brief expiration of the federal program. President Trump signed a law reauthorizing extended benefits in late December one day after the program expired. The new law also provides up to $300 a week in additional federal cash benefits.

“While prospects for the economy later in 2021 are upbeat, the economy and labor market will have to navigate some difficult terrain between now and then, and we expect claims to remain elevated,” wrote lead U.S. economist Nancy Vanden Houten of Oxford Economics in a note to clients.

The trade gap expanded to $68.1 billion from $63.1 billion in the prior month. Economists surveyed by the Wall Street Journal had forecast a deficit of $67.3 billion.

Both imports and exports grew in November, but imports expanded at a much faster pace. Imports rose 2.9% to $252.3 billion in November, while exports jumped 1.2% to $184.2 billion.

Separately, data showed the large service side of the U.S. economy grew somewhat faster in December despite a record increase in coronavirus cases, as companies took hope in the rollout of vaccines and looked toward the future.

A survey of senior executives at non-manufacturing companies rose to a three-month high of 57.2% from 55.9% in the prior month, the Institute for Supply Management said Thursday.

Readings above 50% signal that businesses are expanding.

A similar ISM survey of manufacturers also rose in December to a nearly two-and-a-half year high. Manufacturers don’t deal directly with customers and have been better shielded from the virus.

My wife found a half brother through Ancestry.com. Are we morally or ethically obligated to share her father’s estate?

My wife found a half brother through Ancestry.com. Are we morally or ethically obligated to share her father’s estate?