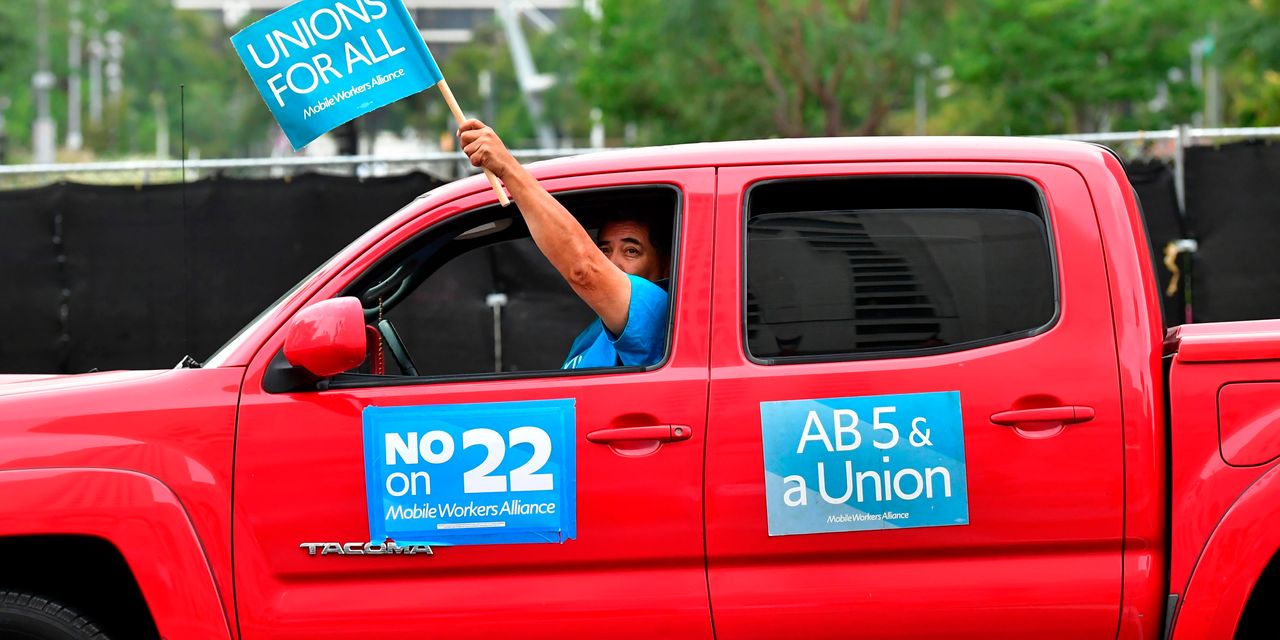 California voters exempted ride-hailing and food-delivery drivers from the state’s labor laws Tuesday, handing Uber Technologies Inc. and other companies a victory in the fight for the gig-economy business model.

California voters were voting 58% in favor of Proposition 22, which would allow drivers to be considered independent contractors instead of employees, with more than two-thirds of precincts partially reporting Tuesday night, and the Associated Press projected it would pass a few minutes before midnight Pacific time. The campaign has been the most expensive in the state’s history with $205 million in contributions just to the “Yes on 22” side, led by $58.3 million from Uber
UBER,

The Yes on 22 campaign said in a statement that “Prop. 22 represents the future of work in an increasingly technologically-driven economy.”

The initiative absolves gig companies from having to live up to Assembly Bill 5, a California law that went into effect in January and establishes a new standard for what workers are employees that was set by a 2018 state Supreme Court ruling. Prop. 22 makes some concessions, providing gig workers in California with an earnings guarantee for the first time, plus some disability coverage and health care subsidies that are dependent on the number of hours they work.

For more: How Uber and Lyft’s business model could be changed on Election Day

Critics of the measure point out the earnings guarantee of 120% of the minimum wage applies only to “engaged” time, which would not count when workers are waiting for a fare or an order. Estimates of hourly wages under Prop. 22’s guarantees range widely: The Labor Center at UC Berkeley expects workers to earn as little as $5.64 an hour under the initiative, less than half of California’s minimum wage of $13 an hour, but a study by UC Riverside School of Business Center for Economic Forecasting and Development, which was commissioned by Uber and Lyft, estimates earnings of $25 to $27 an hour.

The No on 22 campaign, largely funded by labor unions, raised less than a tenth of what the gig companies spent to support the measure, roughly $20 million.

“We used everything we could to reach people,” Nicole Moore, a Los Angeles-based driver and worker organizer with Rideshare Drivers United, said Tuesday night. “We texted, called, we caravanned from San Diego to San Francisco.”

Prop. 22 is expected to go into effect on Dec. 16, five days after the election results are certified by California’s secretary of state, and should halt an injunction instituted by a judge ordering Uber and Lyft to comply with the law.

For more: Uber and Lyft told to classify drivers as employees less than two weeks before California votes on the issue

The gig companies may not be entirely off the hook in that case, though. They were ordered to comply with California law in August, a decision that was upheld by a state appeals court last month, and could face penalties for the time they were not in compliance.

“I don’t read Prop. 22 as retroactive,” said William Gould, law professor emeritus at Stanford and a former chairman of the National Labor Relations Board.

San Francisco Superior Court Judge Ethan Schulman, who granted the injunction sought by the California attorney general and the city attorneys of San Francisco, Los Angeles and San Diego, said in his Aug. 10 ruling that “even if the ballot initiative passes, it would not moot out the People’s prayer for remedies for past violations.”