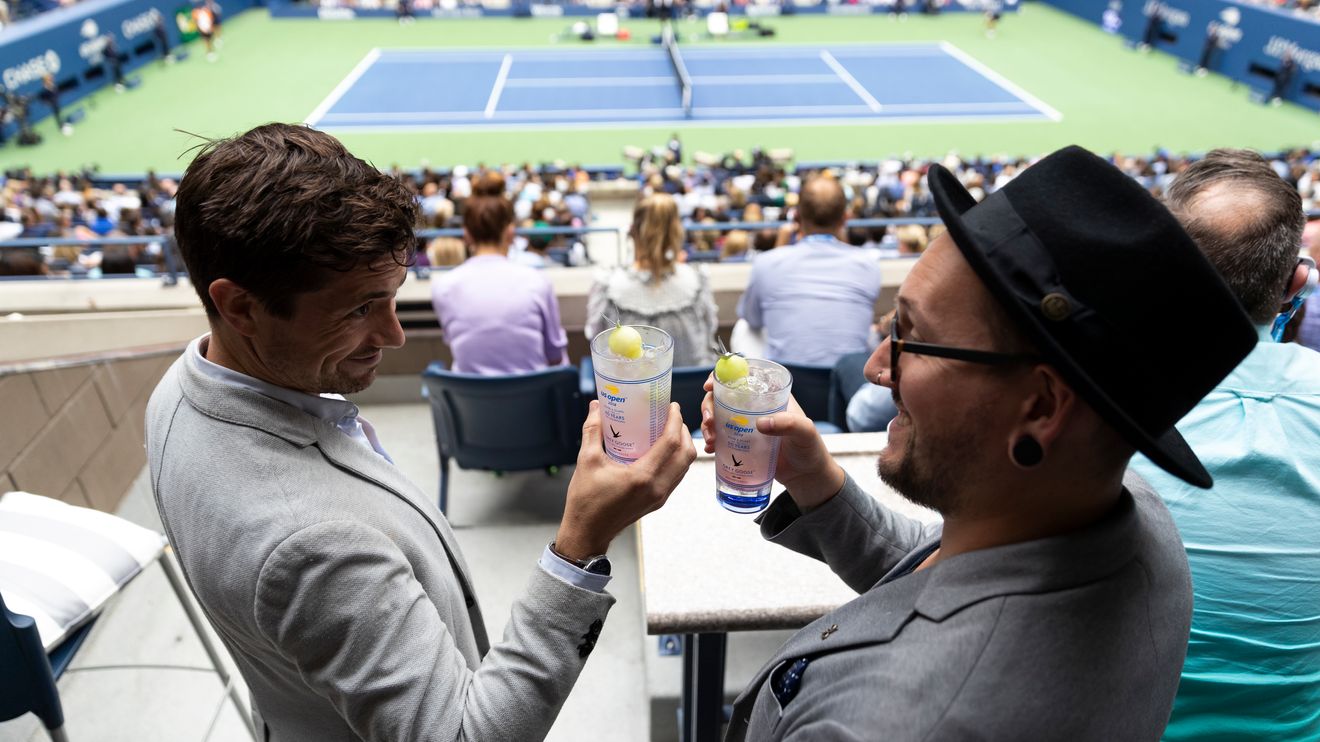 When Michele Capaccio attends the U.S. Open, perhaps the last thing on her mind is tennis. Instead, she talks about the hospitality, the ambience and even the sushi she is served.

For Capaccio, the “event” is being a guest in what many consider the tournament’s ultimate luxury suite, hosted by Emirates airline. The center-court setup is designed to mimic the deluxe experience aboard an Emirates flight, with hostesses attending to the needs of the up to 80 guests on hand for each session.

Some, like Capaccio, who works in the travel industry, are invited by the Dubai-based carrier, but Emirates regulars can also use tens of thousands of frequent-flier miles to gain admission. Celebrities are also often in attendance, with Emirates saying that Lin-Manuel Miranda and Spike Lee have been previous guests.

Those on hand get to dine on a menu that can include everything from crab cakes and gourmet sliders to, yes, sushi. If they’re thirsty, there’s plenty of Champagne to sip. Oh, and they can watch tennis as well — from seats replete with comfy cushions that naturally bear the Emirates logo.

Emirates, a major U.S. Open sponsor that pours more than $50 million into the program, is nevertheless one of many companies that have suites at the event. The United States Tennis Association (USTA), which runs the U.S. Open, also notes that the suites — typically, for groups up to 20 — can be rented by anyone. The cost ranges from $15,000 to more than $100,000, depending on the session and demand.

The luxury push goes beyond that. This year at the Open, which started in late August and runs through Sept. 12 and features such top players as Naomi Osaka and Novak Djokovic vying for titles, the USTA is offering multiple VIP-style options. Topping the list: a premier courtside package that comes with a seat in the first couple of rows along with every conceivable amenity, from a dedicated concierge on site to a behind-the-scenes tour. The price: up to $10,000.

The push for premium options at what is arguably the tennis world’s most glittering showcase should come as no surprise. Over the past several years, VIP offerings have proliferated at a range of sports and entertainment events. For their upcoming tour, the Rolling Stones have several VIP packages that range from $199 to $849 for some dates, according to Ticketmaster, though that’s almost a bargain in the realm of premium pricing.

The boom in upgraded experiences also extends to theme parks: Disney recently announced that it’s going to charge for a cut-the-queue service that it used to offer for free to park guests.

Still, experts in upscale marketing say the U.S. Open is a prime platform for VIP offerings.

“It’s become this event that caters to the most successful people in the country and world,” said Dan Curtis, founder of Vices.com, a luxury gift box and subscription-membership program.

That’s a point not disputed by the USTA, which notes that the average household income of a U.S. Open attendee is $216,000. And as the event pushes into its later days, the crowd seemingly becomes more well-heeled and eager to spend. “There aren’t enough high-end offerings we could offer for the second week and the finals sessions. We run out of inventory,” said Corio.

Emirates must see similar demand for its suite: For those who want to gain admission using frequent-flier miles, the “cost” rises to 255,000 miles for some of the later-in-the-tournament sessions. Nevertheless, Emirates officials say the opportunity is worth it.

There has been backlash to the VIP trend. In the rock world, some have said that a music born of rebellion defies the very idea of offerings that cater to the well-heeled and keep the masses at bay.

“It’s so not rock & roll,” said promoter Andy Cirzan in an interview with Rolling Stone magazine. “You’re sitting in 90-degree heat and watching some a–hole sitting in an air-conditioned tent getting a pedicure.”

Still, USTA officials note that even if you can’t afford or gain access to a luxury suite, there is plenty of tennis to be had at the U.S. Open for a reasonable price. Tickets start at $30 per session at the stadiums and a grounds pass goes for as little as $65.

“The U.S. Open caters to a sophisticated crowd, but it also caters to a very broad crowd,” said Chris Widmaier, a spokesman for USTA.