What To Do Before This Market Surge Runs Out Of Gas; Thoughts On Dogecoin 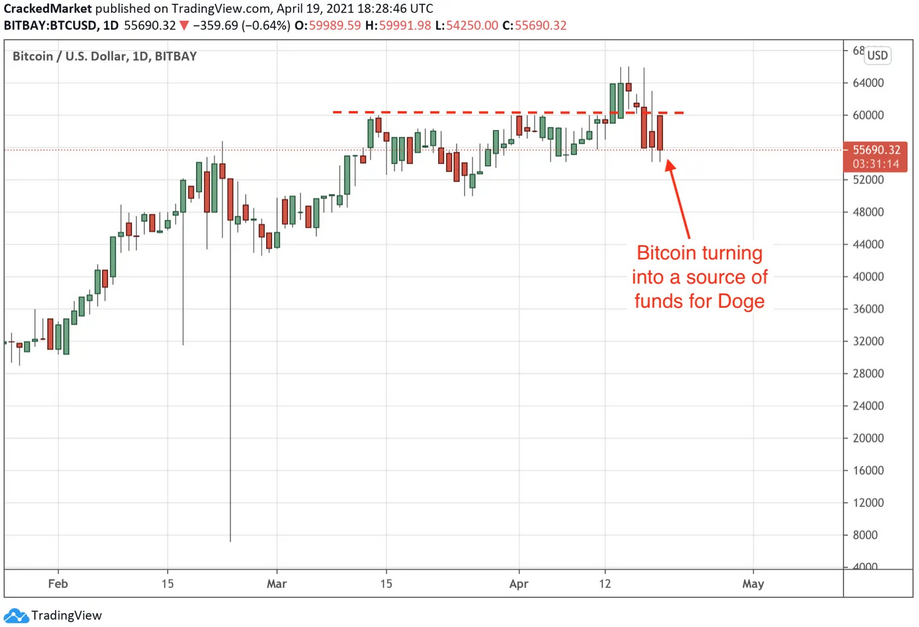 On Monday, the experienced its biggest loss in nearly a month. That said, the “biggest loss” only amounted to a 0.53% decline. This shows just how gentle and benign this rally has become.

Two steps forward, one step back. That’s how this works, always has, always will. While no one is flinching over a 0.53% decline from record highs, there will come a time when these losses start piling up. And by the time people become worried about it, a good amount of damage will have already occured.

Now to be clear, I’m not a bear or anything remotely close. But I’ve been doing this long enough to know this rate of gains cannot continue indefinitely. And once this surge runs out of gas, there are only two options left, sideways or down. Either way, that is a far better time to be locking in profits than adding new money.

For those that have been following these posts for a while, we are sitting on a pile of profits and it is time to get defensive and protect those profits.

Once we give up on the foolish idea of picking tops, we realize the only two choices left are selling too early and selling too late. And as is usually the case in the market, this doesn’t have to be a binary decision. Don’t think all-in and all-out, instead trade in shades of gray.  It is perfectly okay to take some profits and let the rest ride with a trailing stop. That gives us the best of both worlds.

For the time being, I’m holding for higher prices but if I see further weakness and closes near the daily lows, I will start peeling off profits proactively even if my stops haven’t been hit.

And you know what? Once I sell, there is nothing that prevents me from getting back in when prices bounce. It’s like having your cake and eating it too! Never forget, we only make money when we sell our winners.

tumbled under $60k support as it turned into a source of funds to fuel this borderline absurd  rally. While I don’t have a problem buying something that is going up (meaning Dogecoin is a legitimate trade), but that is only as long as people are trading this and not investing in it. As long as a person is agile and willing to take profits, they can ignore all Dogecoin critics. But if a person believes the hype, good luck with that.

As for Bitcoin, the $60k breakout failed and it is best to get defensive until this gets back above $60k. Until then, expect the ride to get bumpy.