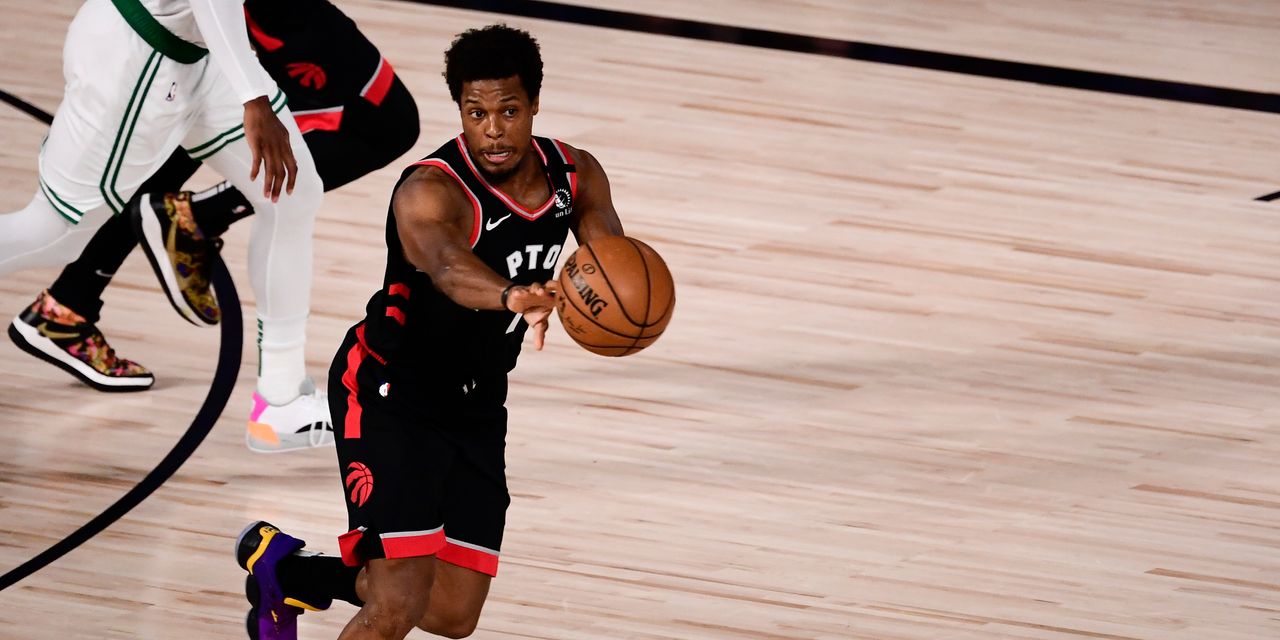 The National Basketball Association will begin training camp for the 2020-2021 NBA season this week, just two months after the Los Angeles Lakers and star LeBron James won a championship in the Disney
DIS,

Like many industries, the NBA as a whole has seen lower revenues due to the coronavirus pandemic, falling short of its revenue projections by $1.5 billion for 2020. Players on one NBA team, however, will see their net income go up due to the pandemic: the Toronto Raptors.

The Raptors are leaving Canada for the 2020-2021 season to play their home games at Amalie Arena in Tampa Bay, Fla. The Raptors will share the space with the NHL’s Tampa Bay Lightning for a portion of next season.

The Canadian government denied the Raptors’ request to play in Toronto this year because it would not be safe for teams to constantly be traveling between the two countries, health officials said.

Some Raptors players will get to keep millions of dollars more from their paychecks as a result.

“These guys are gonna save money,” Robert Raiola, a CPA from PKF O’Connor Davies known as the “Sports Tax Guy” on Twitter
TWTR,
,
told MarketWatch.

See also: Detroit Lions fans donate to Deshaun Watson’s charity after his performance led to the firing of their head coach

The way athletes’ contracts work is they pay taxes based on the state and country each game they play in is located. If a game is in New York, the player’s game check will be taxed according to U.S. and New York state law, for example, and if a game is in Texas, a player’s game check will be taxed in accordance with Texas law. This is often referred to as the “jock tax.”

For next season, the Toronto Raptors home games, which are normally taxed at the “brutally high” Toronto rate, according to Raiola, will be taxed in the U.S., where taxes are lower compared with Canada.

That 16.5% difference in federal taxes between the U.S. and Canada will amount to millions in savings for highly paid Raptors players like Kyle Lowry and Pascal Siakam, who make more than $30 million a season.

For example, the All-Star guard Lowry will save a minimum of $2.475 million from the move.

In addition to lower federal taxes, there is also no state income tax in Florida. This is also a huge savings for some players. At one point, the Raptors considered playing their home games this season in New Jersey, which has a top income tax rate of 10.75% for people who make over $5 million before ultimately deciding to play in Florida. Playing in Florida as opposed to New Jersey will net Lowry an additional $1.613 million in income tax savings as well.

It’s not known how long the Raptors will play in Florida, but the team was denied access to play in Canada for the near future. Raptors President of Basketball operations Masai Ujiri said the team tried to play next season in Toronto, but couldn’t make the situation work.

“Ultimately, the current public health situation facing Canadians, combined with the urgent need to determine where we will play means that we will begin our 2020-21 season in Tampa, Florida,” Ujiri said in a statement.