Wyckoff’s Second Law Now In Play For Bitcoin, Other cryptocurrencies 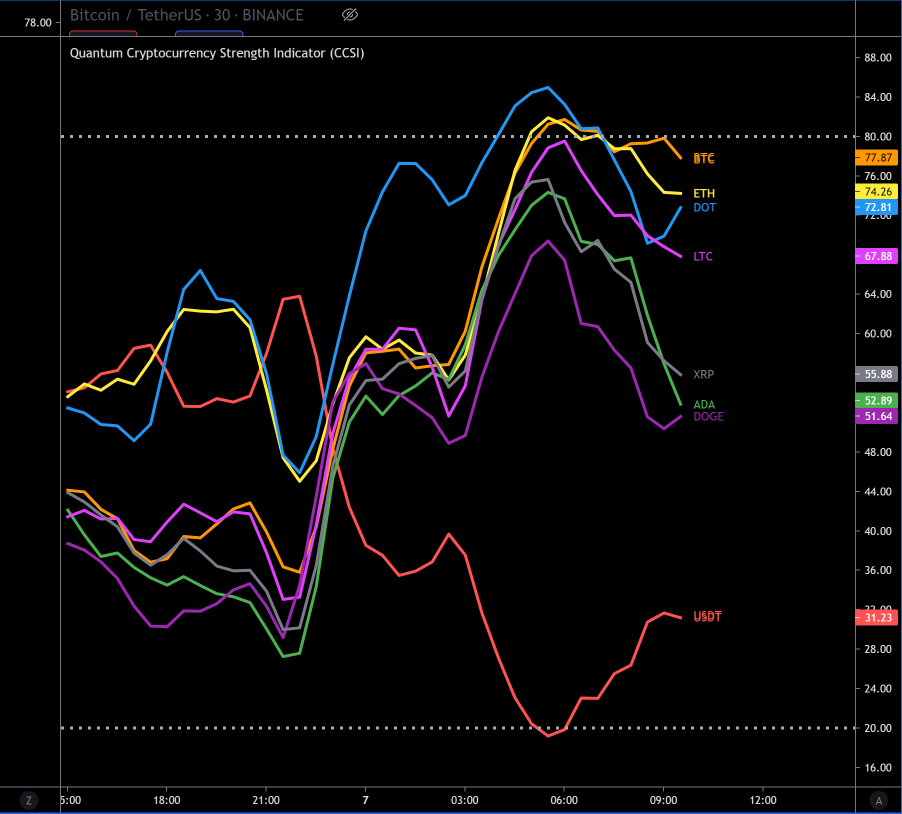 One of the questions I was asked recently following my analysis of on the daily timeframe and the current congestion phases, was: Are all the other cryptocurrencies were moving in the same way?

The short answer is yes.

To show you this visually is a screenshot of the cryptocurrency strength indicator that we have recently launched for TradingView. This displays eight of the most popular cryptocurrencies, including Bitcoin, , and . Each of the lines represents one of the cryptocurrencies. All are based against the U.S. dollar. Here, Tether is the red line. The indicator is also very flexible in that cryptos can be swapped out for any that are on Tradingview. You can find more details about the indicator here.

We can see on the Bitcoin daily chart that little has changed since last week in terms of the floor and ceiling of support and resistance range. Support and resistance remain within the spread of the may 19 volatility candle. However, what has changed is the intraday volatility, which has drained away to virtually nothing. This is noted by the spread of the candles narrowing, and centered on the volume point of control, which is the yellow dashed line on the chart. This is the point at which price agreement has been reached and there is an equilibrium. This currently sits at $35,000 and is confirmed by the deepest volume as shown on the histogram.

This phase of price action and the chart pattern is now a classic example of Wyckoff’s second law, namely, the law of cause and effect. In other words, the greater the cause or the time a market is in congestion, the greater the effect in the resulting price action that follows. You can think of this as a clockwork toy, the more the spring is wound, the tighter it becomes as it stores more energy with every turn. Eventually, when it is fully wound and this stored energy is released, the toy travels a great distance.

In Bitcoin’s case, the price action is storing up energy to be released in an explosive move, as no market can remain range-bound forever. The issue, of course, is we cannot be 100% certain in which direction and this is where an option strategy could provide a solution, albeit a volatile and expensive one. The option strategy in question is the straddle, which is a directionless trade. The strategy pays off regardless of the direction of the breakout, but it’s not that simple, as it is all down to timing. If the market remains range-bound within the period set for the options, then premiums are lost. So it requires a volatile move for this approach to work. And, of course, it’s not always easy to forecast when the break is likely to occur as the options waste away.

Moving to the chart itself, if we consider the volume at the bottom, while there has been buying on each reversal lower, the issue is this has not translated into rising volume and rising prices, which is the classic effort and result we need to see. In fact, since June 21, the volume has been declining. But then this is in line with the narrowing spreads, and may well be a reflection of the summer season when volumes decline naturally.

In summary, when the explosive breakout occurs, the levels of interest for the development of the trend are described by the May 19 volatility candle with the ceiling at $43,500 and the floor at $28,500. Remember, for the breakout to be valid we need to see it accompanied by strong and rising volume. If so, given the time we have been in congestion, expect the trend to have some momentum and last for some time.