The technicals and fundamentals have aligned in XRP’s favor for a potential price rebound.

After the most recent bloodbath that saw nearly $100 billion wiped from the entire cryptocurrency markets, XRP bulls may have found a fundamental reason to push prices back up.

XRP could be ready to rebound following a new development in Ripple’s lawsuit.

The ongoing legal case between Ripple and the Securities and Exchange Commission has taken another turn after Ripple’s legal team accused the SEC of violating Section 17(b) of the Securities Act. The rule requires courts to take judicial notice of facts that are not subject to reasonable dispute and facts from sources that cannot be reasonably questioned.

Although the filing is part of a motion to dismiss the SEC’s claims against Ripple’s executives Brad Garlinghouse and Chris Larsen, it appears that XRP could temporarily benefit from it.

The cross-border remittances token is currently holding above a crucial support area represented by the Tom DeMark (TD) Sequential indicator’s setup trendline at $0.52. More importantly, the TD has presented a buy signal on XRP’s daily chart that could give the token the upward pressure it needs to avoid a catastrophic crash.

The bullish formation developed as a red nine candlestick, suggesting that XRP may rise for one to four daily candlesticks.

If validated, the seventh-largest cryptocurrency by market capitalization would likely surge toward the descending trendline that has been forming since May 20, currently hovering around $0.58, or the death cross between the 50 and 200-day moving average at $0.75. 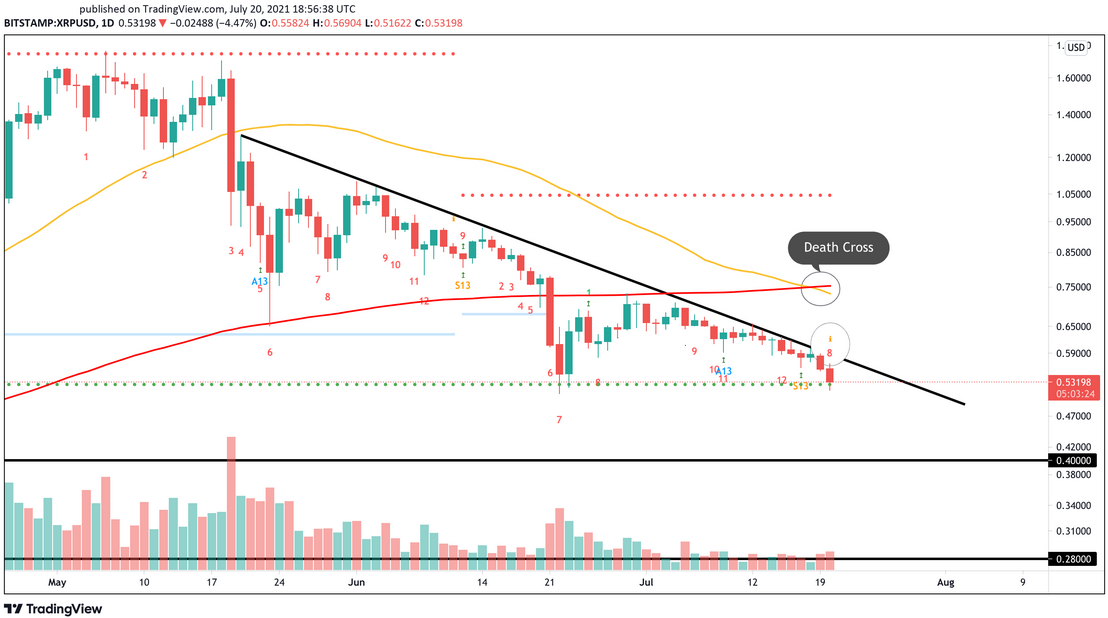 It is worth noting that despite the short-term bullish scenario, the death cross is the governing technical pattern behind XRP’s price action. Some of the most prominent analysts in the industry believe that this is one of the most significant bearish formations marking the beginning of a bear market.

Therefore, investors must pay close attention to the $0.52 support since breaking below this crucial price point could lead to a sell-off. By breaching this demand zone, XRP could be exposed to a nosedive toward $0.40 or even $0.28.