has risen by a whopping 40% in the past 48 hours as exchanges begin to relist the token.

Cryptocurrency exchanges are responding to the market’s demand for XRP. And with some trading platforms already beginning to relist the token, speculators are growing overwhelmingly bullish.

A new update in the SEC v. Ripple case made headlines in late March, luring investors back to XRP.

According to attorney Jeremy Hogan, the U.S. Securities and Exchange Commission implied that exchanges that relist and allow trading of XRP would not violate any guidelines. Under Section 4 of the Securities Act, only Ripple and its affiliates could be accused of illegal sales.

Within minutes after Hogan’s remarks, the hashtag “RelistXRP” was trending on Twitter while the number of related posts skyrocketed.

To gauge their users’ interest, Singapore-based trading platform Phemex recently conducted a survey to understand the market’s demand for XRP. When asked, “do you want Phemex to resume our Ripple XRP offering,” roughly 74% of the 2,500 respondents said “yes.”

Jack Tao, Phemex’s CEO, affirmed that most of the users who have made a deposit and paid trading fees believe that the trading platform should relist XRP.

“We’re very selective and only list projects that are fully vetted with strong potential or outspoken public demand. In the case of XRP, our customers have spoken loud and clear. Through data collated from a series of surveys and polls, our customers wanted XRP back.”

Since relisting XRP, speculators have quickly begun trading the news. A relisting from one exchange suggests other exchanges may also follow suit.

XRP prices were able to rebound from the 200 four-hour moving average and surge by more than 40% in the past 48 hours. The sudden upswing reached a crucial resistance barrier represented by the 61.8% Fibonacci retracement level at $1.45.

The emergence of a sell signal by the Tom DeMark (TD) Sequential indicator suggests that a spike in profit-taking is underway. Indeed, this bearish formation, in the form of a green nine candlestick, often results in a one to four candlesticks pull back. 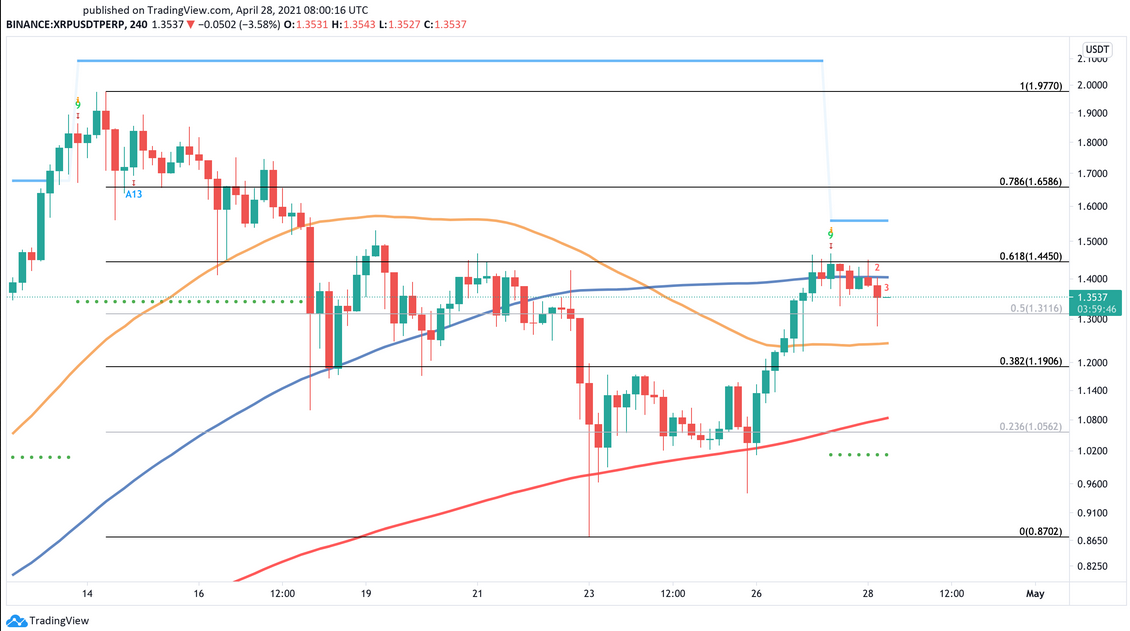 It is worth noting that regardless of the short-term pessimistic outlook, a 4-hour candlestick above the overhead resistance at $1.45 might lead to higher highs.

Breaking through this supply barrier could attract a new wave of speculators that push XRP toward the 76.8% Fibonacci retracement level at $1.66 or Apr. 14’s high of $1.98.