XRP is up more than 180% in the last week and may have more room to rise before a potential correction.

has enjoyed an impressive rally over the past week, hitting a three-year high. Although the technicals point to further gains on the horizon, a particular on-chain metric forecasts an incoming spike in profit-taking.

The cross-border remittances token has disregarded the legal issues that its parent company, , is currently facing in the U.S.

XRP of an inverse head-and-shoulders formation that had been developing on its weekly chart since mid-June 2018. After moving past the pattern’s neckline at $0.60 on Apr. 4, the fourth-largest cryptocurrency by market capitalization surged 180% to a three-year high of $1.72. 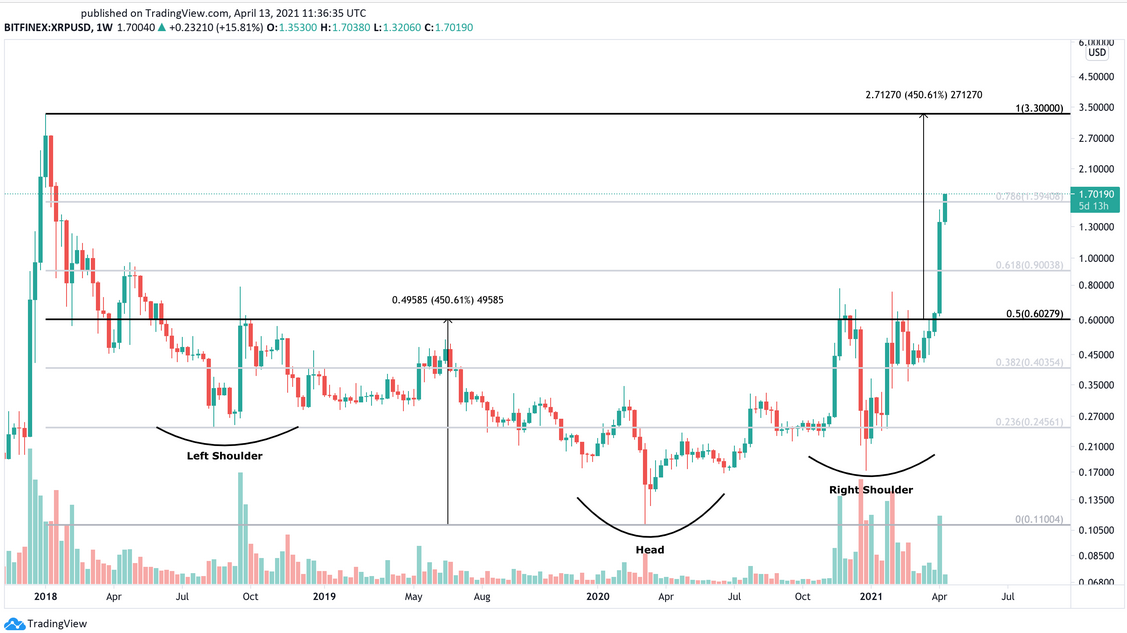 A further increase in buying pressure around the current price levels could push XRP’s price by another 90% toward its Jan. 2018 all-time high of $3.30 or higher.

This target is determined by measuring the height between the pattern’s head and neckline and adding that distance upward from the breakout point.

Although the odds seem to favor the bulls, the Market Value to Realized Value (MVRV) index suggests that a potential spike in profit-taking is near.

For the second time in XRP’s history, the 30-day MVRV moved past the 100% mark. The last time this on-chain metric rose above this milestone was in early January 2018, marking the peak of the 2017 bull market.

Since most of the tokens currently in circulation are profit, XRP holders may be inclined to sell at the current price to grasp some of the gains incurred.

While the 30-day MVRV hovers in the “danger zone” and the legality of Ripple remains uncertain, anyone trading XRP should keep tight stop-loss orders to avoid potential risks.